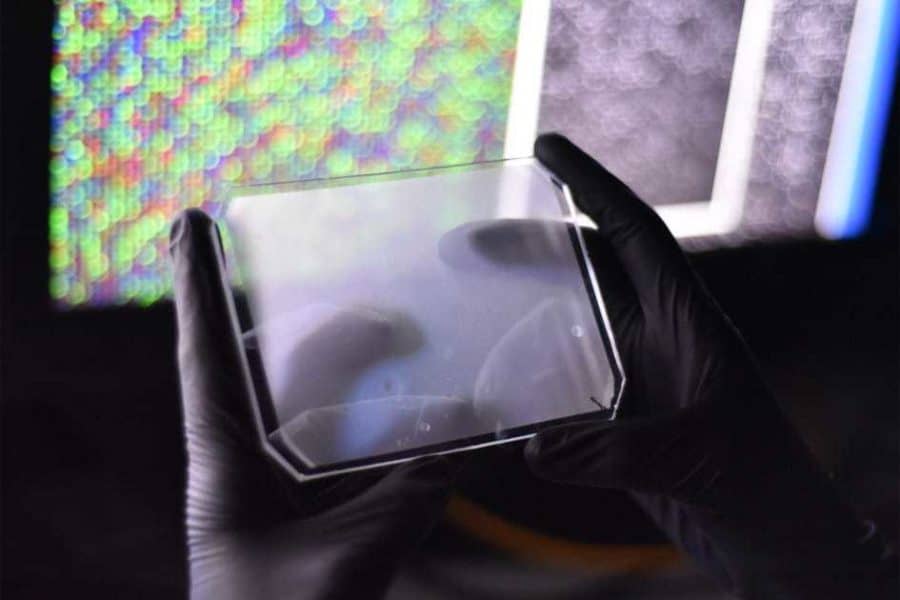 Researchers have developed a new technology that flexibly scales up CRISPR-based molecular diagnostics, using microfluidics chips that can run thousands of tests simultaneously. A single chip’s capacity ranges from detecting a single type of virus in more than 1,000 samples at a time to searching a small number of samples for more than 160 different viruses, including the COVID-19 virus.

The work appears in Nature, led by co-first authors Cheri Ackerman and Cameron Myhrvold, both postdoctoral fellows at the Broad Institute of MIT and Harvard. Paul Blainey, core member of the Broad Institute and associate professor in the Department of Biological Engineering at MIT, and Pardis Sabeti, institute member at Broad, professor at Harvard University, and Howard Hughes Medical Institute Investigator, are co-senior authors.

“The current pandemic has only underscored that rapid and sensitive tools are critical for diagnosing, surveilling, and characterizing an infection within a population,” said Sabeti. “The need for innovative diagnostics that can be applied broadly in communities has never been more urgent.”

“CRISPR-based diagnostics are an attractive tool for their programmability, sensitivity, and ease of use,” said Myhrvold. “Now, with a way to scale up these diagnostics, we can explore their potential for comprehensive approaches — for example, enabling clinicians to see if patients are harboring multiple infections, to rule out a whole panel of diseases very quickly, or to test a large population of patients for a serious infection.”

To build a testing platform with this capacity, the team turned to microfluidics, adapting and improving on technology developed in 2018 by Blainey’s lab. The researchers created rubber chips, slightly larger than a smartphone, with tens of thousands of “microwells” — small compartments designed to each hold a pair of nanoliter-sized droplets. One droplet contains viral genetic material from a sample, and the other contains virus-detection reagents.

“The current pandemic has only underscored that rapid and sensitive tools are critical for diagnosing, surveilling, and characterizing an infection within a population.”

“The microwell chips are made like a stamp — it’s rubber poured over a mold,” explained Ackerman. “We’re easily able to replicate and share this technology with collaborators.”

The detection approach used on the chips is adapted from the CRISPR-based diagnostic SHERLOCK, first described in 2017 and developed by team of scientists from the Broad Institute, the McGovern Institute for Brain Research at MIT, the Institute for Medical Engineering & Science at MIT, and the Wyss Institute for Biologically Inspired Engineering at Harvard University.

To use the CARMEN platform, researchers first extract viral RNA from samples and make copies of this genetic material, similar to the preparation process for RT-qPCR diagnostics currently used for suspected COVID-19 cases. The researchers then add a unique fluorescent color dye to each prepared sample and divide the mixture into tiny droplets.

The detection mixtures, on the other hand, contain the CRISPR protein Cas13, a guide RNA that looks for a specific viral sequence, and molecules to report the results. These mixtures are also color-coded and separated into droplets.