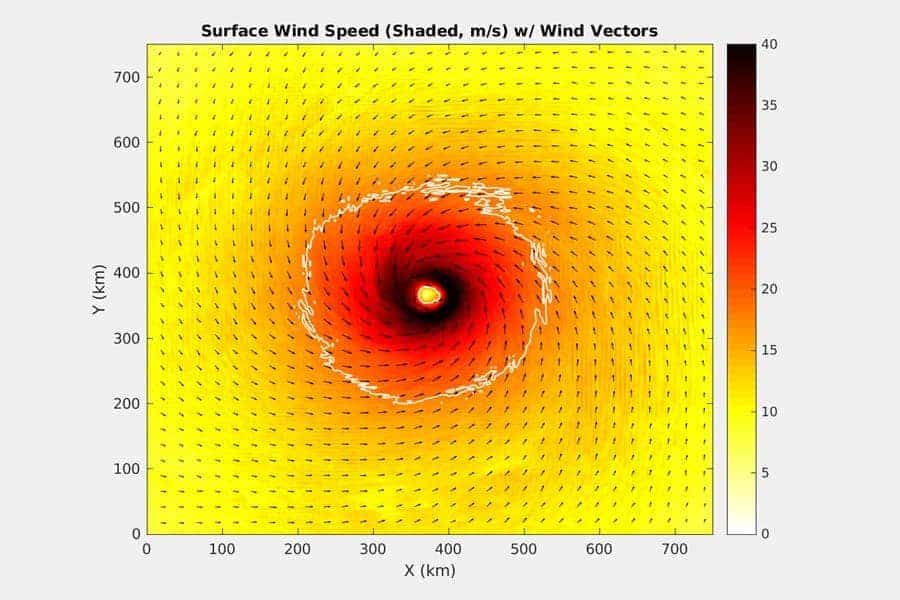 You’ve probably seen the satellite images that show a hurricane developing: thick white clouds clumping together, arms spinning around a central eye as it heads for the coast.

After decades of research, meteorologists still have questions about how hurricanes develop. Now, Florida State University researchers have found that even the smallest changes in atmospheric conditions could trigger a hurricane, information that will help scientists understand the processes that lead to these devastating storms.

“The whole motivation for this paper was that we still don’t have that universal theoretical understanding of exactly how tropical cyclones form, and to really be able to forecast that storm-by-storm, it would help us to have that more solidly taken care of,” said Jacob Carstens, a doctoral student in the Department of Earth, Ocean and Atmospheric Science.

The research by Carstens and Assistant Professor Allison Wing has been published in the Journal of Advances in Modeling Earth Systems.

Current theories on the formation of hurricanes agree that some sort of disturbance must exist to start the process that leads to a hurricane. Carstens used numerical models that started with simple conditions to better understand exactly how those disturbances arise.

“We’re trying to go as bare bones as possible, looking at just how exactly clouds want to organize themselves without any of these external factors playing into it to form a tropical cyclone more efficiently,” he said. “It’s a way we can further round out our broader understanding and look more purely at the actual tropical cyclones themselves rather than the surrounding environment’s impact on it.”

The simulations started with mostly uniform conditions spread across the imaginary box where the model played out. Then, researchers added a tiny amount of random temperature fluctuations to kickstart the model and observed how the simulated clouds evolved.

Despite the random start to the simulation, the clouds didn’t stay randomly arranged. They formed into clusters as the water vapor, thermal radiation and other factors interacted. As the clusters circulated through the simulated atmosphere, the researchers tracked when they formed hurricanes. They repeated the model at simulated latitudes between 0.1 degrees and 20 degrees north, representative of areas such as parts of western Africa, northern South America and the Caribbean. That range includes the latitudes where tropical cyclones typically form, along with latitudes very close to the equator where their formation is rare and less studied.

The scientists found that every simulation in latitudes between 10 and 20 degrees produced a major hurricane, even from the stable conditions under which they began the simulation. These came a few days after a vortex first emerged well above the surface and affected its surrounding environment.

They also showed the possibility of cloud interaction contributing to the development of a tropical cyclone very close to the equator, which rarely occurs in nature but has still been observed as close as 1.4 degrees north away.

Hurricanes are dangerous weather events. Forecasting can help prevent deaths, but a big storm can still cause billions of dollars in damage. A better theoretical understanding of their formation will help meteorologists predict and prepare for these storms, both in short-term forecasts and long-term climate projections, and communicate their understanding to the public.

“It’s becoming ever more important in our field that we connect with emergency managers, the general population and other local officials to advise them on what they can expect, how they should prepare and what sorts of impacts are going to be heading their way,” Carstens said. “A more robust understanding of how tropical cyclones form can help us to better forecast their location, their track and their intensity. It really goes down the line and helps us to communicate sooner as well as more efficiently and eloquently to the public that really needs it.”