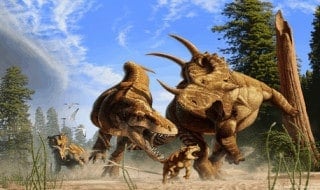 While smaller dinosaurs needed speed, huge predators like T. rex were optimized for energy-efficient walking, according to a study published in PLOS ONE.

Theropod dinosaurs included the dominant bipedal predators of the Mesozoic Era, and plenty of research has explored the relationship between their locomotion and lifestyle. Much of this work has focused on running speeds, but in a new study, Alexander Dececchi of Mount Marty College, South Dakota and colleagues argue that speed might not be the most important factor, especially for the biggest theropods.

The authors gathered data on limb proportions, body mass, and gaits of more than 70 species of theropod dinosaurs. They then applied a variety of methods to estimate each dinosaur’s top speed as well as how much energy they expended while moving around at more relaxed walking speeds. Among smaller to medium-sized species, longer legs appear to be an adaptation for faster running, in line with previous results. But for the real titans weighing over 1000kg, top running speed is limited by body size, so longer legs instead correlated with low-energy walking.

“Using locomotion models from a wide range of living animals, we were able to tease apart some dramatic differences in both running speeds and running efficiencies in carnivorous dinosaurs,” says Hans Larsson, Director of McGill’s Redpath Museum and one of the authors of the new study. Running is important for hunters, but they generally spend much more time roaming around in search of food. The authors suggest that while speed was a major advantage for dinosaurs who needed to hunt prey and also escape predators, the biggest theropods relied more on efficiency while foraging. Among giant theropods, the champions were tyrannosaurs like T. rex, whose long legs were apparently well-adapted for reduced energy expenditure while prowling for prey.

“Large bodied tyrannosaurs had distinctly efficient locomotion, even at multi-ton scales. This, coupled with our estimates of them running about 20 km/h would have made them terrifying endurance predators – kind of like a pack of wolves, but with 6 inch long teeth in a mouth that could crush cars!,” adds Larsson, who is also the Canada Research Chair in Vertebrate Paleontology.

“The fast and the frugal: Divergent locomotory strategies drive limb lengthening in theropod dinosaurs” by Alexander Dececchi et al. was published in PLOS ONE.
https://doi.org/10.1371/journal.pone.0223698

The author(s) received no specific funding for this work.