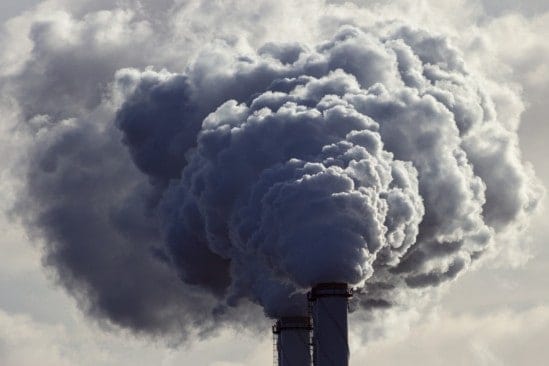 Call them “super polluters” — the handful of industrial facilities that emit unusually high levels of toxic chemical pollution year after year. There are only a few of them, but together they account for the majority of annual industrial pollution.

Such is the key finding and major takeaway from a new paper published in the journal Environmental Research Letters.

“This pattern had previously been identified in one industry at one point in time, but the pushback was, ‘Well, that’s an exception.’ What we showed is that it’s not the exception, it’s the rule,” said co-lead author and environmental sociologist Simone Pulver, of UC Santa Barbara.

The study by Pulver and Mary Collins of State University New York, Syracuse, is the first to establish disproportionality in the production of toxic pollution both across a wide range of industries and over an extended period of time.

The researchers examined U.S. Environmental Protection Agency (EPA) data, spanning the years 1998 to 2012, on toxic releases from more than 25,000 facilities in 322 manufacturing industries.

The results are striking.

“The more you compare like facilities, the more you see a handful of facilities are accounting for the majority of the toxic pollution emitted in one year from that industry,” said Pulver, an associate professor of environmental studies. “It’s a consistent pattern across a wide range of industries. It’s an egregious pattern because it’s really extreme, and it’s an incredibly stable pattern over time.”

Said lead author Collins, “Not all polluters are the same, even those who seem like they should be, because they operate in the same industry, produce similar goods, et cetera. Instead, a small group generate much more harm than the rest. This finding is not entirely new, but with Simone and our two graduate students (Dustin Hill and Ben Manski), we show that this is widely true across industries and time.”

The research has significant implications for the regulation of toxic pollution and suggests that major reductions to pollution could be achieved by focusing on a relatively small number of facilities doing the most polluting.

As Collins explained, “there are a handful of facilities that alone generate more than 50 percent of their entire industry’s emissions.”  Of the more than 25,000 facilities analyzed, 1,116 can be characterized as egregious polluters, defined as single facilities that generated 50% or more of the total annual hazard within an industry.

“But it’s complicated,” Pulver noted. Making it so, among other complexities, is that it’s not always the same facilities each year doing the egregious polluting. Of the group of super polluting facilities, the researchers noted, only 31 facilities are “consistently egregious polluters within their industries throughout the study period.”

In their study, Collins and Pulver looked at more than 300 industries that reported toxic emissions, had more than five facilities reporting emissions each year and had data about their employees, overall providing a solid characterization of the U.S. manufacturing sector.

The researchers were careful to compare things as similar as possible, such as facilities making the same product and with access to the same technology, and to control for facility size.

Finding that “the generation of environmental harm is not distributed equally across units but rather concentrated within a small group of egregious actors,” their results challenge the presumption of proportionality between economic activity and environmental harm.

“Even with all the controls — the same business done in the same way — you see this real inequality,” Pulver said. “A lot of facilities are not producing much toxic pollution at all to make their product, while a small handful are producing a whole lot of toxic pollution to do the exact same thing.”

“You expect inequality when you look at the economy as a whole — there are more resource intensive businesses, things are not evenly distributed in nature, and so on,” she continued. “But that’s why I find this pattern so surprising. We expected to see some of it but not for it to be this extensive.”

Some interesting details: The highest level of disproportionality uncovered by the researchers was in the “All Other Basic Inorganic Chemical Manufacturing” category; the lowest was in industrial mold manufacturing. The biggest increase in inequality, over the course of the study, occurred in bitumous coal underground mining.

Taken altogether, the findings have both scholarly and policy implications for the nature of pollution generation, for the role of targeting in environmental regulatory decision-making and for efforts by environmental advocates, according to the authors.

“There are some facilities where there are real opportunities for learning and improvements to bring them in line with other facilities in their industries,” Pulver said. “There is a standard that’s possible in terms of damage to environment, and that standard is demonstrated by a vast majority of facilities. Here is an opportunity to get that handful of facilities up to that standard.”

Although this paper is the first to empirically document this disproportionality across a wide range of industries and across time, the notion that this pattern may exist was posited in 2005 by another UC Santa Barbara environmental sociologist, Bill Freudenburg, Collins’ dissertation advisors and Pulver’s mentors.

“His was the first paper that put this idea on the map,” Pulver said. “So there is a long, great history of this research here at UC Santa Barbara.”

1 thought on “Small number of industrial facilities emit the majority of toxic pollution, year after year”