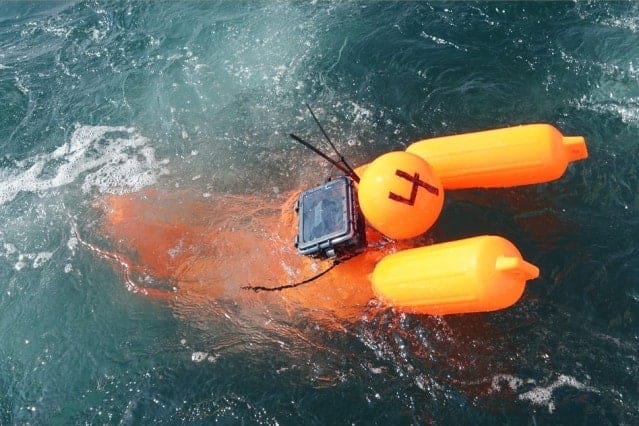 The ocean is a messy and turbulent space, where winds and weather kick up waves in all directions. When an object or person goes missing at sea, the complex, constantly changing conditions of the ocean can confound and delay critical search-and-rescue operations.

Now researchers at MIT, the Swiss Federal Institute of Technology (ETH), the Woods Hole Oceanographic Institution (WHOI), and Virginia Tech have developed a technique that they hope will help first responders quickly zero in on regions of the sea where missing objects or people are likely to be.

The technique is a new algorithm that analyzes ocean conditions such as the strength and direction of ocean currents, surface winds, and waves , and identifies in real-time the most attracting regions of the ocean where floating objects are likely to converge.

The team demonstrated the technique in several field experiments in which they deployed drifters and human-shaped manikins in various locations in the ocean. They found that over the course of a few hours, the objects migrated to the regions that the algorithm predicted would be strongly attracting, based on the present ocean conditions.

The algorithm can be applied to existing models of ocean conditions in a way that allows rescue teams to quickly uncover hidden “traps” where the ocean may be steering missing people at a given time.

“This new tool we’ve provided can be run on various models to see where these traps are predicted to be, and thus the most likely locations for a stranded vessel or missing person,” says Thomas Peacock, professor of mechanical engineering at MIT. “This method uses data in a way that it hasn’t been used before, so it provides first responders with a new perspective.”

Peacock and Pierre Lermusiaux, also a professor of mechanical engineering at MIT, who oversaw the project, and their colleagues report their results in a study published today in the journal Nature Communications. Their coauthors are lead author Mattia Serra and corresponding author George Haller of ETH Zurich, Irina Rypina and Anthony Kirincich of WHOI, Shane Ross of Virginia Tech, Arthur Allen of the U.S. Coast Guard, and Pratik Sathe of the University of California at Los Angeles.

Today’s search-and-rescue operations combine weather forecasts with models of both ocean dynamics and the ways in which objects can drift through the ocean, to map out a search plan, or regions where teams should concentrate their search.

But the ocean is a complicated space of unsteady, ever-changing flow patterns. Coupled with the fact that a missing person has likely been continuously floating through this unsteady flow field for some time, Peacock and his colleagues say that significant errors can accumulate in predicting where to look first, when using a simple approach that directly predicts the trajectories of a few drifting objects.

Instead, the team developed a method to interpret the ocean’s complex flows using advanced, data-driven ocean modeling and prediction systems. They used a novel “Eulerian” approach, in contrast to more commonly used “Lagrangian” approaches — mathematical techniques that involve integrating snapshots of the ocean velocity due to waves and currents to slowly generate an uncertain trajectory for where a missing person or object may have been carried.

The new Eulerian approach uses the most reliable velocity forecast snapshots, close to the point where a missing person or object was last seen, and quickly uncovers the most attracting regions of the ocean at a given time. These Eulerian predictions are then continuously updated when the next batch of updated velocity information becomes available.

The team has named their approach TRAPS, for its goal of identifying TRansient Attracting Profiles, or short-lived regions where water may converge and be likely to pull objects or people. The method is based on a recent mathematical theory,

“We were a bit skeptical whether a mathematical theory like this would work out on a ship, in real time,” Haller says. “We were all pleasantly surprised to see how well it repeatedly did.”

“We can think of these ‘traps’ as moving magnets, attracting a set of coins thrown on a table. The Lagrangian trajectories of coins are very uncertain, yet the strongest Eulerian magnets predict the coin positions over short times,” Serra says.

“The key thing is, the traps may not have any signature in the ocean current field,” Peacock adds. “If you do this processing for the traps, they might pop up in very different places from where you’re seeing the ocean current projecting where you might go. So you have to do this other level of processing to pull out these structures. They’re not immediately visible.”

Led by WHOI sea-going experts, the researchers tested the TRAPS approach in several experiments out at sea. “As with any new theoretical technique, it is important to test how well it works in the real ocean,” Rypina says.

In 2017 and 2018, the team sailed a small research vessel several hours out off the coast of Martha’s Vineyard, where they deployed at various locations, an array of small round buoys, and manikins.

“These objects tend to travel differently relative to the ocean because different shapes feel the wind and currents differently,” Peacock says. “Even so, the traps are so strongly attracting and robust to uncertainties that they should overcome these differences and pull everything onto them.”

The team ran their modeling and prediction systems, forecasting the ocean’s behavior and currents, and used the TRAPS algorithm to map out strongly attracting regions over the course of the experiment. The researchers let the objects drift freely with the currents for a few hours, and recorded their positions via GPS trackers, before retrieving the objects at the end of the day.

“With the GPS trackers, we could see where everything was going, in real-time,” Peacock says. “So we laid out this initial, widespread pattern of the drifters, and saw that, in the end, they converged on these traps.”

The researchers are planning to share the TRAPS method with first responders such as the U.S. Coast Guard, as a way to speed up search-and-rescue algorithms, and potentially save many more people lost at sea.

“People like Coast Guard are constantly running simulations and models of what the ocean currents are doing at any particular time and they’re updating them with the best data that inform that model,” Peacock says. “Using this method, they can have knowledge right now of where the traps currently are, with the data they have available. So if there’s an accident in the last hour, they can immediately look and see where the sea traps are. That’s important for when there’s a limited time window in which they have to respond, in hopes of a successful outcome.”