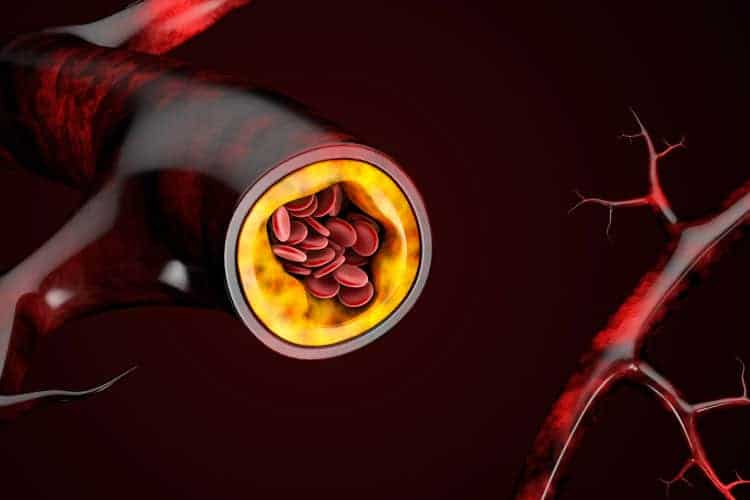 Disrupted nightly sleep and clogged arteries tend to sneak up on us as we age. And while both disorders may seem unrelated, a new UC Berkeley study helps explain why they are, in fact, pathologically intertwined.

UC Berkeley sleep scientists have begun to reveal what it is about fragmented nightly sleep that leads to the fatty arterial plaque buildup known as atherosclerosis that can result in fatal heart disease.

“We’ve discovered that fragmented sleep is associated with a unique pathway — chronic circulating inflammation throughout the blood stream — which, in turn, is linked to higher amounts of plaques in coronary arteries,” said study senior author Matthew Walker, a UC Berkeley professor of psychology and neuroscience.

The findings, published today, June 4, in the journal PLOS Biology, adds poor sleep as a key risk factor for cardiovascular disease, which ranks as the top killer of Americans, with some 12,000 deaths each week — although COVID-19, which has killed, on average, 1,000 a day during the pandemic in the U.S., comes close.

“To the best of our knowledge, these data are the first to associate sleep fragmentation, inflammation and atherosclerosis in humans,” said study lead author Raphael Vallat, a postdoctoral researcher in Walker’s Center for Human Sleep Science at UC Berkeley.

Using statistical modeling, the researchers analyzed the diagnostic data of more than 1,600 middle-aged and older adults using a national dataset known as the Multi-Ethnic Study of Atherosclerosis.

To isolate the effect of sleep quality on heart health, the study controlled for age, ethnicity, gender, body mass index, sleep disorders, blood pressure and high-risk behaviors such as smoking.

The researchers then tracked the results of the study participants, analyzing their blood tests, their calcium scores that can gauge plaque buildup, as well as several different measures of sleep, including wristwatch-assessed sleep across a week and a night in a sleep laboratory that measured electrical brainwave signals.

“In revealing this link with chronic inflammation, the findings suggest a missing middleman that is brokering the bad deal between fragmented sleep and the hardening of blood vessels,” Walker said.

“Indeed, these associational results in humans mirror recent data in which experimentally manipulated sleep disruption in mice led to higher levels of circulating inflammation that caused atherosclerotic lesions in the rodents,” added Vallat.

“The insidious nature of the disease requires that we pay extra attention to our sleep hygiene, even starting in early to midlife,” said study co-lead author Vyoma Shah, a doctoral student in Walker’s lab.

To more accurately gauge one’s sleep quality, the researchers recommend the use of clinical grade sleep trackers, because the study found that people’s subjective assessments of their sleep were not reliable.

“If you track your sleep patterns using objective measures, the same way you track your weight, blood pressure or cholesterol, you can make modifications to your sleep habits, which could make a tangible difference to later life health outcomes,” said Shah.

With chronic inflammation shaping up to be a bridge connecting poor sleep to cardiovascular disease, it’s worth exploring its role in a plethora of other diseases where inflammation is known to be a possible factor, the researchers said.

“This link between fragmented sleep and chronic inflammation may not be limited to heart disease, but could include mental health and neurological disorders, such as major depression and Alzheimer’s disease,” Walker said. “These are new avenues we must now explore.”

In addition to Walker, Vallat and Shah, co-authors of the study are Susan Redline at Harvard Medical School and Peter Attia, founder of Attia Medical, a medical practice focused on the science of longevity.