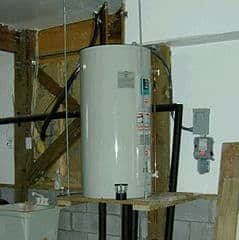 Natural gas. It is used to dry our clothes, cook our food, heat our water and warm our homes. All true.

But, from an air quality standpoint, how clean-burning or unhealthy are the gas-fired appliances that we use?

As far as unhealthy indoor air quality from natural gas-powered appliance use goes, the Sierra Club offers some important low-down.

“The gas-fired appliances found in 90 percent of Californian’s [sic] homes cause unhealthy air and drive annual healthcare costs into the billions [of dollars], according to new research from UCLA [University of California at Los Angeles] Fielding School of Public Health. The value of clean air has never been more clear as families stay at home to avoid COVID-19, but gas-fired furnaces, water heaters, and cooking appliances release thousands of tons of harmful pollutants into the air each year,” the Sierra Club stated in its Apr. 28, 2020 “Report: Unhealthy air in 90% of California homes that cook with gas; those living in apartments especially at risk” press release.

So, it isn’t that natural gas per se is the bad guy. Rather, the onus here is on older, gas-fired appliances and how in the majority of California homes where such devices are used, or so it would appear, air quality produced from these, just doesn’t measure up.

“Specifically, the report finds that cutting the pollution caused by burning gas in our homes would lead to the following annual outcomes:

“The report also finds that the low-income and environmental justice communities that breathe the worst air outside their homes are the most at risk from gas-fired appliance pollution inside their homes. These Californians typically live in smaller homes with older appliances and they are more likely to be renters without control over their appliances, so they are in most need of action on this issue from policymakers,” the Sierra Club in the press release in question submitted.

“‘California’s state agencies often focus on greenhouse gas emissions and climate change impacts, but there has been much less focus on how fossil fuel use in household appliances can adversely impact indoor air quality and public health,’ said lead researcher and UCLA Fielding School of Public Health Professor Yifang Zhu. ‘The goal of this report is to provide information to Californians on how pollution from gas-fired appliances affects the air they breathe, and the related health effects,” Zhu’s declaration as presented in the release.

And, it doesn’t end with just that – there is more.

“This month, the Harvard T.H. Chan School of Public Health released a report about how exposure to [fine] particulate matter (PM 2.5), a key pollutant from homes with gas-fired appliances, is associated with an increase in the COVID-19 death rate, highlighting just how dangerous prolonged exposure to gas pollution is to the health and well-being of Californians,” the Sierra Club emphasized in the release.

On that note, a swap to all-electric appliances used in place of those that operate using natural gas seems the natural course of action to follow.

But, replacement of such presents problems of its own.

Rachel Golden, the Sierra Club’s building electrification program deputy director, in speaking to that issue in the release, adds: ‘‘The public health and air quality benefits of switching from gas-fired appliances to emissions-free, all-electric appliances will not be realized at the pace or scale needed without support from California’s policymakers and regulators.’”

For more on this matter, see: “Report: Unhealthy air in 90% of California homes that cook with gas; those living in apartments especially at risk” press release here.