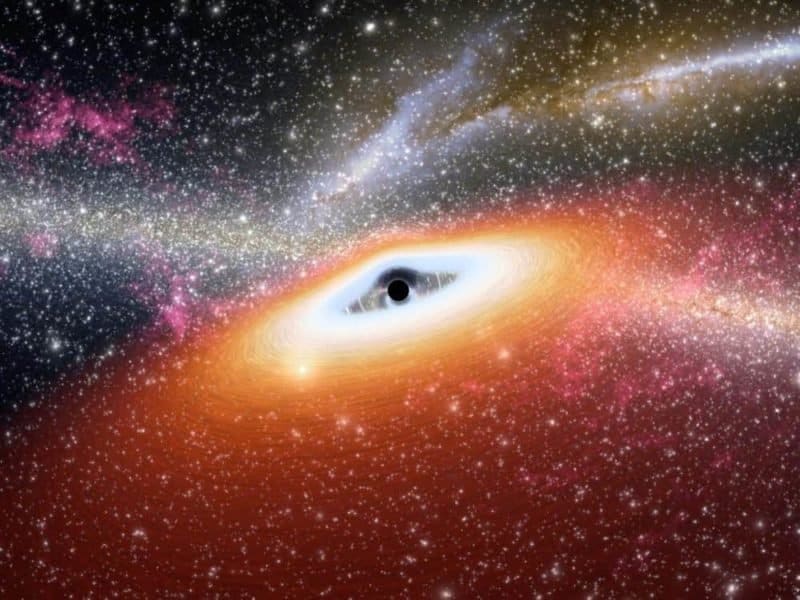 This artist's conception illustrates one of the most primitive supermassive black holes known (central black dot) at the core of a young, star-rich galaxy. Astronomers using NASA's Spitzer Space Telescope have uncovered two of these early objects, dating back to about 13 billion years ago. The monstrous black holes are among the most distant known, and appear to be in the very earliest stages of formation, earlier than any observed so far. Unlike all other supermassive black holes probed to date, this primitive duo, called J0005-0006 and J0303-0019, lacks dust. As the drawing shows, gas swirls around a black hole in what is called an accretion disk. Usually, the accretion disk is surrounded by a dark doughnut-like dusty structure called a dust torus. But for the primitive black holes, the dust tori are missing and only gas disks are observed. This is because the early universe was clean as a whistle. Enough time had not passed for molecules to clump together into dust particles. Some black holes forming in this era thus started out lacking dust. As they grew, gobbling up more and more mass, they are thought to have accumulated dusty rings. This illustration also shows how supermassive black holes can distort space and light around them (see warped stars behind black hole). Stars from the galaxy can be seen sprinkled throughout, and distant mergers between other galaxies are illustrated in the background. 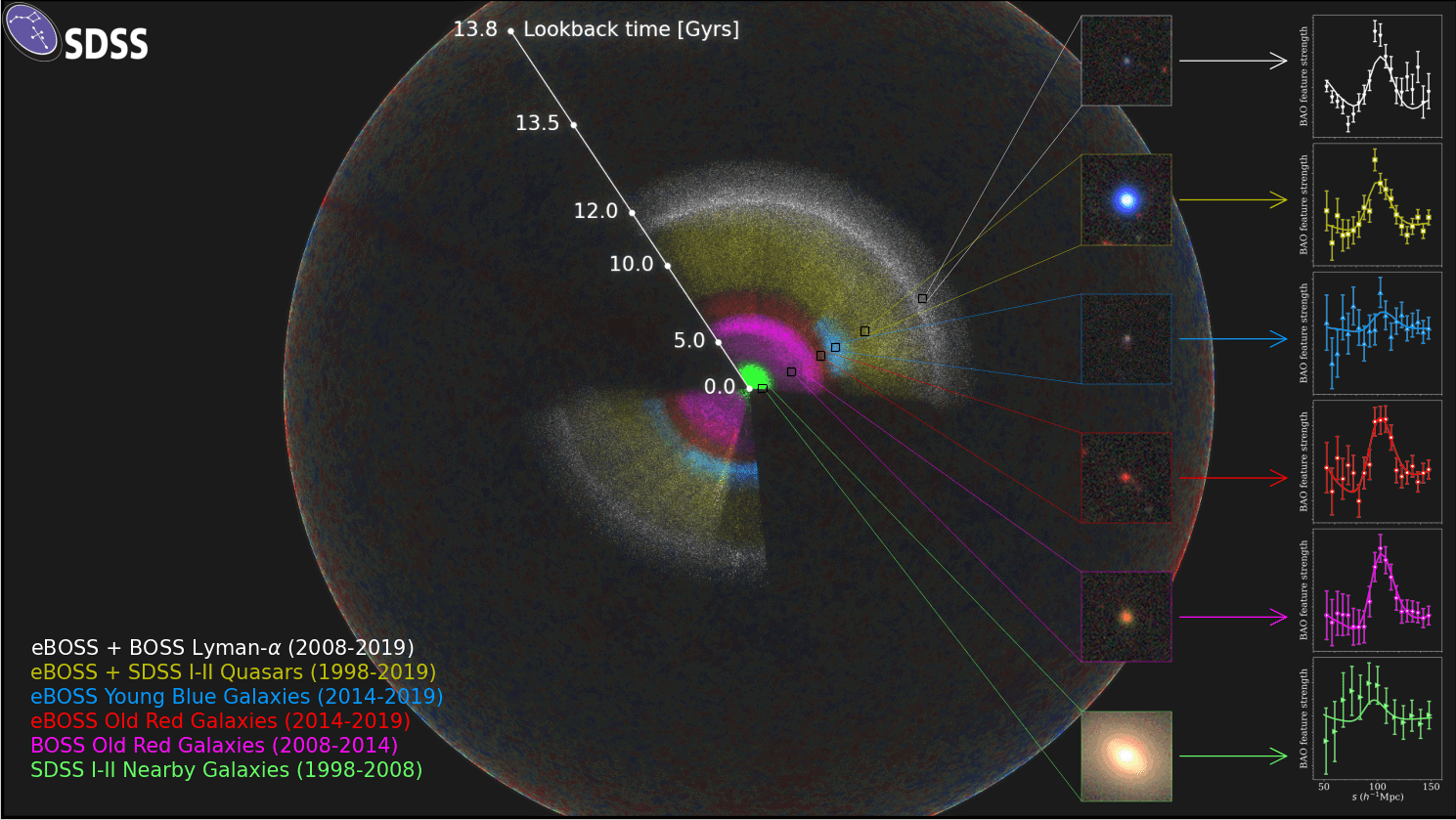 A new three-dimensional map, built after decades of collecting and analyzing data from the skies, shows how the universe has changed and expanded over an 11-billion-year period.

The map, published online late Sunday, is the largest 3D map of the universe ever created, and shows that about 6 billion years ago, the universe began accelerating more rapidly than it had in the 8 billion years that came before.

The map and the analyses that went into making it are the final results of an international collaboration of more than 100 astrophysicists. The work resulted in at least 23 academic papers posted late Sunday to the arXiv pre-print server, along with the map. The collaboration, called “eBOSS,” for Extended Baryon Oscillation Spectroscopic Survey, used quasars and faint galaxies to extend previous maps.

“One of the things we want to learn about is the time evolution of dark energy – this mysterious thing that is causing the universe to accelerate,” said Ashley Ross, the project’s catalog scientist and a lead author on one of the papers released last night. Ross is also a research scientist at The Ohio State University Center for Cosmology and Astroparticle Physics.

This survey offered new insights into how the universe expanded during a time period that had been under-studied and provides detailed measurements of more than 2 million galaxies.

Prior to eBOSS, scientists knew where objects like galaxies and quasars were in the sky as viewed from Earth – essentially a two-dimensional map of the cosmos. This survey added the distance to each object, allowing scientists to build a 3D model. This map covers more of the universe – and more time – than any map previously created.

“Ohio State scientists have made many critical contributions to the Sloan Survey over the past two decades, and it’s great to see all that hard work on instruments and analysis tools pay off in the most precise measurements ever made of the cosmic expansion history,” said David Weinberg, distinguished university professor, chair of the Ohio State astronomy department and a researcher who has worked on the Sloan Digital Sky Survey, one of the largest international attempts to map the cosmos, since just after its inception in the early 1990s.

That meant that cosmologists and astronomers knew the basics of how the universe expanded over the last few billion years. They also had good information about how the universe looked in the beginning because of scientific studies that assessed the elements created after the Big Bang. But until this survey, there had been a gap in that knowledge that began about 300,000 years after the universe began.

The eBOSS project mapped galaxies and quasars 7 to 11 billion light years away – meaning the light the project captured existed 7 to 11 billion years in the past. And they saw that the universe’s expansion accelerated during that time.

“This is the era when the expansion of the universe changed from slowing down to speeding up,” Weinberg said.

The eBOSS measurements confirm the picture of dark energy suggested by previous measurements, showing that it correctly predicted the cosmic expansion at these intermediate times. But they also amplify a tension with other measurements of the universe’s expansion rate today, a quantity referred to as the Hubble Constant. Scientists for years have debated the Hubble Constant’s true value. This survey showed a discrepancy in the measured expansion rates, something for which the researchers have no easy answers.

“Cosmologists are fiercely debating whether this conflict is an error in the measurements or is telling us something new about fundamental physics,” Ross said.

Ross said the results published by eBOSS on Sunday open the door for deeper analysis and more precise measurements of the universe’s expansion. A new project, called the Dark Energy Spectroscopic Instrument – another international project in which Ohio State astronomers and physicists are deeply involved – is already underway in an attempt to collect more detailed data.