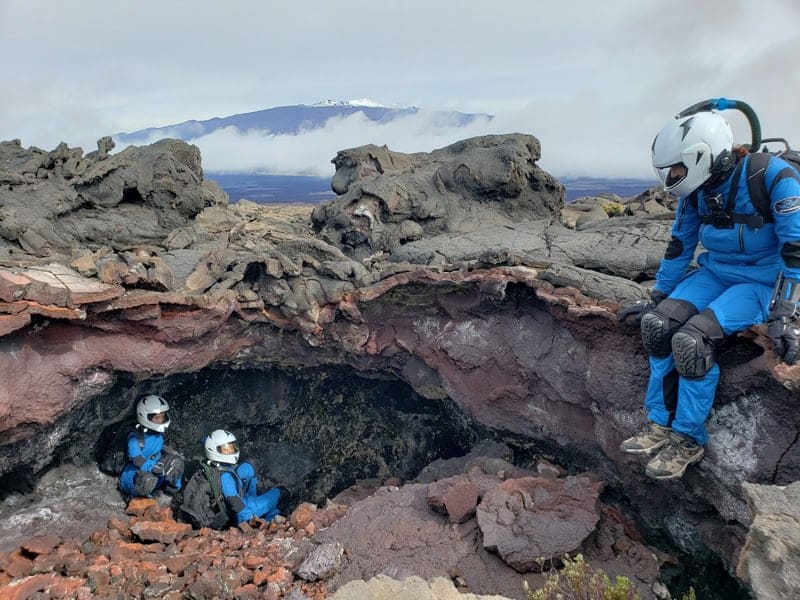 When Adriana Blachowicz PhD ’19 decided to go into strict isolation from the outside world, it wasn’t in response to a global pandemic. She was preparing for another planet altogether.

Blachowicz was part of the inaugural all-female Sensoria team, a privately funded program to simulate the experience of living in a Mars colony. In January, she and five other scientists and engineers isolated themselves for two weeks in a remote dome in Hawaii. The site perched 8,200 feet above sea level on the barren slope of Mauna Loa, an active volcano.

Along with experiments on vertical gardening, microbiology and regenerating plant material, the crew explored leadership and team cohesion, art and even how mortality and burial rituals might be addressed in space or on other planets.

“One of my scientific interests was to understand how the dome’s microbiome — that includes all bacteria and fungi — changed with human presence throughout the mission,” says Blachowicz, the crew’s science officer and a postdoctoral researcher at NASA’s Jet Propulsion Laboratory. “This helps us understand our environmental impact.”

I’m extremely excited to think of all the science and technological progress that will be coming as humans travel deeper into space.

Over the two weeks, she periodically collected samples from tabletops and floors to assess changes. “The most exciting part of my research was that I was able to process all the samples in real time because I was also field testing an instrument for automated DNA extraction developed for the International Space Station,” she says.

Ten days of heavy fog kept them from some outdoor activities, but they kept their spirits up in their tight quarters with books, long discussions and occasional movie nights.

“After lockdown, I was just so excited to feel the wind on my skin again,” she says. “And it was nothing compared to a real Mars trip.”

So is Blachowicz ready for liftoff? Not quite, she says with a laugh.

“I’m extremely excited to think of all the science and technological progress that will be coming as humans travel deeper into space,” she says, “but I’m more comfortable doing it as the support team back home.”

Life Beyond the Mars Colony

Blachowicz previously helped send fungi into space while a doctoral student at the USC School of Pharmacy. While working in the lab of Clay Wang, chair of the department of pharmacology and pharmaceutical sciences, she studied what compounds, called secondary metabolites, fungi would release in the extreme environment of the International Space Station (ISS). (On Earth, fungi subjected to stress can produce bioactive secondary metabolites used in pharmaceutical industry — most famously, penicillin).

Although the fungi didn’t return with new kinds of metabolites, one fungus revealed increased production of a promising compound, giving researchers clues to its metabolism, she says. Now at JPL, Blachowicz is studying a fungus isolated from the space station. “We know that human immune systems get weaker in space environments,” she says. “The fungus I study is known as an opportunistic pathogen, which means it can infect people with weakened immune systems. And in theory, this fungus can infect astronauts. So I’m studying the genetics, mechanism of virulence and adaptation of the fungus to the ISS environment.”

The microbiologist knows that wherever humans venture — from a remote dome in Hawaii to a planet light-years away — so do microscopic stowaways. Understanding how fungi and microbes adapt to space can protect both astronauts and new worlds.

“If we really do go to other celestial bodies,” she says, “we should know what we might unknowingly be bringing.”