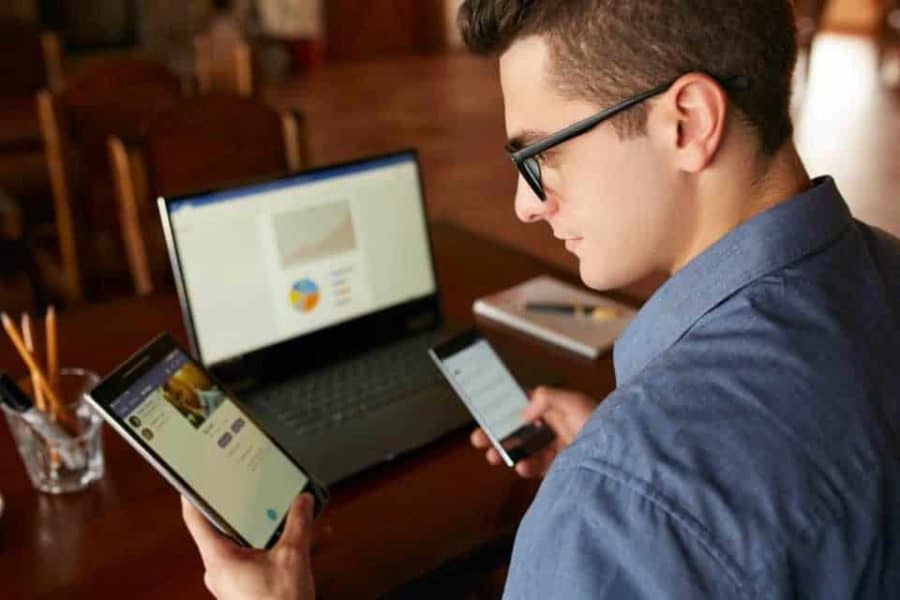 Attractive man in glasses working with multiple electronic devices. Freelancer businessman has laptop and smartphone in hands and laptop on table with charts on screen. Multitasking theme.

The eyes may be the windows to the soul, but they can also provide insightful glimpses into memory. Stanford scientists are now able to predict whether an individual will remember or forget based on their neural activity and pupil size.

“As we navigate our lives, we have these periods in which we’re frustrated because we’re not able to bring knowledge to mind, expressing what we know,” said Anthony Wagner, the Lucie Stern Professor in the Social Sciences in Stanford’s School of Humanities and Sciences. “Fortunately, science now has tools that allow us to explain why an individual, from moment to moment, might fail to remember something stored in their memory.”

In addition to investigating why people sometimes remember and other times forget, the team of scientists also wanted to understand why some of us seem to have better memory recall than others, and how media multitasking might be a factor.

The research, published in this week’s issue of the journal Nature, begins to answer these fundamental questions, which may have implications for memory conditions like Alzheimer’s disease and could lead to applications for improving peoples’ attention – and thereby memory – in daily life.

To monitor attention lapses in relation to memory, 80 study subjects between the ages of 18 to 26 had their pupils measured and their brain activity monitored via an electroencephalogram (EEG) – specifically, the brain waves referred to as posterior alpha power – while performing tasks like recalling or identifying changes to previously studied items.

“Increases in alpha power in the back of your skull have been related to attention lapses, mind wandering, distractibility and so forth,” said study lead author Kevin Madore, a Stanford postdoctoral fellow in the Stanford Memory Lab. “We also know that constrictions in pupil diameter – in particular before you do different tasks – are related to failures of performance like slower reaction times and more mind wandering.”

Differences in people’s ability to sustain attention were also measured by studying how well subjects were able to identify a gradual change in an image, while media multitasking was assessed by having individuals report how well they could engage with multiple media sources, like texting and watching television, within a given hour. The scientists then compared memory performance between individuals and found that those with lower sustained attention ability and heavier media multitaskers both performed worse on memory tasks.

Wagner and Madore emphasize that their work demonstrates a correlation, not causation. “We can’t say that heavier media multitasking causes difficulties with sustained attention and memory failures,” said Madore, “though we are increasingly learning more about the directions of the interactions.”

According to Wagner, one direction that the field as a whole has been heading in is a focus on what happens before learning or, as in this case, before remembering even occurs. That’s because memory heavily depends on goal-directed cognition – we essentially need to be ready to remember, have attention engaged and a memory goal in mind – in order to retrieve our memories.

“While it’s logical that attention is important for learning and for remembering, an important point here is that the things that happen even before you begin remembering are going to affect whether or not you can actually reactivate a memory that is relevant to your current goal,” said Wagner.

Some of the factors that influence memory preparedness are already within our control, he added, and can therefore be harnessed to assist recall. For example, conscious awareness of attentiveness, readiness to remember and limiting potential distractions allow individuals to influence their mindsets and alter their surroundings to improve their memory performance.

While these relatively straightforward strategies can be applied now, the researchers note that there may eventually be targeted attention-training exercises or interventions that people can employ to help them stay engaged. These are referred to as “closed-loop interventions” and are an active area of research.

As an example, Wagner and Madore envision wearable eye sensors that detect lapses in attention in real-time based on pupil size. If the individual wearer can then be cued to reorient their attention to the task at hand, the sensors may assist learning or information recall.

Finally, advances in measuring attentional states and their impacts on the use of goals to guide remembering also hold promise for a better understanding of disease or health conditions that affect memory. “We have an opportunity now,” Wagner said, “to explore and understand how interactions between the brain’s networks that support attention, the use of goals and memory relate to individual differences in memory in older adults both independent of, and in relation to, Alzheimer’s disease.”