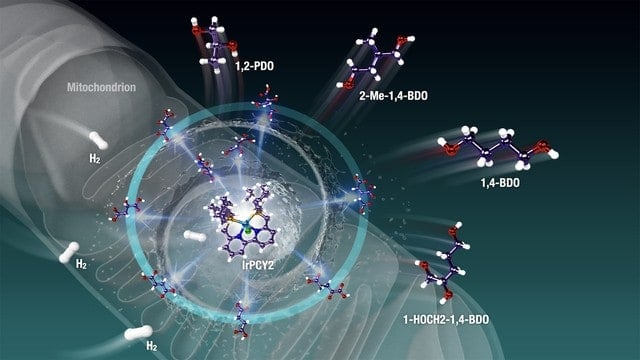 The imminent environmental crisis calls for an urgent transition to a green economy. A team of scientists at Nagoya University, Japan, led by Professor Susumu Saito, has recently found an interesting way to make this happen — by leveraging an important metabolic pathway in living cells. Their aim was to turn the energy-poor pathway products into biorenewable ones that can potentially power our world in a sustainable manner.

In most plants, animals, fungi, and bacteria, a pathway called the “Krebs cycle” is responsible for providing fuel for cells to carry out their functions. Operating in the mitochondria, this cycle ultimately results in the formation of both energy-rich compounds like NADH and FADH2 (which are used to power the organism) and energy-deficient metabolites like C4-, C5-, and C6-polycarboxylic acids (PCAs). Recently, the idea of modifying highly functionalized PCAs into biorenewable molecules has been explored, by restoring the carbon-hydrogen (C-H) bonds that were lost in their creation. This would need these biomolecules to undergo reactions called “dehydration” and “reduction,” that is, the reversal of the Krebs cycle — a complicated process.

In their new study, which was published in Science Advances, Prof Saito and his team rose to the challenge by aiming to find an artificial “catalyst,” a molecule that could facilitate this modification. They focused on a powerful, versatile precatalyst called “phosphine-bipyridine-phosphine (PNNP)iridium (Ir)-bipyridyl complex.” Prof Saito says, “Single-active-metal catalyst such as the (PNNP)Ir catalyst can facilitate the selective hydrogenation and dehydration of highly functionalized (highly oxidized and oxygenated) biomass feedstock like Krebs cycle metabolites.”

When the scientists tested the use of this precatalyst on C4-, C5-, and C6-polycarboxylic acids and other mitochondria-relevant metabolites, they found that the C-H bonds were incorporated effectively into the metabolites via hydrogenation and dehydration reactions — a feat otherwise very difficult to achieve. The restoration of C-H bonds means energy-rich organic compounds can be generated from energy-poor materials that are abundant in nature. Moreover, the reactions resulted in compounds called “diols” and “triols,” which are useful as moisturizing agents and in building plastics and other polymers. The sole “waste” product in this reaction is water, giving us a clean source of energy. Not just this, these complex processes could occur in a “one-pot fashion,” making this process efficient.

Prof Saito and his team are optimistic that their research will have important consequences for a future centered on renewable energy. Prof Saito says, “Wasteful carbon feedstocks like sawdust and rotten food contain a vault of different carboxylic acids and their potential derivatives. The molecular (PNNP)Ir catalyst can be used to make zero-emission materials. Many commodity plastics and polymer materials could be produced from biomass-based wasteful feedstock using the diols and triols obtained from the hydrogenation process.”

With these findings, a greener, more carbon-neutral society is surely in sight.

The paper, “Reaction of H2 with mitochondria-relevant metabolites using a multifunctional molecular catalyst,” was published in the journal Science Advances on October 23, 2020, at DOI: 10.1126/sciadv.abc0274.