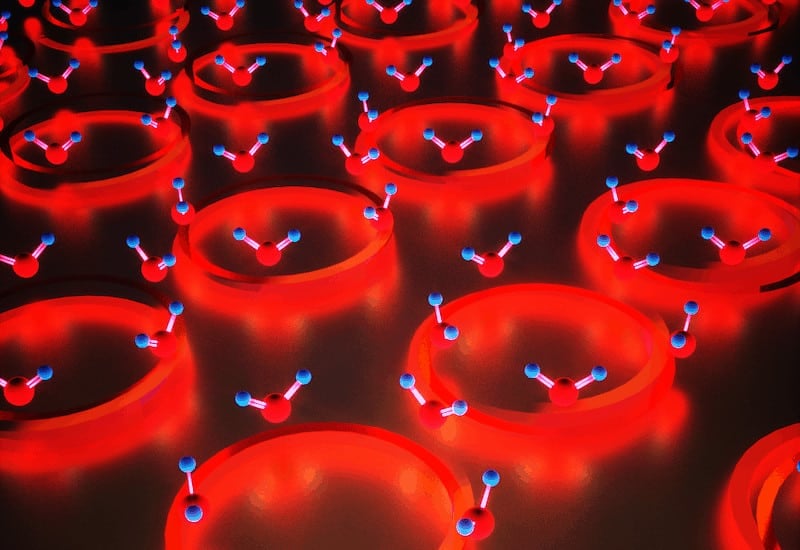 In groundbreaking new research, an international team that includes a Vanderbilt engineer has developed a unique process for producing a quantum state that is part light and part matter.

The discovery provides fundamental new insights for more efficiently developing the next generation of quantum-based optical and electronic devices. The research could also have an impact on dictating the path for chemical reactions.

The research, led by the University of Minnesota, is published today in Nature Photonics, a high-impact, peer-reviewed scientific journal.

Quantum science studies natural phenomena of light and matter at the smallest scales. In this study, the researchers developed a unique process in which they achieved “ultrastrong coupling” between infrared light (photons) and matter (atomic vibrations) by trapping light in tiny, annular holes in a thin layer of gold.

“In typical infrared spectroscopy, the infrared photon is only weakly absorbed because the strength of the vibration is low in comparison to other light-matter interactions such as absorption in a direct band gap semiconductor”, said Joshua Caldwell, Vanderbilt Associate Professor of Mechanical Engineering and Flowers Family Chancellor’s Faculty Fellow.

The annular holes, or nanocavities, were as small as two nanometers, or approximately 25,000 times smaller than the width of a human hair and similar to a highly scaled-down version of coaxial cables used to send electrical signals. The nanocavities were filled with silicon dioxide, which is essentially the same as window glass. Unique fabrication methods make it possible to produce millions of these cavities simultaneously, with all of them simultaneously exhibiting ultrastrong photon-vibration coupling.

“Others have studied strong coupling of light and matter, but with this new process to engineer nanometer-sized version of coaxial cables, we are pushing the frontiers of ultrastrong coupling, which means we are discovering new quantum states where matter and light can have very different properties and unusual things start to happen,” said Sang-Hyun Oh, a University of Minnesota professor of electrical and computer engineering and the corresponding author of the study.

“This ultrastrong coupling of light and atomic vibrations opens up all kinds of possibilities for developing new quantum-based devices or modifying chemical reactions,” Oh said.

When an object is heated, the atoms that make up the object start vibrating faster, giving off more infrared radiation, enabling thermal-imaging or night-vision cameras. Conversely, chemists use absorption of infrared wavelengths as a “fingerprint” to identify different chemicals.

These and other applications can be improved by increasing how strongly infrared light interacts with atomic vibrations in materials. Using nanometer-scale metallic structures, or “nanocavities,” to confine the light on ultra-small length scales produces interactions that can be strong enough that the quantum-mechanical nature of the light and the vibrations comes into play. Under such conditions, the absorbed energy is transferred back and forth between the light in the nanocavities and the atomic vibrations in the material fast enough that the light photon and matter phonon can no longer be distinguished. These strongly coupled modes result in new quantum-mechanical objects, known as “polaritons” that are part light and part vibration at the same time.

The implications are profound. A specific chemical may typically react with another through the thermodynamically favorable pathway. “However, by strongly coupling a photonic cavity to the vibration of a competing bond in the initial molecule, the process could induce that bond to break first, giving it the preferential position to react and thus changing the resultant product chemical,” Caldwell said.

In other words, the same two reactants would produce different products.

The research was funded primarily by the U.S. National Science Foundation and the Samsung Global Research Outreach Program with additional support from the Spanish Ministry of Economy and Competitivity, Aragón Government Project, and U.S. Office of Naval Research.