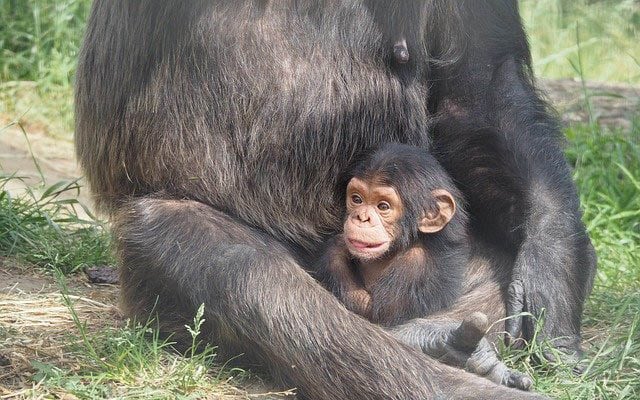 Compared to chimpanzees, our closest evolutionary cousins, humans are particularly prone to developing advanced carcinomas — the type of tumors that include prostate, breast, lung and colorectal cancers — even in the absence of known risk factors, such as genetic predisposition or tobacco use.

A recent study led by researchers at University of California San Diego School of Medicine and Moores Cancer Center helps explain why. The study, published December 9, 2020 in FASEB BioAdvances, suggests that an evolutionary genetic mutation unique to humans may be at least partly to blame.

“At some point during human evolution, the SIGLEC12 gene — and more specifically, the Siglec-12 protein it produces as part of the immune system — suffered a mutation that eliminated its ability to distinguish between ‘self’ and invading microbes, so the body needed to get rid of it,” said senior author Ajit Varki, MD, Distinguished Professor at UC San Diego School of Medicine and Moores Cancer Center. “But it’s not completely gone from the population — it appears that this dysfunctional form of the Siglec-12 protein went rogue and has now become a liability for the minority of people who still produce it.”

In a study of normal and cancerous tissue samples, the researchers discovered that the approximately 30 percent of people who still produce Siglec-12 proteins are at more than twice the risk of developing an advanced cancer during their lifetimes, compared to people who cannot produce Siglec-12.

Normally, genes that encode such dysfunctional proteins are eliminated by the body over time, and approximately two-thirds of the global human population has stopped producing the Siglec-12 protein. Where the gene still hangs around in humans, it was long thought be of no functional relevance, and there have been very few follow-up studies over the two decades since it was discovered. Meanwhile, chimpanzees still produce functioning Siglec-12.

When Nissi Varki’s team set out to detect the Siglec-12 in non-cancerous tissue samples using an antibody against the protein, approximately 30 percent of the samples were positive, as expected from the genetic information. In contrast, the majority of advanced cancer samples from the same populations were positive for the Siglec-12 protein.

Looking at a different population of patients with advanced stage colorectal cancer, the researchers found that more than 80 percent had the functional form of the SIGLEC-12 gene, and those patients had a worse outcome than the minority of patients without it.

“These results suggest that the minority of individuals who can still make the protein are at much greater risk of having an advanced cancer,” Nissi Varki said.

The researchers also validated their findings in mice by introducing tumor cells engineered to produce Siglec-12. The resulting cancers grew much faster, and turned on many biological pathways known to be involved in advanced cancers, compared to control tumor cells without functioning Siglec-12.

According to Ajit Varki, this information is important because it could be leveraged for future diagnostics and treatments. The team got a jump start by developing a simple urine test that could be used to detect the presence of the dysfunctional protein, and “we might also be able to use antibodies against Siglec-12 to selectively deliver chemotherapies to tumor cells that carry the dysfunctional protein, without harming non-cancerous cells,” he said.

Disclosure: Professor Ajit Varki is a scientific advisor to Mablytics Inc., a biotech startup which is developing immunotherapeutics directed against this novel Siglec target in solid tumors. Mablytics has also funded a related research collaboration with UC San Diego led by Nissi Varki.