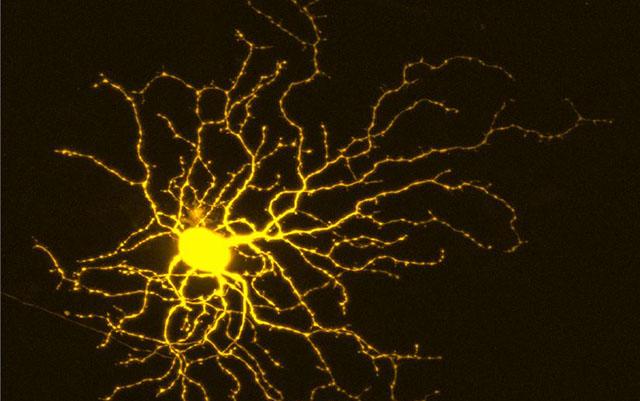 Many neurodegenerative conditions, from glaucoma to Alzheimer’s disease, are characterized by injury to axons — the long, slender projections that conduct electrical impulses from one nerve cell to another, facilitating cellular communications. Injury to axons often leads to neuronal impairment and cell death.

Researchers know that inhibiting an enzyme called dual leucine zipper kinase (DLK) appears to robustly protect neurons in a wide range of neurodegenerative diseases models, but DLK also inhibits axonal regeneration. Until now, there have been no effective methods to modify genes to improve both the long-term survival of neurons and promote regeneration.

In a paper published December 14, 2020 in PNAS, a multi-university team led by researchers at University of California San Diego School of Medicine and Shiley Eye Institute at UC San Diego Health identified another family of enzymes called germinal cell kinase four kinases (GCK-IV kinases) whose inhibition is robustly neuroprotective, while also permitting axon regeneration, making it an attractive therapeutic approach for treating at some neurodegenerative diseases.

“We basically figured out that there are a set of genes that, when inhibited, allow optic nerve cells to survive and regenerate,” said senior author Derek Welsbie, MD, PhD, associate professor of ophthalmology in the Viterbi Family Department of Ophthalmology at Shiley Eye Institute.

“Prior to this work, the field knew how to get these cells to survive, but not regenerate. Conversely, there are ways to promote regeneration, but then the survival was rather modest. Of course, for a successful strategy of vision restoration, you need both and this is a step in that direction.”

The researchers conducted a series of screens after first creating retinal ganglion cells (RGC) from human stem cells. RGCs are a type of neuron located near the inner surface of the retina of the eye. They receive visual information from photoreceptors and collectively help transmit that information to the brain.

The first screen involved testing a group of well-studied chemicals to assess their ability to increase the survival of RGCs; the second to measure the ability of chemicals to promote regeneration.

“We then used a machine-learning technique to understand why certain compounds were active while others were not and it identified these key genes,” said Welsbie.

The discovery that these genes improved RGC survival was not surprising, he said. “However, you would have predicted that they (like DLK) would have blocked regeneration when inhibited, not promote regeneration. That was definitely a surprise. It highlights one of the advantages of discovery-based science using high-throughput screening: By testing many agents at once, we can find identify overlooked genes that might not have been thought to play a role.”

Welsbie and colleagues focused their work on RGCs because they are interested in optic neuropathies, such as glaucoma. “Most people think only about glaucoma in terms of ‘eye pressure,'” Welsbie said. But eye pressure is only part of the problem. At its core, glaucoma is a neurodegenerative disease characterized by progressive loss of RGCs and their axons, leading to measurable structural and functional damage to the optic nerve, visual impairment and blindness.

The U.S. Centers for Disease Control and Prevention estimate 3 million Americans have glaucoma. It is the second leading cause of blindness worldwide.

Welsbie cautioned that it’s not yet known whether these findings extend to other neuron types, but he noted that the work suggests strong therapeutic possibilities.