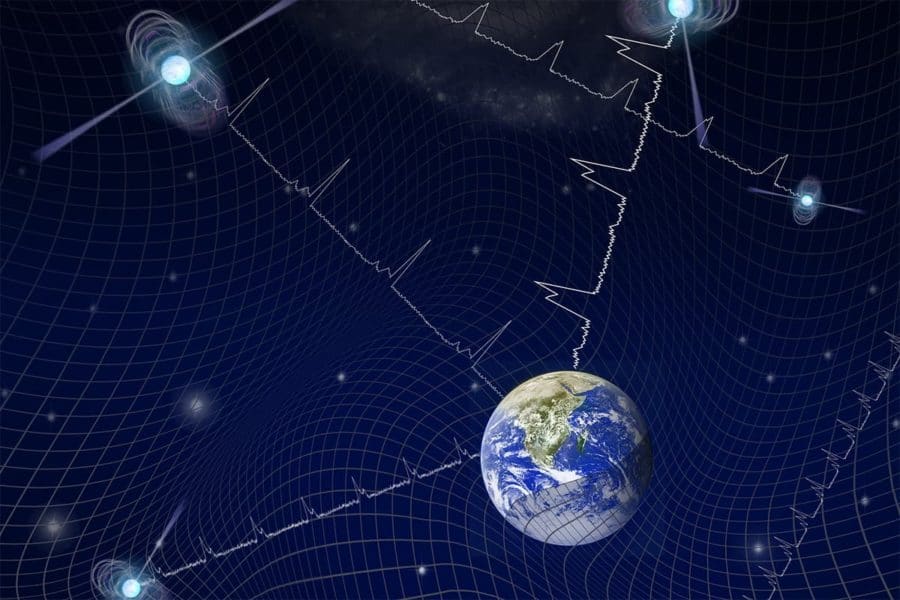 Data from Arecibo Observatory in Puerto Rico has been used to help detect the first possible hints of low-frequency disturbances in the curvature of space-time.

The results were presented today at the 237th meeting of the American Astronomical Society, which was held virtually, and are published in The Astrophysical Journal Letters. Arecibo Observatory is managed by the University of Central Florida for the National Science Foundation under a cooperative agreement.

The disturbances are known as gravitational waves, which ripple through space as a result of the movement of incredibly massive objects, such as black holes orbiting one another or the collision of neutron stars.

It’s important to understand these waves as they provide insight into the history of the cosmos and expand researchers’ knowledge of gravity past current limits of understanding.

Although the gravitational waves are stretching and squeezing the fabric of space-time, they don’t impact humans and any changes in the relative distances between objects would change the height of a person by less than one one-hundredth the width of a human hair, says Joseph Simon, a postdoctoral associate in the Center for Astrophysics and Space Astronomy at the University of Colorado Boulder.

Simon presented the findings at the society today, is lead researcher of the paper, and is a member of the North American Nanohertz Observatory for Gravitational Waves, or NANOGrav, the team that performed the research.

NANOGrav is a group of more than 100 astronomers from across the U.S. and Canada whose common goal is to study the universe using low-frequency gravitational waves

The new findings made by NANOGrav researchers are unique because the astronomers found possible hints of low-frequency gravitational waves by using radio telescopes, since they cannot be detected by LIGO. Both frequencies are important for understanding the universe.

Key to the research were two NSF-funded instruments – Green Bank Telescope in West Virginia and Arecibo Observatory in Puerto Rico.

Arecibo Observatory, with its 1,000 foot diameter dish provided very precise data, while the Green Bank Telescope, which has much larger sky coverage, sampled a wider range of information needed to discriminate gravitational wave perturbations from other effects, Simon says.

“We time roughly half the pulsars with each telescope,” he says. “Each telescope provides about half of our total sensitivity in a complementary way.”

Although the researchers used Arecibo data for the study, they are no longer able to make observations with it since the observatory collapsed in December following broken cables in August and November.

“It was a truly horrible day when the telescope collapsed,” Simon says. “It feels like the loss of a good friend, and we are so saddened for our friends and colleagues in Puerto Rico. Going forward, we hope to increase the amount of time we use on the Green Bank Telescope to at least partially compensate for Arecibo’s loss. Another large collecting area radio telescope must be built in the U.S. soon if we want this research area to flourish.”

The researchers were able to detect possible hints of low-frequency gravitational waves by using the telescopes to study signals from pulsars, which are small, dense, rotating stars that send out pulses of radio waves at precise intervals toward Earth. This regularity make them useful in astronomical study, and they are often referred to as the universe’s timekeepers.

Gravitational waves can interrupt their regularity, causing deviations in pulsar signals arriving on Earth, thus indicating the position of the Earth has shifted slightly.

By studying the timing of the regular signals from many pulsars scattered over the sky at the same time, known as a “pulsar timing array,” NANOGrav was able to detect minute changes in the Earth’s position possibly due to gravitational waves stretching and shrinking space-time.

NANOGrav was able to rule out some effects other than gravitational waves, such as interference from the matter in the solar system or certain errors in the data collection.

To confirm direct detection of a signature from low-frequency gravitational waves, NANOGrav researchers will have to find a distinctive pattern in the signals between individual pulsars. At this point, the signal is too weak for such a pattern to be distinguishable, according to the researchers.

Boosting the signal requires NANOGrav to expand its dataset to include more pulsars studied for even longer lengths of time, which will increase the array’s sensitivity. In addition, pooling NANOGrav’s data together with those from other pulsar timing array experiments, a joint effort by the International Pulsar Timing Array, may reveal such a pattern. The International Pulsar Timing Array is a collaboration of researchers using the world’s largest radio telescopes.

At the same time, NANOGrav is developing techniques to ensure the detected signal could not be from another source. They are producing computer simulations that help test whether the detected noise could be caused by effects other than gravitational waves, in order to avoid a false detection.

“It is incredibly exciting to see such a strong signal emerge from the data,” Simon says. “However, because the gravitational-wave signal we are searching for spans the entire duration of our observations, we need to carefully understand our noise. This leaves us in a very interesting place, where we can strongly rule out some known noise sources, but we cannot yet say whether the signal is indeed from gravitational waves. For that, we will need more data.”

“A low-frequency gravitational wave detection would enhance our understanding of supermassive black hole binaries, galaxy evolution, and the universe,” says Perera, who is also a member of NANOGrav.

He says that despite the collapse of Arecibo Observatory, there are still much archived data to pore through to continue to learn about gravitational waves.

“Arecibo was very important as its timing data provided about 50 percent of NANOGrav’s sensitivity to gravitational waves,” he says. “I want to ensure that the sensitive data we collected before Arecibo’s collapse has the highest possible scientific impact.”