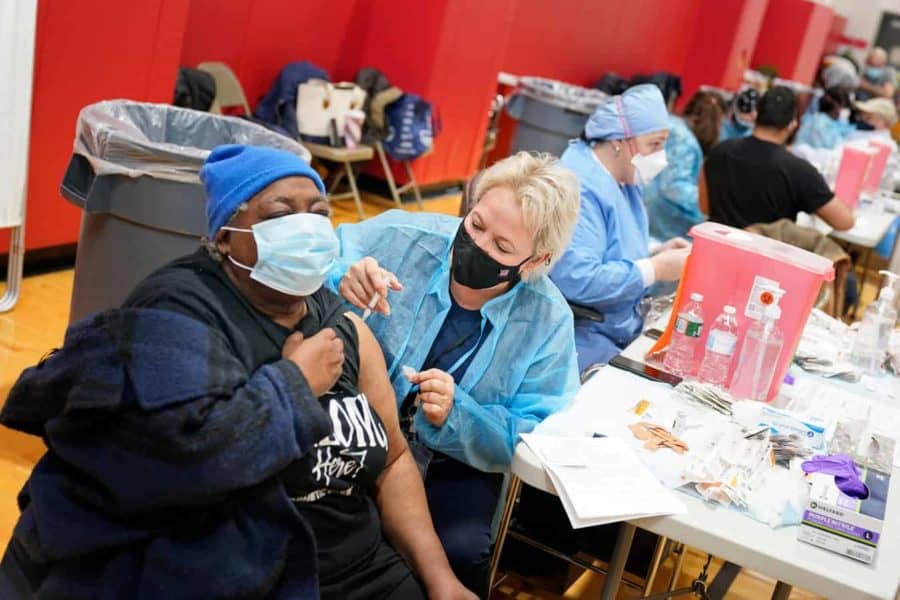 Mary Jenkins, left, received the COVID-19 vaccine in Paterson, N.J., Thursday, Jan. 21, 2021. The first people arrived around 2:30 a.m. for the chance to be vaccinated at one of the few sites that does not require an appointment. Smaller-than-expected vaccine deliveries from the federal government have caused frustration and confusion and limited states' ability to attack the outbreak that has killed over 400,000 Americans. (AP Photo/Seth Wenig)

While public health and infectious disease experts are keeping a wary eye on emerging coronavirus variants, particularly one in South Africa that shows some signs of evading immune responses, a Harvard public health expert predicted that, ultimately, technology and science would prevail.

“I don’t think the virus is going to win this war,” said Barry Bloom, the Joan L. and Julius H. Jacobson Research Professor of Public Health and former dean at the Harvard T.H. Chan School of Public Health. Bloom, speaking at a Facebook Live event “The COVID-19 Vaccine Rollout: What’s Ahead?” on Friday, said viruses routinely mutate but only occasionally acquire new traits, like the more infectious British variant now spreading in 60 countries, including the U.S. If needed, however, the same technology that produced two effective coronavirus vaccines in record time could be used to produce a new one to fight “a total escape variant,” a mutated virus unaffected by present vaccines.

“The hopeful aspect is the speed and the technology used in these vaccines means that if it’s necessary to [use] a second spike protein that would enable the vaccine to be good for these strains, that’s about a six-week job for these companies, maybe eight weeks,” Bloom said. “Since 1796, when the first vaccine against smallpox was discovered by Edward Jenner, vaccines [have been] an iterative process. It’s very rare that the first vaccine works over the long haul.”

Other panelists who took part in the discussion presented, by The Forum at Harvard T.H. Chan School of Public Health and National Public Radio, detailed additional challenges in the rollout, including short supplies, vaccine hesitancy, and a lack of coordination from federal officials, a problem the new Biden administration has pledged to resolve.

“I don’t think the virus is going to win this war.”
— Barry Bloom, professor of public health

Sandra Nelson, an associate physician at Massachusetts General Hospital’s (MGH) Division of Infectious Diseases and assistant professor at Harvard Medical School, said she’s seen the problems and promise of national distribution in miniature at MGH, which has vaccinated 19,000 frontline workers, including doctors, nurses, food service employees, and cleaning staff. Of them, she said, 3,000 have also received the second dose, which is given weeks later.

Nelson said she was struck by the strong emotions the vaccinations have elicited, a likely outgrowth of the unrelenting pressure felt by those workers since the pandemic’s start. She said she’s seen anger from some who had expected to be vaccinated only to be told supplies had run out and elation by many once they’d gotten the shots. In fact, Nelson said, the moment of inoculation has spawned a new social media phenomenon  — the vaccination selfie — which when it involves health care workers, can be a weapon in the fight against vaccine hesitancy, as polls show Americans have a high level of trust in them.

Nelson said that despite guidelines on whom to prioritize for vaccination, the everyday job of executing those guidelines won’t be simple, since it entails differentiating between the conditions of millions of patients to determine those at highest risk and determining who should be first, second, and third. It’s also clear, she said, that racial and ethnic minority groups are overrepresented in MGH’s wards, a sign that efforts to reach those communities will be important.

Nancy Messonnier, director of the National Center for Immunization and Respiratory Diseases at the U.S. Centers for Disease Control and Prevention (CDC), said 2 million Americans have completed the two-dose regimen and 750,000 doses were administered daily over the last week. While the Biden administration has pledged to increase the pace of vaccination to distribute 100 million doses over its first 100 days, right now, Messonnier said, there are too few doses, not enough places to distribute them, not enough workers to do the vaccination, and not enough education to fight public hesitancy.

It’s also important, she said, that increasing the speed of vaccination not mean that distribution becomes inequitable. It should reach across the country to every community and reach populations in need. That also means, she said, that there has to be access to accurate vaccine information so people are more willing to get the shots, and it should be easier for people interested in getting vaccinated to find out how to get it.

Panelists said that even as more people get vaccinated, continued vigilance will be important. How long vaccine-derived immunity will last remains a question mark but should become apparent in the months ahead. Another question is whether the vaccine reduces transmission as well as preventing contraction of serious illness. Marc Lipsitch, director of the Harvard Chan School’s Center for Communicable Disease Dynamics, said some data from the Moderna vaccine trial showed that levels of virus in the nose were lower in those arriving to get their second dose, which likely translates to lower transmissibility. Those results are preliminary and need to be confirmed, but Lipsitch said that if the vaccines are shown to reduce transmission but not eliminate it, the need to use masks and distancing measures may remain for some time.