After the Fukushima nuclear power plant disaster in March 2011, the Japanese authorities decided to clean up the region impacted by the radioactive plume. Olivier Evrard, a researcher in environmental science, visited the area regularly to conduct measurements. He explains what the decontamination effort involved, as well as the issues it raised.

The accident at the Fukushima nuclear power plant led to a major fallout of radioactive matter over 9,000 km2, the size of Corsica. Following the disaster, the Japanese authorities initiated an intense decontamination effort in the surrounding zone, so as to allow inhabitants to return in complete safety. What was their strategy?
Olivier Evrard:1 The strategy consisted in removing five centimetres of topsoil in all cultivated fields and residential areas. Studies had shown that the radionuclide posing the greatest risk to the population – caesium 137, an isotope of caesium – which was emitted in substantial quantities during the accident, was largely trapped in the clay found in the first few centimetres of topsoil. It was also estimated that, in the absence of decontamination, it would remain in the environment for two centuries. Stripping away the surface would however help to eliminate most of it. 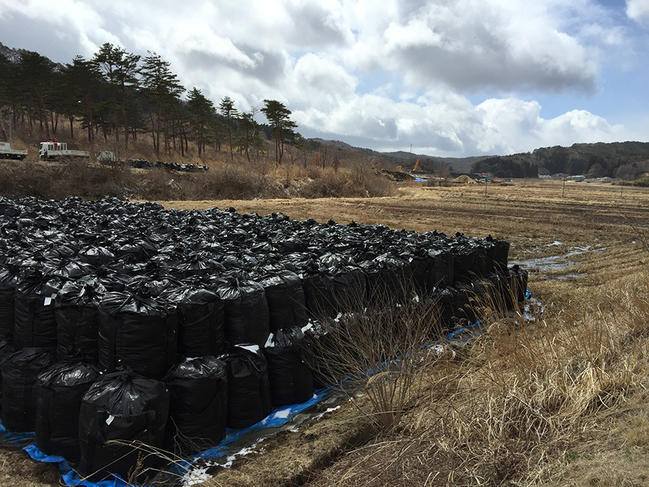 In the village of Iitate, in the Fukushima Prefecture, the topsoil of agricultural land contaminated by radiocaesium was removed and placed in bags, before being evacuated towards temporary storage sites (2014).
Olivier EVRARD
While the idea was relatively straightforward in the beginning, the clean-up project, which began in 2013 and was completed in 2019, proved a colossal undertaking. It cost €24 billion, involved 16,000 people, and generated 20 million cubic metres of waste, enough to fill 8,000 Olympic-sized swimming pools, and will be stored for several decades near the nuclear power plant before being sent to permanent storage sites outside of Fukushima Prefecture around 2050.

These decontamination efforts were a first after a nuclear accident. Were they effective?
O. E.: Yes. In a study published in 20192 in collaboration with Canadian and Japanese colleagues, which provided a synthesis of some sixty scientific articles on the subject, we showed that soil removal reduced concentrations of caesium by 80%, thereby bringing the residual radioactivity in the decontaminated areas down to the average levels of natural radioactivity found in Japan. This conclusion was based on yearly soil samples collected by researchers, including my team. 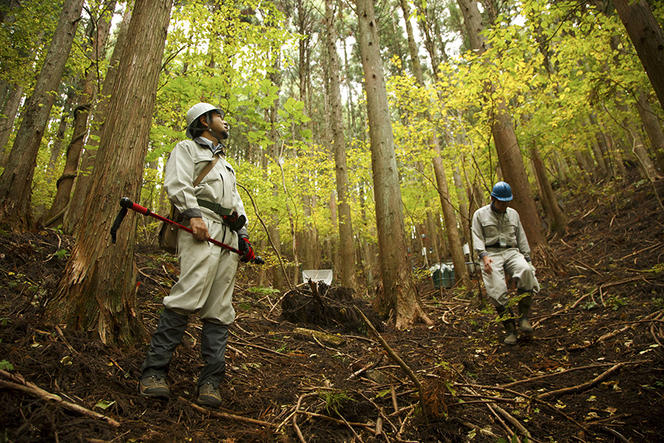 Geologists from the Japan Atomic Energy Agency inspecting a station dedicated to monitoring the effects of caesium (November 2014). According to Olivier Evrard, the woodland was not decontaminated for reasons of cost and technical difficulty.
Benoit DECOUT/REA
Does this mean that there is no risk for the inhabitants, who are starting to return home?

O. E.: It is difficult to say because there are still many unknowns, beginning with the situation in forests. Unlike the agricultural and residential plains, these wooded and mountainous zones were not decontaminated, for reasons of cost and technical difficulty. Yet they make up three quarters of the surface impacted by the radioactive plume. As a result, they represent a potential long-term reservoir of caesium, which could be redistributed by waterways towards the low-lying inhabited land through soil erosion, mudslides, and the flooding that occurs during the frequent typhoons that strike the region. Hence the importance of regularly monitoring radioactivity levels in sediments from coastal rivers and lakes, as we have been doing since 2011 in order to detect any potential recontamination of cleaned areas, or of those spared by the plume.
Another question involves the decision made last August by the Japanese authorities not to include the immediate surroundings of the power plant, which were initially slated for decontamination. This will also require monitoring radioactivity levels and transfer.

What other questions remain unresolved?
O. E.: First there is the problem of waste treatment. Storing contaminated soil is not a solution in itself; the caesium must be extracted and recycled in order to recover the depolluted portion. A number of processes have been tested on small quantities of soil, but none are applicable on a large scale at this stage.

Then there is the question of replanting agricultural plots. In decontaminated zones, the missing ground was replaced by locally available crushed granite, which was then mixed with the subsoil. Is this “new” earth equally fertile? What should farmers grow to limit the transfer of residual caesium in plants, or its diffusion in the environment through erosion and rain? This final point is all the more important as agricultural activity could also resume on the land near the power plant, which was not decontaminated. 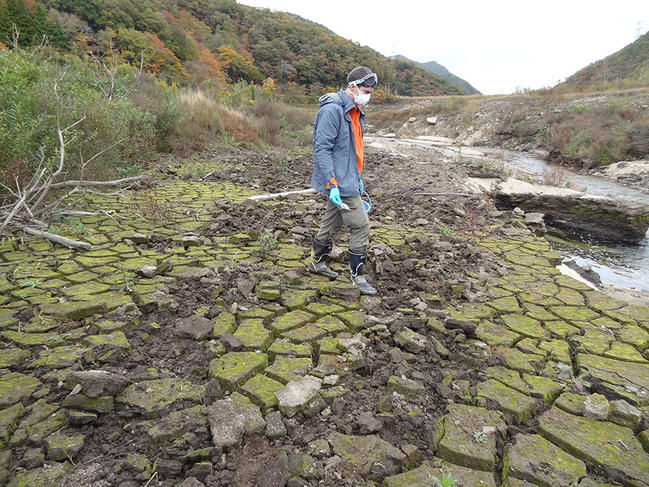 Collecting sediment from the rivers of the Fukushima region in 2012, after floods caused by typhoons. Caesium can indeed be redistributed by waterways to inhabited areas following such floods.
LSCE

What advice should be given to the farmers who want to resume their activity in Fukushima?
O. E.: One avenue that has drawn great interest recently is using the land for non-food crops intended for the production of biofuels and biomaterials. Indeed, people are still apprehensive about consuming food grown in Fukushima, despite scientific studies showing that rice, which is produced abundantly in this region, ultimately absorbs very little caesium from corrupted soil. Non-food crops with very low intake of this element could therefore be reassuring, and would avoid generating more contaminated waste.  After the accident, some envisaged resorting to phytoremediation, a decontamination solution using plants that, on the contrary, soak up large quantities of caesium. This approach has since shown its limitations, with too many crop cycles to be effective, and too much polluted biomass to manage. 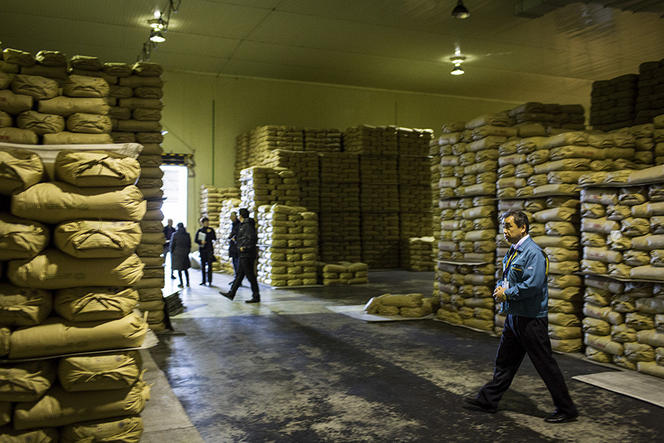 Stocks of rice whose radioactivity levels were found to comply with regulations (Fukushima, November 2015). Scientific studies have also shown that rice absorbs very little caesium from contaminated soil.
Matthieu ZELLWEGER/HAYTHAM-REA
In any case, the resumption of agricultural activity must be closely monitored by researchers, in order to determine how much it contributes to the dissemination of caesium by stripping the soil bare for a part of the year, and thereby exposing it to erosion. For that matter, we plan to make such measurements on test plots located outside the plume, as well as in both the decontaminated and non-decontaminated areas.3

Will the lessons from the Fukushima decontamination be useful in the event of other nuclear accidents?
O. E.: Yes of course, it is the first time that such a clean-up effort was made following a nuclear accident. It has provided invaluable information on the effectiveness of this type of strategy. This feedback will be most useful to more effectively deal with the consequences of potential nuclear and industrial disasters in general, such as the Lubrizol factory fire in Rouen (northwestern France) in 2019, which raised the same contamination redistribution issue. The field measurements conducted in Fukushima will help us calibrate our models4 for the transfer of pollutants in the environment. In the future, these will help political authorities make informed decisions. Depending on the population density and levels of radioactivity in the affected areas, the types of activity conducted there, etc., it will be possible to decide between a Chernobyl scenario, in which the zone concerned is closed and left to nature, or a Fukushima situation, with direct intervention to “reconquer” the territory. 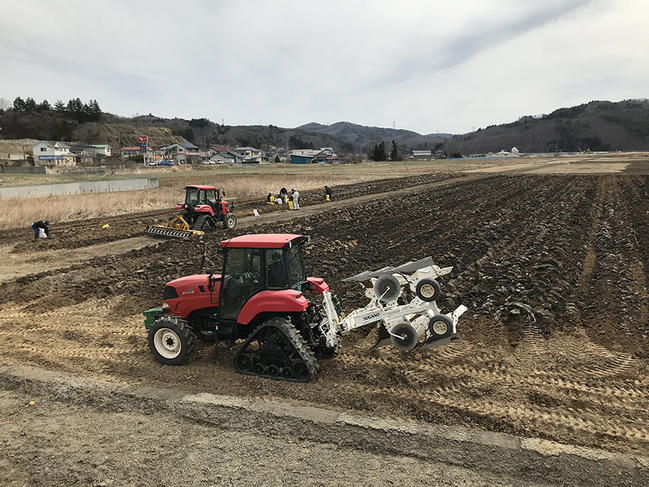 Preparing agricultural land for recultivation in the village of Iitate, near Fukushima (2019). The residual soil and the crushed granite layer, which was added to replace the contaminated topsoil removed, are mixed and blended.
Olivier EVRARD

Our models will help guide choices in a more refined and nuanced way, especially in matters of agriculture; if for example the authorities decide to resume this activity after an accident, our standards will identify the types of crop that should be favoured on contaminated and decontaminated plots in order to avoid further release of pollutants into the environment as much as possible.

Should the population be involved in these decisions?
O. E.: That is essential for the project’s success. It is the case at Fukushima, where the benefits of the decontamination effort are relatively low given the cost, as population return rates do not exceed 30% in the majority of the municipalities evacuated after the accident. Finding the right solutions will require continued assessment of contamination levels in repopulated areas, as well as a better understanding of what activities people engage in and why. Hence our decision in 2020 to launch, with the CNRS sociologist Cécile Asanuma-Brice, the five-year Mitate Lab international research programme,5 which will examine the reopening of the evacuated area in all of its aspects – whether physical, chemical, biological, or human – to make sure we have a full grasp of the issues at hand.