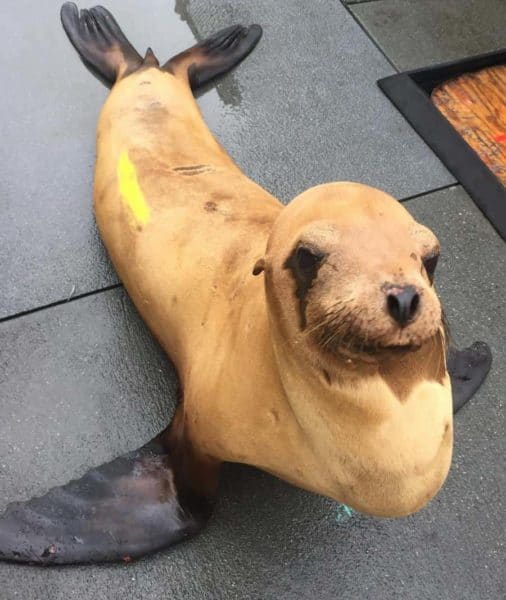 After more than three decades of research, scientists have proven that the cancer affecting up to one in four adult California sea lions necrospied at The Marine Mammal Center in Sausalito, CA, is caused by a sexually transmitted herpesvirus. The cancer, known as sea lion urogenital carcinoma, has clear parallels to cervical cancer in humans and provides a helpful model for human cancer study.

Scientists have long suspected this cancer was associated with a virus, but this is the first study to prove this theory. The study, which was published in Animals, an open-access, peer-reviewed journal, concluded that genital herpesvirus is a driving factor in the development of sea lion urogenital carcinoma. The research also suggests there is an underlying trigger or event that causes the virus to induce cancer in some infected sea lions and not others. Wild California sea lions have among the highest prevalence of a single type of cancer in any mammal, including humans.

A second recently published paper (Sea lions are dying from a mysterious cancer. – Los Angeles Times, latimes.com) led by the same team showed that pollutants such as PCBs and DDT play a significant role as co-factors in the development of this cancer. This is particularly relevant to Southern California where there is a large DDT dumpsite in the Southern California bight which is also where the majority of the sea lion population gather each year to give birth and raise their pups (How the waters off Catalina became a DDT dumping ground – Los Angeles Times, latimes.com).

“The confirmation that this is a virally induced cancer combined with the knowledge that contaminants play a significant role in the cancer’s development means that we can use these sea lions as a naturally occurring disease model to better understand how cancer develops and spreads in all species, including humans,” says Dr. Alissa Deming, the lead author of the study who completed this work during her Ph.D. studies at University of Florida in Gainesville, FL., while she was a Research Fellow at The Marine Mammal Center in Sausalito, CA. (Dr. Deming is now Director of Clinical Medicine at the Pacific Marine Mammal Center in Laguna Beach, CA.)

The Marine Mammal Center is the world’s largest marine mammal hospital and has been on the forefront of researching and understanding cancer in California sea lions and its connection to both ocean and human health. Since cancer in sea lions was first discovered in 1979, researchers have found that between 18-23 percent of adult sea lions admitted to the Center’s hospital have died of the fatal disease. In 2010, the Center brought together an array of international researchers to form the Sea Lion Cancer Consortium to further investigate this disease, many of whom helped co-author the paper.

“This research is critical as these sea lions may hold the key to understanding virally induced cancers as well as how cancer metastasizes, or spreads through the body,” says Dr. Pádraig Duignan, Director of Pathology at The Marine Mammal Center and a co-author on the study. “This knowledge is an important link that could help scientists better understand various cancers in people.” Most cancers are caused by an accumulation of several factors, making it challenging to study cancer in traditional laboratory models. However, wild sea lions experience multiple layers of stressors including infectious agents, exposure to pollutants, nutrition, and environmental influences, all of which are much more representative of how cancer develops in the “real world.”

According to Duignan, “the cancer begins in the sea lion’s genital tract and aggressively spreads throughout the sea lion’s body, resulting in death, often from kidney failure.” Because of the advanced state of cancer by the time these patients strand on beaches and are rescued by rehabilitation centers, euthanasia is the only humane option. “This cancer is devastating to see in California sea lions. They come to the hospital in end-stage disease,” says Dr. Deming.

The paper was the result of an international, cross-discipline effort, combining multiple techniques from a variety of specialists to unlock the mysteries of this disease. The research relied on novel techniques using RNAscope® Technology and Base Scope™, tools that allow researchers to pinpoint high viral gene expression within tumor tissue but not in surrounding healthy tissue.

“Our study was the first time that this revolutionary technique has been used on a marine mammal species,” says Dr. Kathleen Colegrove, Clinical Professor of the Zoological Pathology Program at the University of Illinois Urbana-Champaign, and a key researcher on the study. “This proved that the virus was integral to cancer development and was not just being detected in the reproductive tracts or tissue as a bystander.”