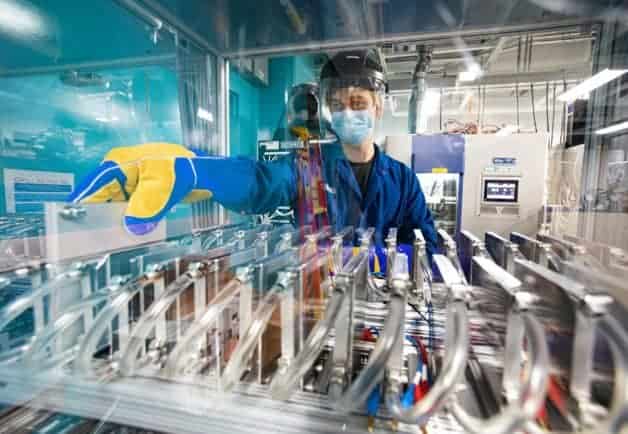 An X-ray instrument at Berkeley Lab contributed to a battery study that used an innovative approach to machine learning to speed up the learning curve about a process that shortens the life of fast-charging lithium batteries.

Researchers also employed “in situ” X-ray diffraction at another synchrotron – SLAC’s Stanford Synchrotron Radiation Lightsource – which attempted to recreate the conditions present in a battery, and additionally provided a many-particle battery model. All three forms of data were combined in a format to help the machine-learning algorithms learn the physics at work in the battery.

While typical machine-learning algorithms seek out images that either do or don’t match a training set of images, in this study the researchers applied a deeper set of data from experiments and other sources to enable more refined results. It represents the first time this brand of “scientific machine learning” was applied to battery cycling, researchers noted. The study was published recently in Nature Materials.

The study benefited from an ability at the COSMIC beamline to single out the chemical states of about 100 individual particles, which was enabled by COSMIC’s high-speed, high-resolution imaging capabilities. Young-Sang Yu, a research scientist at the ALS who participated in the study, noted that each selected particle was imaged at about 50 different energy steps during the cycling process, for a total of 5,000 images.

The data from ALS experiments and other experiments were combined with data from fast-charging mathematical models, and with information about the chemistry and physics of fast charging, and then incorporated into the machine-learning algorithms.

“Rather than having the computer directly figure out the model by simply feeding it data, as we did in the two previous studies, we taught the computer how to choose or learn the right equations, and thus the right physics,” said Stanford postdoctoral researcher Stephen Dongmin Kang, a study co-author.

Patrick Herring, senior research scientist for Toyota Research Institute, which supported the work through its Accelerated Materials Design and Discovery program, said, “By understanding the fundamental reactions that occur within the battery, we can extend its life, enable faster charging, and ultimately design better battery materials.”