Four slime moulds, strange single-celled organisms without brains, will accompany French astronaut Thomas Pesquet when he blasts off for the International Space Station on 22 April. On board, Pesquet will use them for various experiments, which will also be carried out back on Earth by thousands of French school students, with the assistance of France’s space agency CNES and the CNRS.

“How about adopting a slime mould?” No doubt the message posted on the social networks by Thomas Pesquet, who is preparing to set off on 22 April for his second stay on board the International Space Station (ISS), will attract followers: classes from around 2,000 schools across France are invited to join the French astronaut in carrying out a major experiment on this funny creature. Although at first sight, a slime mould looks like a large, brightly-coloured patch of mildew, it is actually an amoebazoan, a unicellular organism containing several nuclei. A single individual can spread over several square metres and double in size in a day, while all its nuclei divide at the same time.

“We study slime moulds for their plasticity, which is exceptional for a single-celled organism,” explains Audrey Dussutour, senior researcher at the Research Centre on Animal Cognition (CRCA).1 “They can learn and remember, pass on information to their fellow creatures and find their way through a maze, in the same manner as animals that appear to be more sophisticated.” 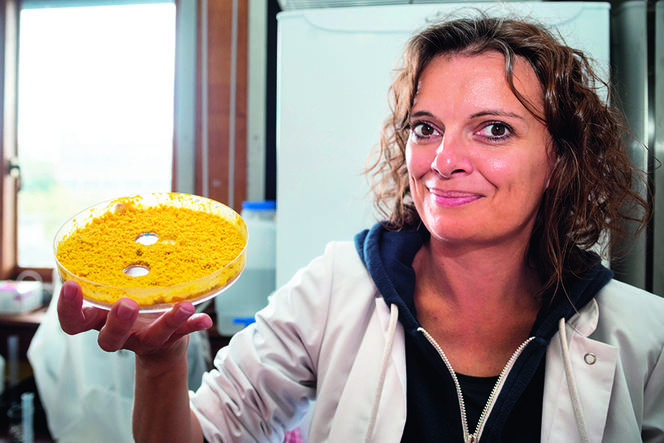 Audrey Dussutour, a slime mould specialist, presenting a specimen from which two pieces have just been removed.
Neither a fungus, a lichen or an animal, the slime mould belongs more specifically to the extensive class of myxomycetes, which contains about 10,000 species. The one preferred by scientists is Physarum polycephalum, a weird yellow mass of material that on Earth can be readily grown in the laboratory. But will this be true for the four slime moulds accompanying Pesquet into space?

The astronaut’s first job will be to rehydrate them in order to wake them from dormancy, a stable state that these moulds can maintain for several decades. Although it is not yet known how, this condition also regenerates the cell when it has aged excessively. “Our oldest specimen is seventy years old and is doing just fine,” says Dussutour, who wrote an award-winning popular science book on the subject,2 which in turn inspired a documentary.3 “We have also woken one individual that, amazingly, had been dormant for thirty years. Slime moulds differ widely from one another. Some are more sociable, faster, or better behaved, while others constantly try to escape!”

On the ISS, the moulds will be kept in lightproof Petri dishes where they will be filmed in short bursts, at a rate of a few seconds every ten minutes, so as to avoid too much exposure. In any case, they move so slowly that continuous observation is pointless.

In some dishes, four oat flakes – their favourite meal – will be placed in a square, at equal distance, while others will have no food. The videos will show whether the behaviour and strategies of the slime moulds change under microgravity. Under normal conditions, they connect to the flakes one by one. This phenomenon will be observed in France by some two thousand school classes, whose students will reproduce the experiment back on Earth with so many slime moulds prepared by Dussutour and her team. Organised primarily for educational purposes, the operation is supported by the French space agency CNES. 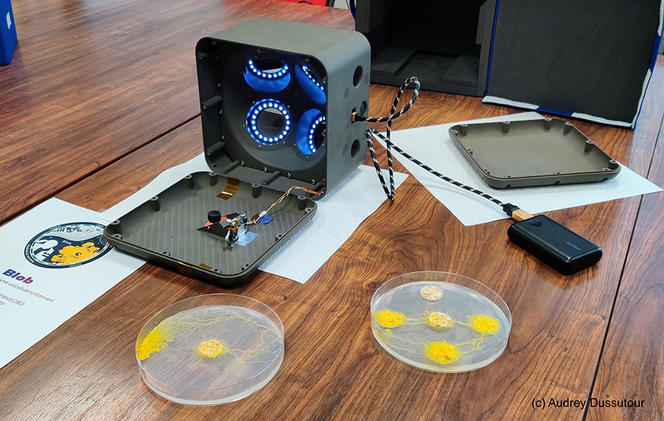 The slime moulds will be enclosed in a lightproof Petri dish during their stay aboard the ISS.

“Unfortunately, we can’t send enough specimens to the ISS to produce a scientific paper,” Dussutour regrets. “Every gram launched into space is hugely expensive, and every item is subject to strict protocols. Even the glue in the dishes and the filter papers, which enable the slime moulds to breathe, have to be approved.  We’re also trying out various ways of sterilising the moulds without causing them too much stress, since this is a mandatory step for anything entering the ISS.”

The whole set-up is roughly the size of a coffee pot, and is designed to keep the slime moulds in darkness while enabling them to breathe, and prevent them from escaping. This is extremely tricky, knowing how good these organisms are at squeezing through tiny gaps, and all the more so since they will for the first time be in zero gravity. The procedures for rehydrating and looking after them have also been recorded and optimised, since Pesquet will have to carry them out without opening the dishes, while at the same time performing many other tasks.

Waking up in zero gravity

The kits sent to schools will of course be simpler, and can fit inside an envelope. Despite the fact that slime moulds move so slowly, they fascinate young and old alike – so much so that they can be bought online together with the material required to conduct a few experiments. Some enthusiasts even exchange specimens. “They’ve become the new Tamagotchis. I’m always amazed and delighted at their success,” says Dussutour, whose links with the CNES date back to 2018, following one of her lectures aimed at making science accessible, at a time when slime moulds were attracting increasing attention from the general public.

“We’re hoping to be able to send more to the ISS during a future mission, especially if they turn out to exhibit surprising behaviour once in space,” the researcher explains. “For now, we will be happy if they simply wake up, since we don’t know how they will react to weightlessness. In any case, vibration tests have shown that being shaken around during lift-off shouldn’t affect them.” 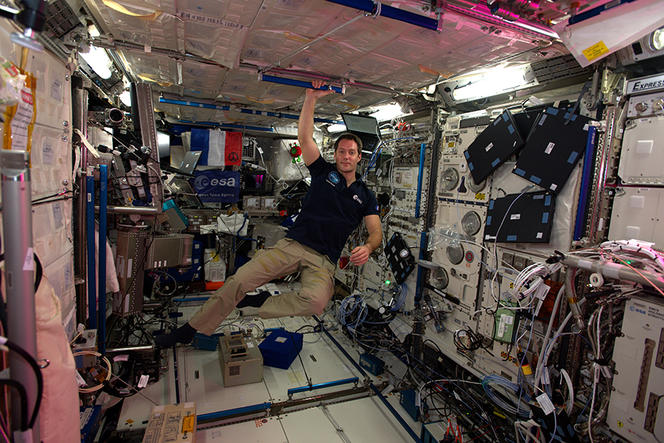 Astronaut Thomas Pesquet, here seen in Europe’s Columbus space laboratory, which is part of the ISS (26 November 2016, Proxima mission). Will the slime moulds be just as comfortable as he is in zero gravity?

Yet once on board the ISS, who knows how the slime moulds will respond to microgravity? While they are always flat and sheet-like on Earth, creeping over the surface of the substrate, Dussutour believes that weightlessness will enable them to form some kind of three-dimensional pillar-like structures, thus making these remarkable creatures even more talented.

“Although we still don’t understand how these unicellular slime moulds manage to do all this, they have already shattered the dogma that an organism cannot learn without a brain,” the researcher points out. “Humans thought for a long time that animals weren’t intelligent. They then believed the same thing about insects, then cells, etc. In fact, the creatures around us have to be pretty complex and versatile if they are to find food or a partner.”

Assisted by two students and two doctoral researchers, Dussutour is conducting genuine psychology experiments on slime moulds. The aim is to test their ability to make decisions when they are in the vicinity of nutrient sources that they cannot all reach at the same time.
When placed in the presence of its fellows, a slime mould can recognise the individuals that are in good health and not stressed by lack of food, in order to move closer to them and avoid the others. It can also identify those that have been exposed to light or poisoned, without having to touch them.

“A slime mould can even detect and keep away from another that has been stressed in the past but has since received food,” Dussutour notes. “It is thought that they communicate by releasing molecules, but we haven’t yet discovered which chemical compounds they use in the event of a problem. They do, however, emit calcium when healthy, which attracts their colleagues. They especially avoid hungry slime moulds, which for them are far worse than irradiated or poisoned individuals.” 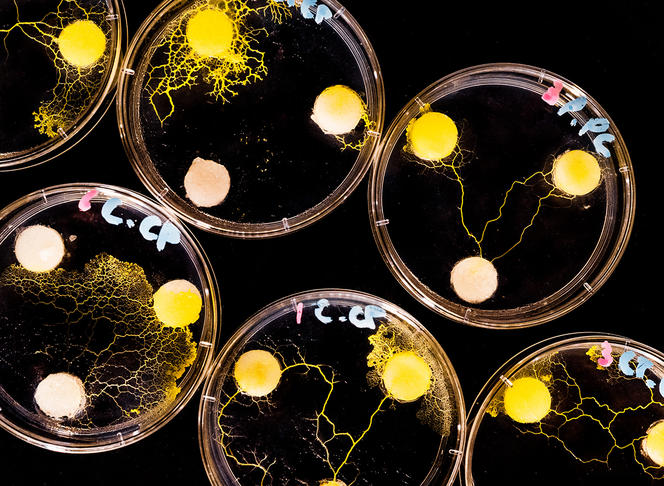 Slime moulds in Petri dishes. Although they have no brain, they are able to learn from experience, and pass on that information to a fellow slime mould. They do this by merging with it, thanks to an extremely dense vein network.

Although such incipient social behaviour fascinates researchers, slime moulds are also studied for reasons related to optimisation. These organisms are indeed made up of networks of veins that constantly change size and shape according to their needs. A Japanese team at Hokkaido University placed a myxomycete on a map of Japan where flakes of food had been laid down at the points representing large cities. The slime mould subsequently spread out, forming connections that were as reliable and efficient as the real Japanese rail network, but at lower cost, since it connected less often to points that were already sufficiently covered. With so many talents, what else do slime moulds hold in store for us?