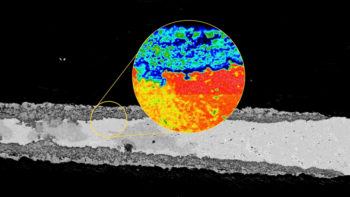 Will it be possible to design materials that are unfazed by extreme temperatures in the near future?

In a study published in the journal Nature Computational Materials, researchers at Texas A&M University have described a computational tool to evaluate a material’s suitability for high-temperature applications, such as gas turbines for jet engines and electrical power generators. The computational framework, which incorporates artificial intelligence and basic physics, can forecast how materials will behave under harsh conditions in a fraction of the time compared to other algorithms.

“We have used an innovative and interdisciplinary approach for screening materials that is a million times faster than traditional techniques,” said Raymundo Arróyave, professor in the Department of Materials Science and Engineering at Texas A&M and corresponding author on the study. “Currently, these types of calculations, even for a small temperature above absolute zero, are an enormous challenge because they are computationally expensive.”

Since the late 1800s, gas turbines have been the workhorse of power generation. This drum-shaped machine lined with a series of bent or curved blades converts chemical energy from burning fuel into mechanical energy when the turbine’s blades rotate. This motion is then exploited either to propel an aircraft or generate electricity.

Gas turbines operate in high-temperature, corrosive conditions, making them prone to damage and progressive deterioration. And so, designing materials that can withstand extreme temperatures has been an ongoing pursuit.

“These materials are ideal candidates for structural components for gas turbines and heat-resistant coatings,” said Miladin Radovic, professor in the materials science and engineering department and a senior author on the study. “However, only a few out of hundreds of possible MAX phases have been experimentally verified to be high-temperature corrosion and oxidation-resistant.”

The researchers noted that given the vast number of elements that can be used to make MAX phases and an even greater number of ways of combining them, the task of experimentally verifying how each composite will behave at high temperatures becomes impractical. On the other hand, computational techniques, such as purely machine-learning algorithms, have not been as robust at predicting the material’s behavior at nonzero temperatures.

As an alternative to experiments and machine learning, physics-based mathematical models offer a rigorous method to evaluate the properties of MAX phases at different temperatures. Among these models, the most established one, called density functional theory, can account for the behavior of materials with minimal input data. But this theory best applies to materials at their lowest energy state, called the ground state. To predict their behavior at elevated temperatures, more complex and time-consuming calculations are needed.

“These calculations scale very poorly,” said Arróyave. “For perspective, if we want to use density functional theory to calculate the properties of a candidate material at the lowest temperature of zero kelvins, that is at the ground state, it might take about a day of computational time. But now, if you want to calculate the same properties at a finite temperature, say 1000 kelvins, it can take weeks.”

Further, he notes that predicting the behavior of materials when exposed to oxygen at elevated temperatures is more complicated and may take months or longer, even when using thousands of supercomputer processors at a time.

Instead of relying solely on just one method, Arróyave and his team used a three-pronged approach that included a combination of density functional theory, machine learning and computational thermodynamics.

They first calculated some fundamental properties of MAX phases at zero kelvins with density functional theory. Then, those calculations were used as inputs to a machine-learning model. In this way, the researchers replaced otherwise computationally expensive calculations from density functional theory with machine-learning models. Then they used computational thermodynamics to determine the most stable compounds for a given temperature and a certain MAX phase composition.

“Let’s consider a MAX phase made of titanium, aluminum and carbon. At higher temperatures, we could have, for example, carbon dioxide, carbon monoxide, and other combinations of carbon and oxygen that might compete to exist,” said Arróyave. “Using our framework, one can now determine which phases or combinations we can expect at that temperature, how much of it and whether that can be detrimental. Simply put, we can now quickly tell whether the material will decompose at a given temperature.”

The researchers noted that although they tested their computational framework on a few candidate MAX phases, the algorithm can be used for gauging the behavior of other existing or novel materials as well.

“The research will help in rapidly ruling out those elements that might form unstable oxides at the material design phase,” said Arróyave. “We can then use these materials to build superior gas turbines and other machines that can withstand even the harshest environmental conditions with minimal wear and tear over time. These high-performance turbines will benefit not just the aviation and energy industry but also consumers, who will see reduced costs.”

This research is funded by the National Science Foundation.