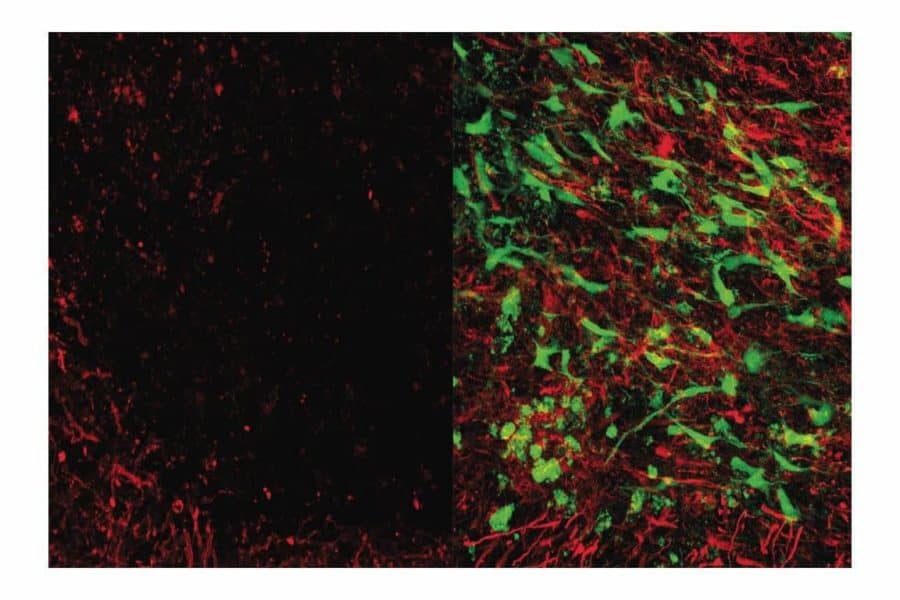 A one-time injection of an experimental stem cell therapy can repair brain damage and improve memory function in mice with conditions that replicate human strokes and dementia, a new UCLA study finds.

Dementia can arise from multiple conditions, and it is characterized by an array of symptoms including problems with memory, attention, communication and physical coordination. The two most common causes of dementia are Alzheimer’s disease and white matter strokes — small strokes that accumulate in the connecting areas of the brain.

“It’s a vicious cycle: The two leading causes of dementia are almost always seen together and each one accelerates the other,” said Dr. S. Thomas Carmichael, senior author of the study and interim director of the Eli and Edythe Broad Center of Regenerative Medicine and Stem Cell Research at UCLA.

An estimated 5 million Americans have dementia. “And with the aging population, that number is going to skyrocket,” Carmichael said.

Currently, there are no therapies capable of stopping the progression of white matter strokes or enhancing the brain’s limited ability to repair itself after they occur. The new study, published in Science Translational Medicine, identifies a cell therapy that can stop the progressive damage caused by the disease and stimulate the brain’s own repair processes.

The cells used in the therapy are a specialized type of glial cells, which are cells that surround and support neurons in the central nervous system. Carmichael and his collaborators evaluated the effects of their glial cell therapy by injecting it into the brains of mice with brain damage similar to that seen in humans in the early to middle stages of dementia.

“Upon injection, our cell therapy traveled to damaged areas of the brain and secreted chemicals called growth factors that stimulated the brain’s stem cells to launch a repair response,” said Dr. Irene Llorente, the paper’s first author and an assistant research professor of neurology at the David Geffen School of Medicine at UCLA.

Activating that repair process not only limited the progression of damage, but it also enhanced the formation of new neural connections and increased the production of myelin — a fatty substance that covers and protects the connections.

“Understanding the role that glia play in repairing white matter damage is a critically important area of research that needs to be explored,” said Francesca Bosetti, a program director at the National Institutes of Health’s National Institute of Neurological Disorders and Stroke, which supported the study. “These preliminary results suggest that glial cell-based therapies may one day help combat the white matter damage that many stroke and vascular dementia patients suffer every year.”

The therapy was developed in collaboration with Bill Lowry, a UCLA professor of molecular, cell and developmental biology. The team used a method, previously discovered by Lowry, for quickly producing large numbers of glial cells by treating human induced pluripotent stem cells with a drug called deferoxamine. Induced pluripotent stem cells are derived from skin or blood cells that have been reprogrammed back to an embryonic stem cell–like state from which scientists can create an unlimited supply of any cell type.

In the future, if the therapy is shown to be safe and effective through clinical trials in humans, the researchers envision it becoming an “off-the-shelf” product, meaning that the cells would be mass manufactured, frozen and shipped to hospitals, where they could be used as a one-time therapy for people with early signs of white matter stroke.

That would set the treatment apart from patient-specific cell therapies, which are created using each individual patient’s own cells. While patient-specific cell therapies are appealing because they do not require patients to take drugs to prevent their immune systems from rejecting the transplanted cells, they are also expensive and can take weeks or months to produce.

“The damage from white matter strokes is progressive, so you don’t have months to spend producing a treatment for each patient,” said Carmichael, who is also chair of neurology at the medical school. “If you can have a treatment that’s already in the freezer ready to go during the window of time when it could be most effective, that’s a much better option.”

The brain is a particularly good target for off-the-shelf cell therapies because immune activity in the brain is highly controlled. That feature, known as immune privilege, allows donor cells or tissues that would be rejected by other parts of the body to survive for prolonged, even indefinite, periods.

Interestingly, the researchers found that even if they eliminated the injected cells a few months after they had been transplanted, the mice’s recovery was unaffected. That’s because the therapy primarily serves as a wake-up call to stimulate the brain’s own repair processes.

“Because the cell therapy is not directly repairing the brain, you don’t need to rely on the transplanted cells to persist in order for the treatment to be successful,” Carmichael said.

The team is now conducting the additional studies necessary to apply to the Food and Drug Administration for permission to test the therapy in a clinical trial in humans.

The cell therapy is covered by a patent application filed by the UCLA Technology Development Group on behalf of the Regents of the University of California, with Carmichael, Lowry and Llorente listed as co-inventors. The treatment was used in preclinical tests only and has not been tested in humans or approved by the FDA as safe and effective for use in humans.