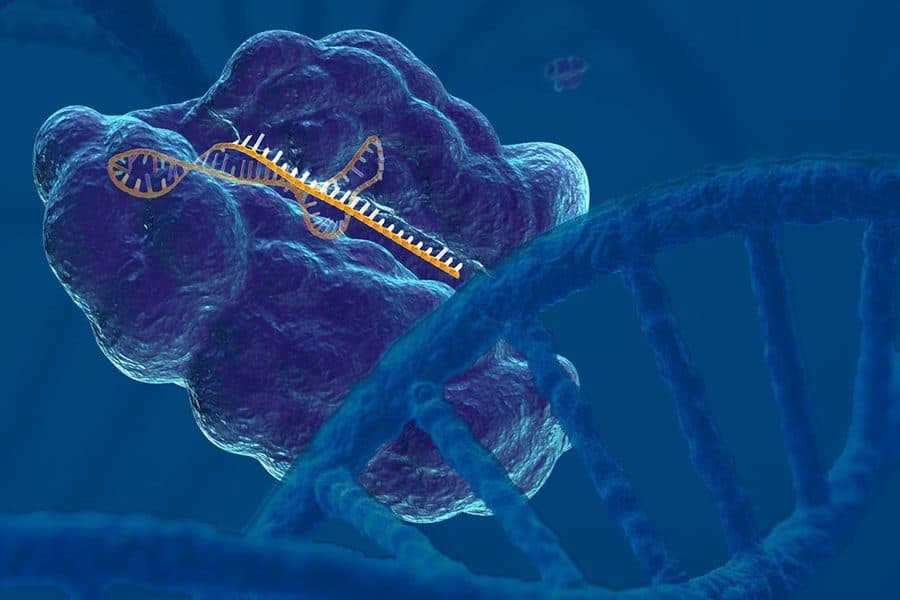 CRISPR’s potential to prevent or treat disease is widely recognized. But the gene-editing technology can also be used as a research tool to probe and understand diseases.

That’s the basic insight behind KSQ Therapeutics. The company uses CRISPR to alter genes across millions of cells. By observing the effect of turning on and off individual genes, KSQ can decipher their role in diseases like cancer. The company uses those insights to develop new treatments.

The approach allows KSQ to evaluate the function of every gene in the human genome. It was developed at MIT by co-founder Tim Wang PhD ’17 in the labs of professors Eric Lander and David Sabatini.

“Now we can look at every single gene, which you really couldn’t do before in a human cell system, and therefore there are new aspects of biology and disease to discover, and some of these have clinical value,” says Sabatini, who is also a co-founder.

KSQ’s product pipeline includes small-molecule drugs as well as cell therapies that target genetic vulnerabilities identified from their experiments with cancer and tumor cells. KSQ believes its CRISPR-based methodology gives it a more complete understanding of disease biology than other pharmaceutical companies and thus a better chance of developing effective treatments to cancer and other complex diseases.

A tool for discovery

KSQ’s scientific co-founders had been studying the function of genes for years before advances in CRISPR allowed them to precisely edit genomes about 10 years ago. They immediately recognized CRISPR’s potential to help them understand the role of genes in disease biology.

During his PhD work, Wang and his collaborators developed a way to use CRISPR at scale, knocking out individual genes across millions of cells. By observing the impact of those changes over time, the researchers could tease out the functionality of each gene. If a cell died, they knew the gene they knocked out was essential. In cancer cells, the researchers could add drugs and see if knocking out any of the genes affected drug resistance. More sophisticated screening methods taught the researchers how different genes inhibit or drive tumor growth.

“It’s a tool for discovering human biology at scale that was not possible before CRISPR,” says KSQ co-founder Jonathan Weissman, a professor of biology at MIT and a member of the Whitehead Institute. “You can search for genes or mechanisms that can modulate essentially any disease process.”

Wang credits Sabatini with spearheading the commercialization efforts, speaking with investors, and working with MIT’s Technology Licensing Office. Wang also says MIT’s ecosystem helped him think about bringing the technology out of the lab.

“Being at MIT and in the Cambridge area probably made the leap to commercialization a bit easier than it would have been elsewhere,” Wang says. “A lot of the students are entrepreneurial, there’s that rich tradition, so that helped shape my mindset around commercialization.”

Weissman had developed a complementary, CRISPR-based technology that Wang and Sabatini knew would be useful for KSQ’s discovery platform. Around 2015, as the founders were starting the company, they also brought on co-founder William Hahn, a member of the Broad Institute of MIT and Harvard, a professor at Harvard Medical School, and the chief operating officer of the Dana-Farber Cancer Institute.

Since then, the company has advanced Wang’s method.

“They’re able to scale this to a degree that is not possible in any academic lab, even David’s,” Wang says. “The cell lines I used for my experiments were just what was easy to grow and what was in the lab, whereas KSQ is thinking about what therapies aren’t available in certain cancers and deciding what diseases to go after.”

KSQ’s gene evaluations include tens of millions of cells. The company says the data it collects has been predictive of past successes and failures in cancer drug development. Weissman equates the data to “a roadmap for finding cancer vulnerabilities.”

“Cancers have all these different escape routes,” Weissman says. “This is a way of mapping out those escape routes. If there are too many, it’s not a good target to go after, but if there is a small number, you can now start to develop therapies to block off the escape routes.”

From discovery to impact

“I’ve always thought the best biotech companies start with information that other people don’t have,” Sabatini says. “I think biotech companies have to have some discovery to them. That’s enabled KSQ to go in different directions.”

The founders feel KSQ has already validated their approach and stimulated further interest in using CRISPR as a research tool.

“There’s a lot of interest in CRISPR as a therapeutic, and that’s an important aspect,” Weissman says. “But I’d argue equally important both in discovery and in therapeutics will be [using CRISPR] to identify the targets you want to go after to affect disease process. Your ability to engineer genomes or make drugs depends on knowing what genes you want to change.”