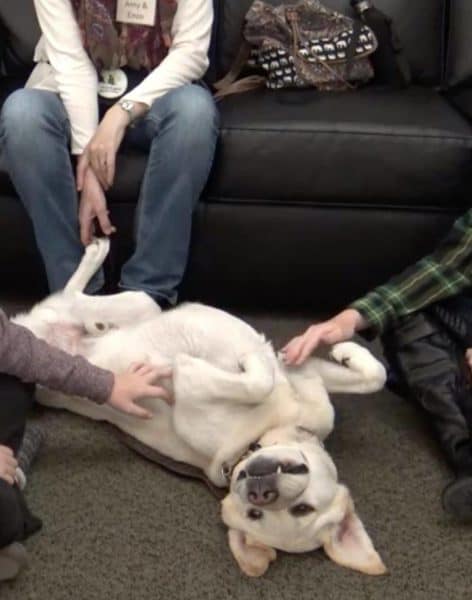 For college students under pressure, a dog may be the best stress fighter around.

The study was published today in the journal AERA Open, a peer-reviewed journal of the American Educational Research Association. The paper demonstrated that stressed students still exhibited these cognitive skills improvements up to six weeks after completion of the four-week-long program.

“It’s a really powerful finding,” said Patricia Pendry, associate professor in WSU’s Department of Human Development. “Universities are doing a lot of great work trying to help students succeed academically, especially those who may be at risk due to a history of mental health issues or academic and learning issues. This study shows that traditional stress management approaches aren’t as effective for this population compared with programs that focus on providing opportunities to interact with therapy dogs.”

The researchers measured executive functioning in the 309 students involved in the study. Executive function is a term for the skills one needs to plan, organize, motivate, concentrate, memorize: “all the big cognitive skills that are needed to succeed in college,” Pendry said.

Pendry conducted this study as a follow up to previous work, which found that petting animals for just 10 minutes had physiological impacts, reducing students’ stress in the short-term.

In the three-year study, students were randomly assigned to one of three academic stress-management programs featuring varying combinations of human-animal interaction and evidenced-based academic stress management. The dogs and volunteer handlers were provided through Palouse Paws, a local affiliate of Pet Partners, a national organization with over 10,000 therapy teams.

“The results were very strong,” Pendry said. “We saw that students who were most at risk ended up having most improvements in executive functioning in the human-animal interaction condition. These results remained when we followed up six weeks later.”

Many universities, including WSU, have provided academic stress management programs and workshops for many years. These are traditionally very similar to college classes, where students listen to an expert, watch slideshows and take notes. They’re often evidence-based courses that talk about ways to get more sleep, set goals, or manage stress or anxiety.

“These are really important topics, and these workshops are helping typical students succeed by teaching them how to manage stress,” Pendry said. “Interestingly though, our findings suggest that these types of educational workshops are less effective for students that are struggling. It seems that students may experience these programs as another lecture, which is exactly what causes the students to feel stressed.”

Human-animal interaction programs help by letting struggling students relax as they talk and think about their stressors. Through petting animals, they are more likely to relax and cope with these stressors rather than become overwhelmed. This enhances students’ ability to think, set goals, get motivated, concentrate and remember what they are learning, Pendry said.

“If you’re stressed, you can’t think or take up information; learning about stress is stressful!” she said.

“You can’t learn math just by being chill,” Pendry said. “But when you are looking at the ability to study, engage, concentrate and take a test, then having the animal aspect is very powerful. Being calm is helpful for learning especially for those who struggle with stress and learning.”