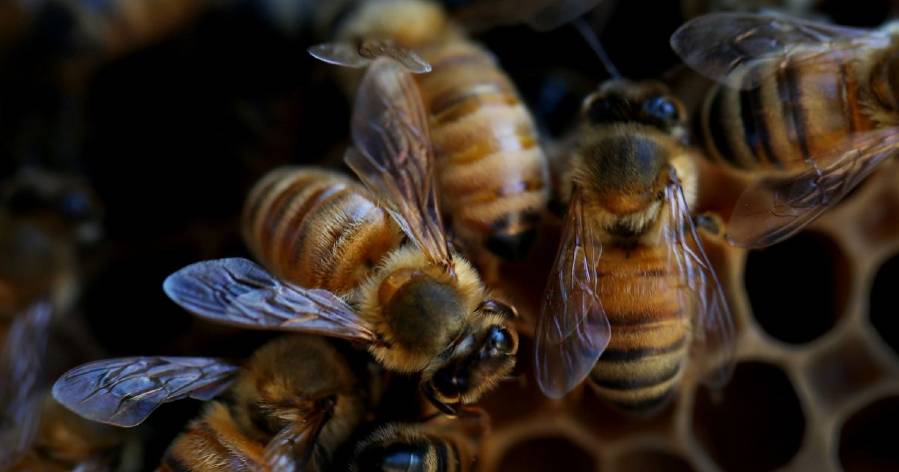 Honey bees are the most economically important agricultural pollinators on Earth, but their populations have been in decline for decades. At Indiana University, researchers are investigating how to use the honey bee’s natural microbiome to keep them healthy, which has implications for food security and the agricultural industry.

In a paper published June 8 in the journal mBio, IU scientists identified a specific bacterial microbe that protects bees from fungal infection. The microbe is found in key colony environments such as queen guts and developing larval bees, as well as in honey and pollen.

“We had previously known a fair amount about the honey bee worker gut microbiome and how it may protect from bacterial disease,” said Irene Newton, the senior author on the study and an associate professor in the IU Bloomington College of Arts and Sciences’ Department of Biology. “But the microbiome of the developing larvae and queens is less well understood.”

An average of 40% to 50% of honey bee colonies in the U.S. die annually. Pests, pathogens, nutritional stress, pesticide use and agricultural practices — such as the use of antibiotics — are likely causes of the declining survival rates. The ripple effect is a food security issue. It’s estimated that one of every three mouthfuls of food in the U.S. depends upon pollination from bees. The negative effects would be particularly stark for popular crops such as fruits and tree nuts.

The queen is the key to the health of honey bee colonies. As the matriarch, the queen produces hundreds to thousands of eggs per day to maintain colony numbers.

“Any microbe that could impact queen and larval health could therefore directly influence colony health. Without the queen, the colony cannot survive,” Newton said.

Queens do not live as long as they used to, with 55% of colonies going into the winter with a new queen. This adds a significant cost to beekeepers and increases risk of colony loss over the winter.

The microbiome, or the community of microbes that lives with an organism, can have a dramatic influence on host health. Newton’s lab discovered that one specific microbe associated with queens and larval bees — Bombella apis — inhibits the growth of fungi. Newton and her colleagues began studying B. apis over six years ago after finding that it is a significant part of the queen gut microbiome.

“Bees, as highly social organisms that share food stores and participate in feeding behaviors with nestmates, are at a high risk of contracting and transmitting contagious diseases,” said IU graduate student Delaney Miller, the lead author of the study. “Many fungi that are found commonly in our environment, in the soil and flowers surrounding the hive, can be deadly to honey bee offspring if transmitted into the hive.”

The addition of Bombella apis, however, could protect bees from these opportunistic pathogens.

The common practice of treating honey bees with antibiotics may alter the beneficial microbes present, including Bombella apis.

“We have not done field trials with antibiotics to determine if treatment would alter Bombella apis numbers in a colony,” Miller said. “However, all the strains we have isolated are sensitive to tetracycline, an antibiotic commonly used on bees.”

If populations of the protective microbe are reduced, it may make bees more sensitive to fungal infection.

The next step for the researchers is to identify the antifungal molecule itself. Newton is currently collaborating with Marcy Balunas at the University of Connecticut to discover what the antifungal compound may be.

“We are excited to see what the structure of the antifungal is — it may be a novel metabolite,” Newton said.

The study was supported by a major award from the National Science Foundation Integrated Organismal Systems and an NSF Biology Integration Institute award.