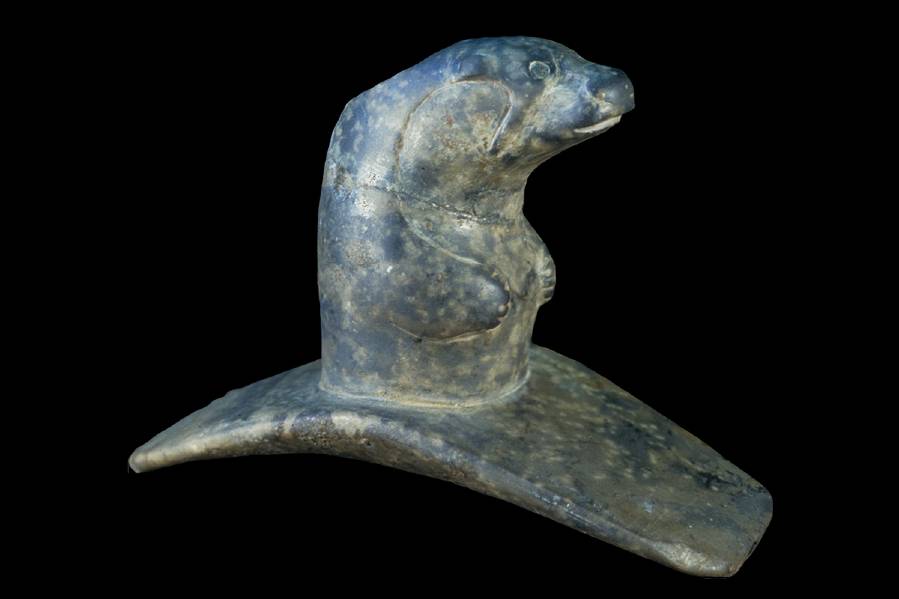 Nineteenth- and 20th-century archaeologists often made sweeping claims about Native cultures, suggesting that everyone who lived in a particular region at a given time shared the same attitudes and practices. A new study of pipes recovered from Hopewell sites in Illinois and Ohio challenges this assumption, revealing that the manufacture, import, export and use of pipestone pipes for smoking varied significantly between the groups, even though they engaged in trade with one another.

The Hopewell era ran from about 50 B.C. to A.D. 250. The new findings are reported in the journal American Antiquity.

A Sterling pipestone effigy pipe of a bird pecking a human face. The pipe was found in Pike County, Illinois.

The Havana and Scioto Hopewell people, who lived in what is now Illinois and Ohio, respectively, shared some cultural practices that caused early observers to overlook their differences, said archaeologist Thomas Emerson, a former director of the Illinois State Archaeological Survey at the University of Illinois Urbana-Champaign who led the new research.

“People at that time began to build ritual areas that included very large, centralized burial mounds and geometric earthwork enclosures,” Emerson said. “Their society was supported basically by what we call ‘early agricultural complex.’ They didn’t have maize until many centuries later, but they were growing other native grains.”

Like their Ohio counterparts, the Hopewell people in Illinois established centers where they sometimes gathered, Emerson said.

“This seems to be a unifying factor in their societies,” he said. “They needed a mechanism that pulled them together to socialize, exchange information, locate mates, all these integrating kinds of activities.”

These regional gathering places “revolved around some form of religious or ritual activity as the center that held them together,” Emerson said.

Hopewell people also used pipes carved from various types of sedimentary stone collected from quarries across the region. In the 19th century, archaeologists found huge caches of such pipes in Ohio Hopewell sites and assumed that Ohio had been a major hub of pipestone manufacture and trade. Later studies, including one in 2013 conducted by Emerson and colleagues, revealed that most of the pipestone pipes found in Ohio had been quarried and manufactured in Illinois.

Hopewell era pipestone pipes have been found up and down the Illinois River valley, with higher concentrations of pipes recovered from the darkly shaded areas.

Map by Michael B. Vincent

The pipes were used for smoking tobacco and probably other plants, Emerson said. The act of smoking was almost always tied to ritual or spiritual activities.

For the new study, Emerson and his colleagues took a closer look at the pipes recovered from Hopewell sites in Illinois. They found that more than half of the dozens of pipes they analyzed from the Illinois River valley were made from Sterling pipestone collected from northern Illinois quarries. About a third of the remaining pipes were carved from local limestone. The rest were made from more distantly imported stones, such as catlinite, serpentine, Wyandotte Cave aragonite, black chlorite and steatite.

In Ohio, it was common to find large collections of pipes that had been broken and buried together, Emerson said. This suggests an organized communal rite.

“But in Illinois, pipes almost always show up as single items associated with a very few people. Only about 2% of the population is buried with a pipe,” he said. Most pipe-related burials involved men, but pipes were also found buried with women and, in two cases, children. Other pipes were found in home sites. Some of them had been broken and repaired for continued use.

Native peoples of the Hopewell era collected stone for carving pipes from a few quarries scattered across the Midwest. Nineteenth- and 20th-century archaeologists found large collections of broken pipes in Tremper Mound and Mound City in Ohio, two major centers of the Scioto Hopewell people in present-day Ohio. Many of these pipes had been carved in Illinois from Illinois Sterling pipestone.

Chunks of Sterling pipestone are found in many locales in Illinois, suggesting local manufacture.

“But only certain people seem to have the authority or the social standing or the ritual power to actually make the pipestone into pipes,” Emerson said. “There is evidence for some kind of social ranking or status, but it’s not anywhere near the level that occurs in Ohio.”

The massive size of the earthworks in Ohio and the ritual disposal of pipes there suggests a much more hierarchical society than that of Illinois, he said.

“In Illinois, people appear to be fairly free and empowered at an individual level, there’s little overt social or political control,” Emerson said. “When we look more closely at what’s going on at the local level, we realize Native societies were more diverse in the past than is often realized.”