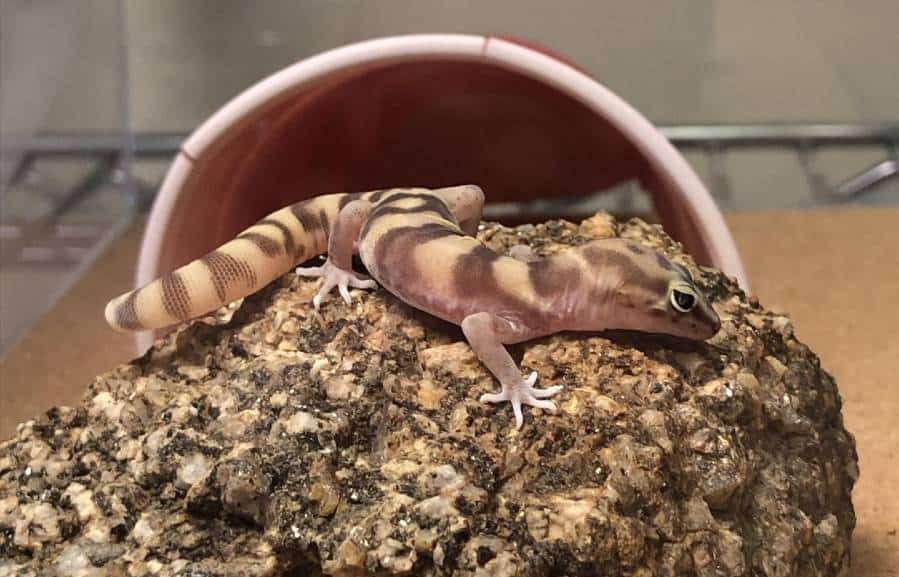 Western banded gecko, native to the southwestern US and Mexico.

Anew UC Riverside study finds geckos are fierce hunters whether or not their tails are attached to their bodies.

Geckos and other lizards can distract predators by quickly dropping their tails. The tail vertebrae are perforated, making it easier to disconnect them without any formation of scar tissue or loss of blood. Though this ability can keep lizards from being eaten, the maneuver is performed at a cost.

“Other studies have documented the negative effects of tail loss on lizards’ ability to run, jump, mate, and reproduce,” said UCR biologist Marina Vollin, lead author of the study. “However, few have examined their ability to capture food when they lose their tails, which is critical for regenerating the tail and for overall survival.”

To help fill this gap in understanding, Vollin and Tim Higham, an associate professor in UCR’s Department of Evolution, Ecology, and Organismal Biology, observed intact and newly tailless geckos on the hunt. Their work is published in a recent Integrative and Comparative Biology journal article.

The researchers found that geckos successfully captured crickets about 77% of the time both before and after losing tails — a surprising retention of accuracy since tails appear to help stabilize gecko body positions during and after a strike.

“The geckos were much slower without tails, and their attack strikes much more awkward,” Vollin said.

Western banded geckos, native to the southwestern U.S. and Mexico, are one of the few reptiles that help control scorpion populations.

In this study, the geckos were observed hunting crickets in artificial enclosures. Vollin and Higham are planning future studies in which they hope to observe geckos hunting in the wild and feeding on other small insects.

“It is very possible that geckos suffer a loss in feeding performance and success following autotomy in nature given the complexity of the habitat and more room for the prey to escape,” Higham said.

They’ll also study whether geckos are able to fully regain their agility once their tails have regenerated, which can take up to a month.

“It’s important to get a sense of how they operate in nature, where additional elements could affect whether they have more difficulty capturing prey,” Vollin said.

Understanding how lizards like the Western banded gecko are able to survive carries a significance beyond the lizards themselves. Though they eat a variety of small insects, they also serve as a key food source for birds, snakes, and other predatory mammals.

“I’ve heard them referred to as ‘nature’s popcorn,’ because other animals can eat a bunch of them at once, they’re abundant, and easy to acquire,” Vollin said. “They’re a big part of the base of the food chain.”