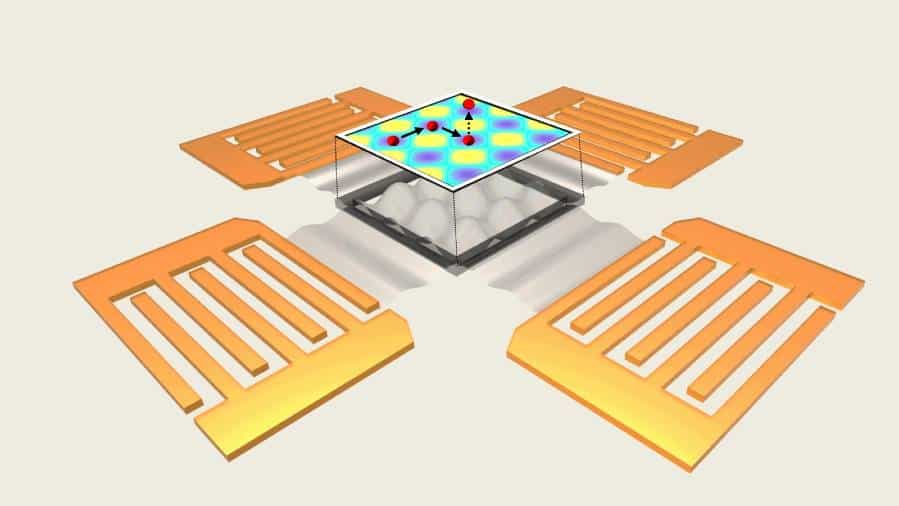 This new biomedical device manipulates particles as small as DNA (2.5 nanometers) with sound-induced electric fields. Four transducers send sound waves into a substrate that creates electricity as it vibrates, producing patterns of electric-acoustic waves that control particles in the liquid-filled chamber above.

Engineers at Duke University have devised a system for manipulating particles approaching the miniscule 2.5 nanometer diameter of DNA using sound-induced electric fields. Dubbed “acoustoelectronic nanotweezers,” the approach provides a label-free, dynamically controllable method of moving and trapping nanoparticles over a large area. The technology holds promise for applications in the fields ranging from condensed matter physics to biomedicine.

The research appears online on June 22 in Nature Communications.

Precisely controlling nanoparticles is a crucial ability for many emerging technologies. For example, separating exosomes and other tiny biological molecules from blood could lead to new types of diagnostic tests for the early detection of tumors and neurodegenerative diseases. Placing engineered nanoparticles in a specific pattern before fixing them in place can help create new types of materials with highly tunable properties.

For more than a decade, Tony Jun Huang, the William Bevan Distinguished Professor of Mechanical Engineering and Materials Science at Duke, has pursued acoustic tweezer systems that use sound waves to manipulate particles. However, it becomes difficult to push things around with sound when their profile drops below that of some of the smallest viruses.

“Although we’re still fundamentally using sound, our acoustoelectronic nanotweezers use a very different mechanism than these previous technologies,” said Joseph Rufo, a graduate student working in Huang’s laboratory. “Now we’re not only exploiting acoustic waves, but electric fields with the properties of acoustic waves.”

Instead of using sound waves to directly move the nanoparticles, Huang, Rufo and Peiran Zhang, a postdoc in Huang’s laboratory, use sound waves to create electric fields that provide the push. The new acoustoelectronic tweezer approach works by placing a piezoelectric substrate—a thin material that creates electricity in response to mechanical stress—beneath a small chamber filled with liquid. Four transducers are aligned on the chamber’s sides, which send sound waves into the piezoelectric substrate.

“Our next goal is to improve the resolution of acoustoelectronic nanotweezers to the level of a single molecule level while scaling up the working area to a meter. With those improvements, we would be able to achieve macroscale materials and devices with precisely positioned nanostructures and unprecedented properties. We believe that our technology will be useful in many important areas including nanomedicine, nanoelectronics, self-assembly and wearable electronics.”

These sound waves bounce around and interact with one another to create a stable pattern. And because the sound waves are creating stresses within the piezoelectric substrate, they also create electrical fields. These couple with the acoustic waves in a way that creates electric field patterns within the chamber above.

“The vibrations of the sound waves also make the electric field dynamically alternate between positive and negative charges,” said Zhang. “This alternating electric field polarizes the nanoparticles in liquid, which serves as a handle to manipulate them.”

The result is a mechanism that mixes some of the strengths of other nanoparticle manipulators. Because the acoustoelectronic nanotweezers induce an electromagnetic response in the nanomaterials, the nanoparticles do not need to be conductive on their own or tagged with any sort of modifier. And because the patterns are created with sound waves, their positions and properties can be quickly and easily modified to create a variety of options.

In the prototype, the researchers show nanoparticles placed into striped and checkerboard patterns. They even push individual particles around in an arbitrary manner dynamically, spelling out letters such as D, U, K and E. The researchers then demonstrate that these aligned nano-patterns can be transferred onto dry films using delicate nanoparticles such as carbon nanotubes, 3.5-nanometer proteins and 1.4-nanometer dextran often used in biomedical research. And they show that all of this can be accomplished on a working area that is tens to hundreds of times larger than current state-of-the-art nanotweezing technologies.