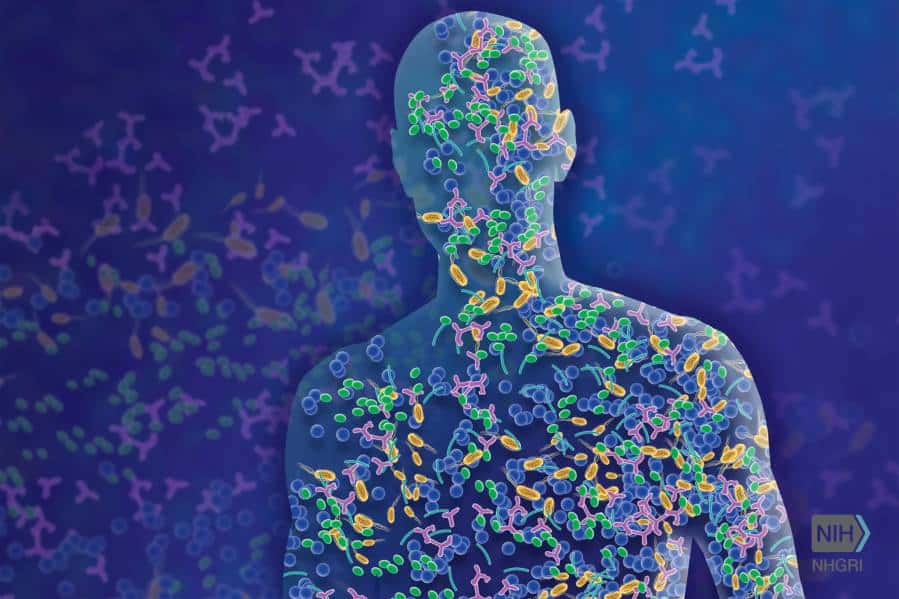 National Institutes of Health scientists and their collaborators have identified an internal communication network in mammals that may regulate tissue repair and inflammation, providing new insights on how diseases such as obesity and inflammatory skin disorders develop. The new research is published in Cell.

The billions of organisms living on body surfaces such as the skin of mammals — collectively called microbiota — communicate with each other and the host immune system in a sophisticated network. According to the study, viruses integrated in the host genome, remnants of previous infections called endogenous retroviruses, can control how the host immune system and the microbiota interact, affecting tissue repair and antimicrobial defenses. Endogenous retroviruses  can comprise up to 10% of all genes.

The newly discovered role of endogenous retroviruses adds to the scientific community’s understanding of certain diseases and inflammatory states and opens new research avenues. “Together, our results support the idea that mammals may have co-opted their endogenous viromes as a means to communicate with their microbiota, resulting in a multi-kingdom dialogue that controls both immunity and inflammation,” the authors state.

Scientists from NIH’s National Institute of Allergy and Infectious Diseases led the project with collaborators from the NIH Center for Human Immunology, the National Cancer Institute, Stanford University and Scripps Research in California, University of Pennsylvania in Philadelphia, University of Oxford and The Francis Crick Institute in England.

Building on a series of studies over the past decade showing that microbiota broadly promote immune protection, the NIAID scientists and collaborators sought to discover how this occurs. They used Staphylococcus epidermidis, a common skin bacterium with known helpful and harmful features, as a study model in laboratory and mouse experiments.

The models helped them identify the important roles of skin cells called keratinocytes and of endogenous retroviruses in communication between microbiota and the skin immune system. Keratinocytes are the primary interface between the host and its microbiota. Their study showed that S. epidermidis triggered an antiviral response in keratinocytes, and that finding led them to discover that endogenous retroviruses coordinate responses to the microbiota that stimulate the immune system.

The mouse model also showed that a high-fat diet triggers an inflammatory immune response to S. epidermidis that can be controlled by providing antiretroviral treatment, suggesting a role for endogenous retroviruses in driving inflammatory responses caused by microbes under high-fat conditions. The researchers will continue exploring how these ancient viruses control the beneficial role of the microbiota and how nutrition can change this dialogue toward pro-inflammatory responses.

Yasmine Belkaid, Ph.D., chief of NIAID’s Metaorganism Immunity Section in the Laboratory of Immune System Biology, is available to comment.

NIAID conducts and supports research — at NIH, throughout the United States, and worldwide — to study the causes of infectious and immune-mediated diseases, and to develop better means of preventing, diagnosing and treating these illnesses. News releases, fact sheets and other NIAID-related materials are available on the NIAID website.