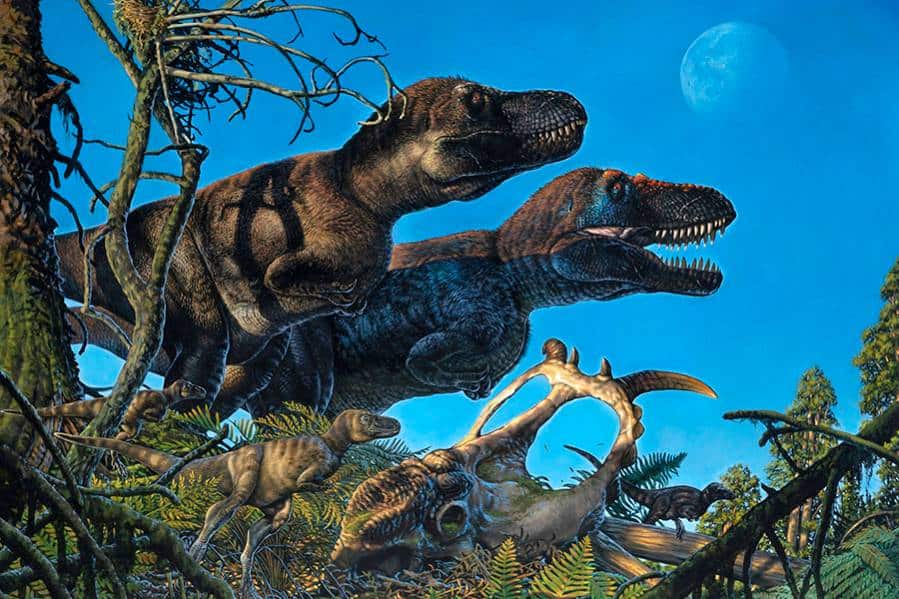 Long-standing images of dinosaurs as cold-blooded creatures needing tropical temperatures could be a relic of the past.

University of Alaska Fairbanks and Florida State University paleontologists have found that nearly all types of dinosaurs — from small bird-like forms to the giant tyrannosaurus — not only reproduced in the region, but also remained there year-round.

Their findings are detailed in a new paper published in the journal Current Biology.

“It wasn’t long ago that people were pretty shocked to find out that dinosaurs lived up in the Arctic 70 million years ago,” said Pat Druckenmiller, the paper’s lead author and director of the University of Alaska Museum of the North. “We now have unequivocal evidence they were nesting up there as well, like nurseries of the north. This is the first time that anyone has ever demonstrated that dinosaurs could reproduce at such high latitudes.”

The findings counter previous hypotheses that dinosaurs migrated to lower latitudes for the winter and also provides some of the most compelling evidence thus far that these prehistoric creatures were warm-blooded.

Druckenmiller and Florida State University Professor of Biological Science and study co-author Gregory Erickson have been conducting fieldwork in the Prince Creek Formation in northern Alaska for more than a decade, unearthing a diversity of dinosaur species, most, if not all of which are new to science. Their latest discovery shows evidence of dinosaurs in the earliest stages of life living close to the ancient Arctic Ocean.

The researchers found tiny teeth —some less than 2 millimeters in length — and bones from seven species of perinatal dinosaurs, a term that describes baby dinosaurs that are either embryonic (just about to hatch) or have just hatched.

“One of the biggest mysteries about Arctic dinosaurs was whether they seasonally migrated up to the North or were year-round denizens,” Erickson said. “We unexpectedly found remains of perinates representing almost every kind of dinosaur in the formation. It was like a prehistoric maternity ward”.

The process of recovering the bones and teeth, some no larger than the head of a pin, is an exercise in perseverance and a sharp eye. In the field, the scientists haul buckets of sediment from the face of the bluffs down to the river’s edge, where they wash the material through smaller and smaller screens until they have removed any large rocks and soil.

Once back at the lab, they run the material through more screens to remove all the clay, until all that’s left is sandy particles. Then, teaspoon by teaspoon, the team, including graduate and undergraduate students examine the sand under microscopes to find the bones and teeth.

“Recovering these tiny fossils is like panning for gold,” Druckenmiller said. “It requires a great amount of time and effort to sort through tons of sediment grain-by-grain under a microscope. The fossils we found are rare but are scientifically rich in information.”

The next step in the process involved identifying and comparing the fossils to those from other sites at lower latitudes, such as Alberta and Montana. Co-authors Caleb Brown and Don Brinkman of the Royal Tyrrell Museum of Paleontology provided valuable information from the extensive collections at their museum.

Once they knew the dinosaurs were nesting in the Arctic, it was a relatively straight line to the realization that the animals must have lived their entire lives in the region.

Erickson’s previous research had found that the incubation period for these types of dinosaurs is anywhere between about three to six months, depending on species. Because Arctic summers are short, even if the dinosaurs laid their eggs as soon as it warmed up in the spring, their offspring would be too young to migrate in the fall.

Global temperatures were much warmer during the Cretaceous, but the angle of the Earth’s axis was much the same as it is today. That means dinosaurs encountered about four months of darkness per year, with temperatures dropping below freezing and periods of snow. There also would have been little to no fresh vegetation for food.

“Year-round residency in the Arctic provides a natural test of dinosaurian physiology,” Erickson said. “We solved several long-standing mysteries about the dinosaur reign, but opened up a new can of worms — how did they survive Arctic winters?”

Researchers can only guess for now at how these mysterious creatures lived. Perhaps the smaller ones hibernated through the winter, Druckenmiller said. Perhaps others lived off poor-quality forage, much like today’s moose, until the spring.

Scientists have found other warm-blooded animal fossils in the region, such as small mammals and birds, but not lizards, snakes, crocodiles, amphibians or turtles. That suggests these cold-blooded animals could not survive the frigid temperatures of the region.

“This study goes to the heart of one of the longest-standing questions among paleontologists: Were dinosaurs warm-blooded?” Druckenmiller said. “We think that endothermy was probably an important part of their survival.”

Other co-authors of the study are Donald Brinkman and Caleb Brown of the Royal Tyrrell Museum of Paleontology in Alberta, Canada and Jaelyn Eberle of the University of Colorado, Boulder.