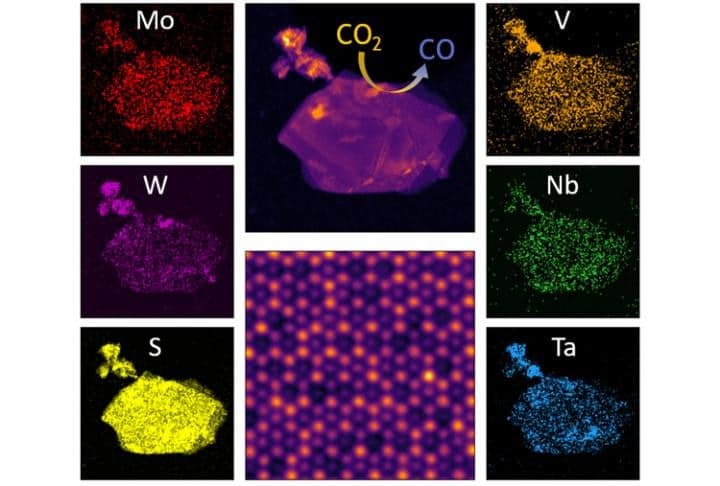 And, in a first for such a material, it has been shown to act as an excellent catalyst for reducing CO2, into CO, with potential applications in environmental remediation.

The research, from the lab of Rohan Mishra, assistant professor in the Department of Mechanical Engineering & Materials Science at Washington University, was published Saturday, June 26, in the journal Advanced Materials.

“We’re looking at transforming carbon dioxide, which is a greenhouse gas, into carbon monoxide,” Mishra said. “Carbon monoxide can be combined with hydrogen to make methanol. It could be a way to take CO2 from the air and recycle it back into a hydrocarbon.”

TMDCs are not new. There has been interest in similar two-dimensional forms of these materials due to their unique optical and electronic properties, Mishra said. But he had a suspicion they could be used for something else.

“We’ve been looking at these, too, but exploring their potential for electrocatalysis,” acting as a catalyst to facilitate chemical reactions. As they are effectively two-dimensional (about three atoms thick), they make for efficient catalysts; reactions occur on the surface of a material, and a two-dimensional material has a lot of surface area, and not much else. In an earlier study, also published in the journal Advanced Materials in 2020, the group had shown that two-metal TMDC alloys showed improved catalytic activity over individual TMDCs. “This led us to the question, can adding more metals to these alloys make even better catalysts?” Mishra said.

With 10 applicable transition metals and three chalcogens, there are 135 two-metal and 756 five-metal possible TMDC alloys. However, just like oil and water, not all combinations will mix together to form a homogenous alloy.

“Without guidance from computations, experimentally determining which elemental combinations will give an alloy becomes a trial-and-error process that is also time consuming and expensive,” Mishra explained.

The alchemist in this case was John Cavin, a graduate student in Washington University’s Department of Physics in Arts & Sciences.

In the previous work, Cavin had shown which two transition metals can be combined, and at what temperatures, to form binary TMDCs alloys.

“The question was, ‘Could we even synthesize a TMDC alloy that had that many components?’” Cavin said. “And will they improve the reduction of CO2 into CO?”

To find out, he used quantum mechanical calculations to predict which combinations were most likely to improve the material’s ability to catalyze CO2. Then he had to go further to determine if the material would be stable, but had no tools to do so. So, he developed one himself.

“I had to develop a thermodynamic model for predicting stable high-entropy TMDC alloys from the quantum mechanical calculations,” Cavin said. These calculations were carried using considerable supercomputing resources, made available by the Extreme Science and Engineering Discovery Environment network, which is supported by the National Science Foundation.

After years of development, the resulting analysis was sent to experimental collaborators at the University of Illinois at Chicago.

“At UIC, they could synthesize the materials that we predicted would form a high-entropy TMDC alloy,” Mishra said. “Furthermore, one of them showed exceptional activity.”

They may have other uses, too. UIC synthesized three of the four different TMDC alloys and will continue to analyze them.

“These are new materials, they have never before been synthesized,” Mishra said. “They may have unanticipated properties.”

The work stems from a DMREF grant from the National Science Foundation as part of the Materials Genome Initiative launched by President Barack Obama in 2011 as a multi-agency initiative to create policy, resources and infrastructure that support U.S. institutions to discover, manufacture and deploy advanced materials efficiently and cost-effectively.