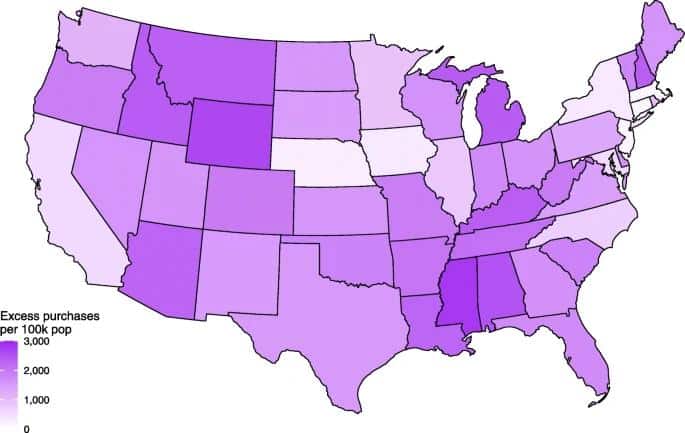 States with the most excess firearm purchases per 100,000 population are in darker purple.

Firearm purchases and firearm violence surged dramatically during the first five months of the COVID-19 pandemic, according to a new study from the UC Davis Violence Prevention Research Program (VPRP), published in Injury Epidemiology.

From March through July 2020, an estimated 4.3 million more background checks for firearm purchases occurred nationwide than would have ordinarily — an 85 percent increase. The total number of firearm purchases during this period was 9.3 million.

From April through July 2020, there was a 27% increase in interpersonal firearm injuries, which includes firearm homicides or nonfatal firearm assault injuries. This is approximately 4,075 more injuries than would be expected for that period.

Firearm violence is a significant public health problem in the United States. It is among America’s leading causes of death and disability and has profound adverse social, psychological and economic effects.

“Early in the pandemic, there were news reports about an increase in firearm purchasing. Given what we know about the risks of firearm violence associated with firearm access in general, and firearm purchasing surges specifically, we expected to see a relationship between these two during the pandemic,” said Julia Schleimer, lead author for the study and a research data analyst at VPRP.

States with the most excess firearm purchases per 100,000 population (March-July 2020)

An earlier study from VPRP had found an association between firearm purchases and violence through May 2020. The present study extended the analysis through July 2020 and examined firearm injuries from domestic violence separately from non-domestic violence.

“We know that access to firearms is a risk factor for intimate partner homicide. Last year, the increase in firearm purchasing combined with stay-at-home orders and multiple other stressors like job loss raised concern about increases in domestic violence,” Schleimer said.

As expected, the authors found states where firearm purchases went up the most showed the largest increases in firearm injuries from domestic violence. This was particularly true during April and May when social distancing was at its peak. However, they note results should be interpreted with caution since additional analyses showed that other, unmeasured variables might explain the association.

The data include the District of Columbia but not Alaska or Hawaii due to incomplete reporting. The study focuses on intentional, interpersonal firearm violence and does not include suicide or unintentional firearm injuries.

States and districts that had the highest rates of non-domestic firearm violence were the District of Columbia, Illinois, Louisiana, Missouri and Delaware.

The results of the study suggest that pre-pandemic firearm access and other factors — major disruptions to routines, grief from the pandemic, economic strain and unemployment, and civic unrest — might have been important contributing factors to the pandemic-related increase firearm violence observed through July 2020.

“The increase in purchasing has continued unabated through the first half of 2021, and crime rates have increased as well. We, and others, will continue to examine the relationship between firearm availability and violence,” said Garen Wintemute, director of the UC Davis VPRP and professor of emergency medicine at UC Davis Health.