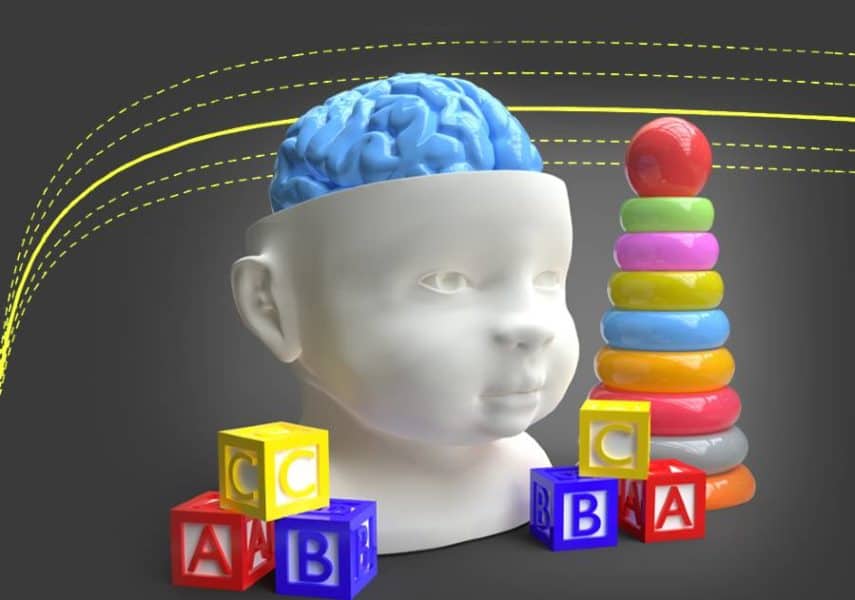 Using brain scans from children across the United States, researchers developed normalized growth charts for how healthy brains should grow during the first 18 years of life. IMAGE: ISTOCK/@HUMONIA/IMAGE COMPILATION: COLLEGE OF ENGINEERING

In the United States, nearly every pediatric doctor’s visit begins with three measurements: weight, height and head circumference. Compared to average growth charts of children across the country, established in the 1970s, a child’s numbers can confirm typical development or provide a diagnostic baseline to assess deviations from the curve. Yet, the brain, of vital importance to the child’s development, is merely hinted at in these measurements.

Head circumference may indicate a head growth issue, which could be further investigated to determine if there is an issue with brain size or extra fluid. But now, in the age of noninvasive brain scanning such as magnetic resonance imaging (MRI), could researchers develop normalized growth curve charts for the brain?

That was the question Steven Schiff, Brush Chair Professor of Engineering at Penn State, and his multi-institution research team set out to answer. They published their results today (July 9) in the Journal of Neurosurgery, Pediatrics.

“Brain size research also has a very unfortunate history, as it was often used to attempt to scientifically prove one gender or race or culture of people as better than another,” said Schiff, also a professor of engineering science and mechanics in the College of Engineering and of neurosurgery in the College of Medicine. “In this paper, we discuss the research going back about 150 years and then look at what the data of a contemporary cohort really tells us.”

The researchers analyzed 1,067 brain scans of 505 healthy children, ages 13 days to 18 years old, from the National Institutes of Health (NIH) Pediatric MRI Repository. To ensure a representative sample population across sex, race, socioeconomic status and geographic location, the MRI scans were taken sequentially over several years at hospitals and medical schools in California, Massachusetts, Missouri, Ohio, Pennsylvania and Texas. To ensure calibrated results, one person was established as a control and scanned at each site.

“The study of brain size and growth has a long and contentious history — even in the era of MRI, studies defining normal brain volume growth patterns often include small sample sizes, limited algorithm technology, incomplete coverage of the pediatric age range and other issues,” said first author Mallory R. Peterson, a Penn State student who is pursuing both a doctorate in engineering science and mechanics in the College of Engineering and a medical degree in the College of Medicine. She earned her bachelor of science degree in biomedical engineering from Penn State in 2016. “These studies have not addressed the relationship between brain growth and cerebrospinal fluid in depth, either. In this paper, we resolve both of these issues.”

The first startling finding, according to Schiff and Peterson, was the difference in brain volume between male and female children. Even after adjusting for body size, males exhibited larger overall brain volume.

“Clearly, sex-based differences do not account for intelligence — we have known that for a long time, and this does not suggest differently,” Schiff said. “The important thing here is that there is a difference in how the brains of male and female children grow. When you’re diagnosing or treating a child, we need to know when a child’s brain isn’t growing normally.”

The second finding was one of striking similarity rather than differences.

“Regardless of the sex or the size of the child, we unexpectedly found that the ratio between the size of the child’s brain and the volume of fluid within the head — cerebrospinal fluid — was universal,” Schiff said. “This fluid floats and protects the brain, serving a variety of functions as it flows through the brain. Although we have not recognized this tight normal ratio before, this relationship of fluid to brain is exactly what we try to regulate when we treat children for excess fluid in conditions of hydrocephalus.”

The researchers plan to continue studying the ratio and its potential functions, as well as underlying mechanisms, in children and across the life span.

“The apparent universal nature of the age-dependent brain-cerebrospinal fluid ratio, regardless of sex or body size, suggests that the role of this ratio offers novel ways to characterize conditions affecting the childhood brain,” Peterson said.

The researchers also settled a longstanding controversy in terms of the temporal lobe, according to Schiff. After two years of age, the left side of this brain structure — where language function is typically localized — was clearly larger than the right side throughout childhood. A portion of the temporal lobe called the hippocampus, which can be a cause of epilepsy, was larger on the right than the left as it grew during childhood.

“These normal growth curves for these critical structures often involved in epilepsy will help us determine when these structures are damaged and smaller than normal for age,” said Schiff.

This approach to normal brain growth during childhood could help researchers understand normal from excessive volume loss throughout the later lifespan, according to Schiff.

“Brain volume peaks at puberty,” Schiff said. “It then decreases as we age, and it decreases more rapidly in people with certain types of dementia. If we can better understand both brain growth and the ratio of brain to fluid at every age, we can not only improve how we diagnose clinical conditions, but also how we treat them.”