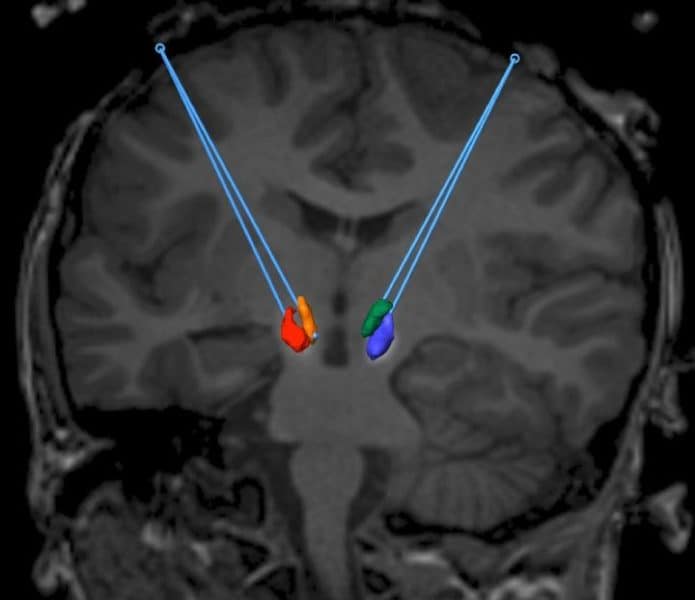 A corrected gene is placed in the midbrain of a patient with AADC deficiency. Image credit: UCSF

The trial includes seven children aged 4 to 9 born with deficiency of AADC, an enzyme involved in the synthesis of neurotransmitters, particularly dopamine, that leaves them unable to speak, feed themselves or hold up their head. Six of the children were treated at UCSF and one at Ohio State Wexner Medical Center.

Children in the study experienced improved motor function, better mood, and longer sleep, and were able to interact more fully with their parents and siblings. Oculogyric crisis, a hallmark of the disorder involving involuntary upward fixed gaze that may last for hours and may be accompanied by seizure-like episodes, ceased in all but one patient. Results appear July 12, 2021, in Nature Communications.

Just 135 children worldwide are known to be missing the AADC enzyme, with the condition affecting more people of Asian descent.

The trial borrowed from gene delivery techniques used to treat Parkinson’s disease, pioneered by senior author Krystof Bankiewicz, MD, PhD, of the UCSF Department of Neurological Surgery and the Weill Institute for Neurosciences, and of the Department of Neurological Surgery at Ohio State University. Both conditions are associated with deficiencies of AADC, which converts levodopa into dopamine, a neurotransmitter involved in movement, mood, learning and concentration.

In treating both conditions, Bankiewicz developed a viral vector containing the AADC gene. The vector is infused into the brain via a small hole in the skull, using real-time MR imaging to enable the neurosurgeon to map the target region and plan canula insertion and infusion.

“Children with primary AADC deficiency lack a functional copy of the gene, but we had presumed that their actual neuronal pathway was intact,” said co-first author Nalin Gupta, MD, PhD, of the UCSF Department of Neurological Surgery and the surgical principal investigator. “This is unlike Parkinson’s disease, where the neurons that produce dopamine undergo degeneration.”

While the Parkinson’s trial focused on the putamen, a part of the brain that plays a key role in this degeneration, Gupta said the AADC gene therapy trial targeted neurons in the substantia nigra and ventral tegmental area of the brainstem, sites that may have more therapeutic benefits.

“The approach for treating AADC deficiency is much more straightforward than it is for Parkinson’s,” said Bankiewicz. “In AADC deficiency, the wiring of the brain is normal, it’s just the neurons don’t know how to produce dopamine because they lack AADC.”

Physicians who follow patients with AADC deficiency agree that it is usually treated with limited success by managing symptoms, such as with medications used for Parkinson’s disease to increase dopamine, melatonin for sleep disturbances and benzodiazepines to relieve oculogyric crisis.

In the months that followed, many patients experienced life-changing improvements.

At the start of the study, only two of the seven children had partial head control, just one could reach or grasp and none were able to sit independently. Six of the seven were described as irritable and all but one had insomnia. Their baseline motor skill scores were all within the severe impairment range. Symptoms eased after surgery, starting with oculogyric crisis.

“Remarkably, these episodes were the first to disappear and they never returned,” said Bankiewicz. “In the months that followed, many patients experienced life-changing improvements. Not only did they begin laughing and have improved mood, but some were able to start speaking and even walking.”

All patients experienced recognizable gains in motor function, manifested by increased tone and better head and trunk control, and purposeful limb movements. Head control was attained by six of the seven children by month 12 and four were able to sit independently by this time. Also, at 12 months, three patients could reach and grasp and two were able to walk with trunk support. Two-and-a-half years after surgery, one patient started to take independent steps. One patient was able to speak using a vocabulary of about 50 single words by 12 months and a second was able to communicate with an assistive device between 12 to 18 months after gene delivery.

Significant improvements were reported by parents and caregivers in sleep and mood, as well as in feeding difficulties, such as vomiting, and upper airway obstruction due to profuse mucus secretions and congestion. The procedure was well tolerated without adverse short-term or long-term effects, but one child died at seven months after surgery. The patient appeared to be in good health and the cause of death is “most likely attributable to the underlying primary disease,” the researchers stated.

The study follows the Parkinson’s trial, which also showed positive results with increased durations of well-controlled symptoms. The Bankiewicz team will start two new gene therapy trials, using the same surgical techniques and viral vector, for early Alzheimer’s disease and for multiple system atrophy, a rare neurodegenerative disorder. Both trials will run at Ohio State University and will start next month.