This dinosaur, called Bonapartesaurus rionegrensis, was discovered in Argentinean Patagonia in the 1980s, and the first analyses of its fossils indicated an ailment of the foot, possibly a fracture, as the Argentinean palaeontologist Jaime Powell pointed out at the time. The study of this animal then came to a standstill until 2016, when Powell invited another team of scientists to resume the research.

“In addition to the ailment of the foot, there were other possible fractures in several neural spines of the vertebrae of the tail,” as Penélope Cruzado-Caballero, the lead author of the study, now published in the journal Cretaceous Research, and a scientist at the Research Institute of Palaeobiology and Geology of CONICET and the National University of Río Negro (Argentina), as well as a professor at the University of La Laguna (Tenerife, Spain), has told SINC.

The researchers decided to analyse them all to see this hadrosaur, also known as duck-billed dinosaur, “during its lifetime” and to see how it was able to interact with the environment, with its fellows, and with predators while suffering from these problems.

Scientists were particularly surprised by the condition of the foot. “We were struck by the large overgrowth of bone that gave it a cauliflower-like appearance and covered almost the entire metatarsal,” the researcher points out. When studying the histology and CT scans of the fossil, the team did not find a fracture. Instead, the indicators showed a reduction in bone density and several areas where cortical tissue had been destroyed.

“We were probably looking at a cancer or a neoplasm, such as an osteosarcoma,” specifies Cruzado-Caballero. The presence of diseases such as tumours confirms that they already existed at a very early age and among a very diverse group of animals.

“Despite the large development of the cancer, it did not significantly affect the muscle insertion zone, so we cannot be sure that the lesion affected its locomotion,” says the palaeontologist. The study has allowed us to determine that the tumour did not spread to other bones – since this ornithopod preserved almost half of its skeleton -, “so, although it severely affected the metatarsus, it did not cause its death,” she adds.

In addition to the foot tumour, other pathologies were identified in the neural spines of two vertebrae in Bonapartesaurus rionegrensis’s tail. According to the scientists, one of the vertebrae had a displaced fracture that had almost healed. “It was probably related to an injury resulting from a strong blow that caused the bone to be displaced and to heal in this manner, giving the spine a curved appearance,” Cruzado-Caballero stresses.

In addition to the foot tumour, other pathologies were identified in the neural spines of two vertebrae in Bonapartesaurus rionegrensis’s tail

The other vertebra had an almost completely healed fracture also produced by a stress event (it is not known if it was due to impact), which did not lead to the displacement of the bone. Although the spine maintains its straight shape, the researchers observed a swelling that formed a callus on the bone as it healed.

“These fractures, especially in the case of the displaced fracture, must have been associated with infections following the rupture of the muscles surrounding the bone,” says the researcher, who considers that they must have been painful not only because of the blow, but also because of the infections that could have impeded the mobility of the tail and caused this specimen a great deal of discomfort when it moved.

However, despite the severity of the ailments, the death of Bonapartesaurus rionegrensis did not follow immediately after its injuries, the authors point out. “But we cannot quantify how long it lived afterwards, which means that it could have lived for months or years. Nor can we confirm that these injuries were the final cause of its death,” comments the scientist.

This hadrosaur, although badly injured, therefore managed to survive and continued to interact with its fellows, despite the initial pain caused by fractures and infections. These could have been caused by falling, hitting an object or another animal to defend itself from predators, or even by being trampled on the tail by another hadrosaur. 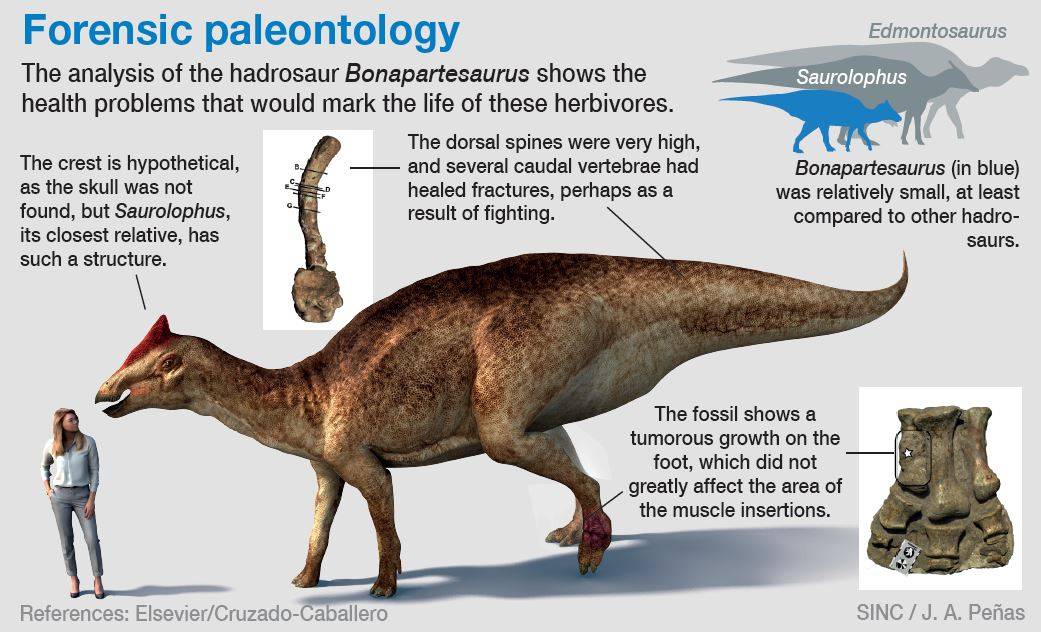