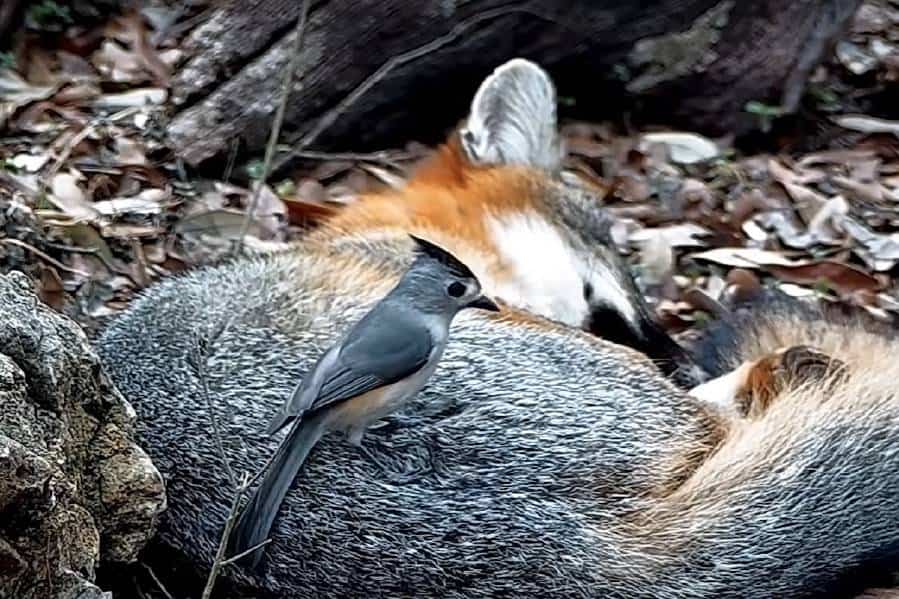 Screenshot from a video of a black-crested titmouse stealing fur from a sleeping fox, from the YouTube channel Texas Backyard Wildlife.

Dozens of online videos document an unusual behavior among tufted titmice and their closest bird kin. A bird will land on an unsuspecting mammal and, cautiously and stealthily, pluck out some of its hair.

A new paper in the journal Ecology documents this phenomenon, which the authors call “kleptotrichy,” from the Greek roots for “theft” and “hair.” The authors found only a few descriptions of the behavior in the scientific literature but came up with dozens more examples in online videos posted by birders and other bird enthusiasts. In almost all the videorecorded cases, the thief is a titmouse plucking hair from a cat, dog, human, raccoon or, in one case, porcupine.

Many species of titmice, chickadees and tits – all members of the family Paridae – are known to use hair or fur to line their nests, said Mark Hauber, a professor of evolution, ecology and behavior at the University of Illinois Urbana-Champaign who led the write-up with postdoctoral researcher Henry Pollock. The hair’s role in the nest is still debated, although it is more commonly used by birds nesting in temperate climates, so maintaining warmth in the nest is thought to be one advantage.

The impetus for the study came from a chance sighting. Study co-author U. of I. natural resources and environmental sciences professor Jeffrey Brawn first observed the behavior with Pollock while on a spring bird count in central Illinois.

Scientists once assumed that birds with hair in their nests had collected it from the carcasses of dead mammals or found hair that had been shed into the environment, Brawn said.

“But the titmouse I saw was plucking hair from a live animal,” he said. “This was from a live raccoon with claws and teeth. And the raccoon didn’t seem to mind because it didn’t even wake up.”

A search of published research turned up just nine studies that documented 11 instances of the behavior, but a YouTube search yielded many more cases, Hauber said. Sometimes the target animals were sleeping, and sometimes they were awake.

“We know, of course, that birds use a variety of materials to line their nests,” Hauber said. “But why are these birds risking their lives to approach these mammals?”

The behavior suggests that the benefit of lining its nest with hair outweighs the danger to the bird, he said.

It may be that the birds simply need the hair to insulate their nests, but the presence of mammal hair – and the associated odor of the mammal – could also deter nest predators like snakes or other birds, the researchers said.

“There’s a local species called the great crested flycatcher, which, like the titmouse, is a cavity nester, that actually puts shed snakeskins into its nest, possibly to deter predators,” Brawn said.

“There are finches in Africa that put mammalian fecal material on top of their enclosed nests, presumably to confuse and thus keep predators away,” Hauber said.

The hair also may repel nest and nestling parasites, which are a common threat to chick survival, especially in cavity nests like those of titmice, he said.

Regardless of the purpose of the behavior, the new paper is the first to document so many examples of hair-plucking by birds in a single report. In addition to citing nine papers about the phenomenon, it also links to dozens of online videos. Collectively, the videos show titmice – and in one case, a black-capped chickadee – plucking hair from 47 humans, 45 dogs, three cats, three raccoons and a porcupine.

“Unexpected interactions such as these remind us that animals exhibit all types of interesting and often overlooked behaviors and highlight the importance of careful natural history observations to shed light on the intricacies of ecological communities,” Pollock said.

The paper “What the pluck? Theft of mammal hair by birds is an overlooked but common behavior with fitness implications” is available online and from the U. of I. News Bureau.