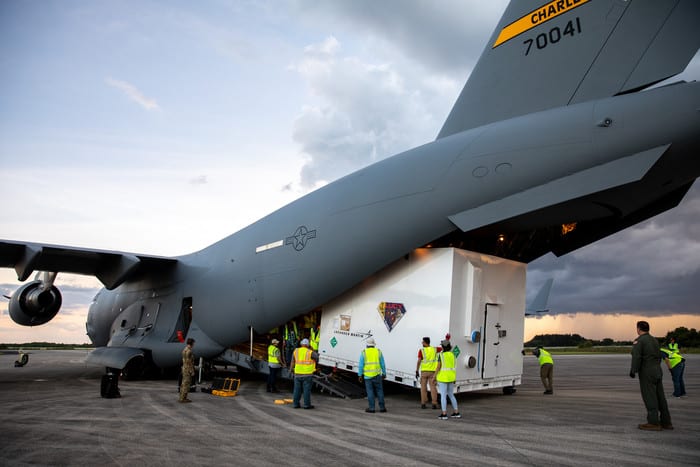 NASA's Lucy spacecraft arrives by cargo plane and is unloaded on the runway of the Launch and Landing Facility at Kennedy Space Center in Florida on July 30, 2021.

NASA’s first spacecraft to explore the Trojan asteroids arrived Friday, July 30, at the agency’s Kennedy Space Center (KSC) in Florida. It is now in a cleanroom at nearby Astrotech, ready to begin final preparations for its October launch.

The mission has a 23-day launch period beginning on October 16. Lucy will undergo final testing and fueling prior to being moved to its launch pad at Cape Canaveral Space Force Station.

“The coronavirus pandemic required us to re-engineer the way we conducted assembly, integration, and testing,” said Donya Douglas-Bradshaw, Lucy project manager at NASA’s Goddard Space Flight Center in Greenbelt, Maryland. “When I think about where the project was a year ago and the challenges we faced, I couldn’t be prouder of the entire team. The fact that the spacecraft is safely at KSC is a testament to the sacrifice and dedication shown by every member of the team and their families.”

The Lucy mission is the first space mission to explore a diverse population of small bodies known as the Jupiter Trojan asteroids. These small bodies are remnants of our early solar system, now trapped in stable orbits associated with the giant planet Jupiter, forming two “swarms” that lead in front of and trail behind Jupiter in its path around the Sun. These orbits are clustered around stable points of gravitational equilibrium known as Lagrange Points.

Over its twelve-year primary mission, Lucy will explore a record-breaking number of asteroids, flying by one main belt asteroid and seven Trojan asteroids. Lucy also incorporates three Earth-gravity assists to reach the Trojan swarms and accomplish these targeted encounters.

The spacecraft was transported from Buckley Space Force Base in Aurora, Colorado, aboard a U.S. Air Force C-17 cargo plane. Lockheed Martin Space designed and built the spacecraft in its Littleton, Colorado, facility.

“It takes a lot of coordination and careful planning to get this spacecraft to its launch site, and I’m very proud of the team who worked so tirelessly through a global pandemic to get us to this moment,” said Rich Lipe, Lockheed Martin Lucy program manager.

Over the weekend, the team transferred the spacecraft from its shipping container into the Astrotech cleanroom and performed post-ship inspections, confirming that Lucy arrived in good condition. The spacecraft is now ready to begin its final round of testing and pre-launch checks, which include software tests, instrument and powered functional tests, propulsion propellent load tests, telecommunication tests, and spacecraft self-tests.

“It is hard to believe that we are finally here after over seven years of hard work,” says Hal Levison, Lucy’s principal investigator from Southwest Research Institute in Boulder, Colorado. “We would not have made it without an extremely talented and dedicated team. It’s now time to get Lucy into the sky so that it can deliver its revolutionary science about the origin of our planetary system.”