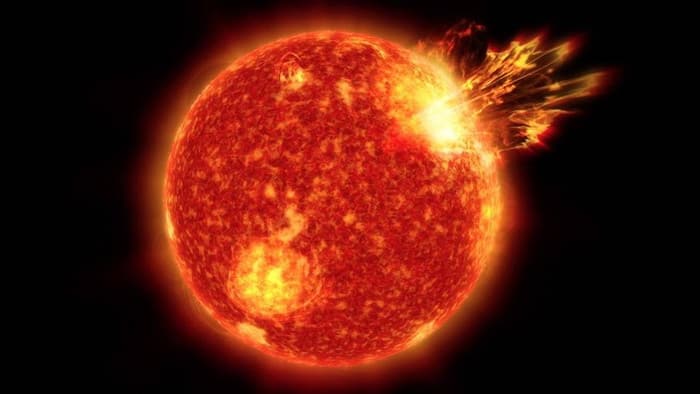 Illustration of what the Sun may have been like 4 billion years ago, around the time life developed on Earth.

New research led by NASA provides a closer look at a nearby star thought to resemble our young Sun. The work allows scientists to better understand what our Sun may have been like when it was young, and how it may have shaped the atmosphere of our planet and the development of life on Earth.

Many people dream of meeting with a younger version of themselves to exchange advice, identify the origins of their defining traits, and share hopes for the future. At 4.65 billion years old, our Sun is a middle-aged star. Scientists are often curious to learn exactly what properties enabled our Sun, in its younger years, to support life on nearby Earth.

Without a time machine to transport scientists back billions of years, retracing our star’s early activity may seem an impossible feat. Luckily, in the Milky Way galaxy – the glimmering, spiraling segment of the universe where our solar system is located – there are more than 100 billion stars. One in ten share characteristics with our Sun, and many are in the early stages of development.

“Imagine I want to reproduce a baby picture of an adult when they were one or two years old, and all of their pictures were erased or lost. I would look at a photo of them now, and their close relatives’ photos from around that age, and from there, reconstruct their baby photos,” said Vladimir Airapetian, senior astrophysicist in the Heliophysics Division at NASA’s Goddard Space Flight Center in Greenbelt, Maryland, and first author on the new study. “That’s the sort of process we are following here – looking at characteristics of a young star similar to ours, to better understand what our own star was like in its youth, and what allowed it to foster life on one of its nearby planets.”

Kappa 1 Ceti is one such solar analogue. The star is located about 30 light-years away (in space terms, that’s like a neighbor who lives on the next street over) and is estimated to be between 600 to 750 million years old, around the same age our Sun was when life developed on Earth. It also has a similar mass and surface temperature to our Sun, said the study’s second author, Meng Jin, a heliophysicist with the SETI Institute and the Lockheed Martin Solar and Astrophysics Laboratory in California. All of those factors make Kappa 1 Ceti a “twin” of our young Sun at the time when life arose on Earth, and an important target for study.

Airapetian, Jin, and several colleagues have adapted an existing solar model to predict some of Kappa 1 Ceti’s most important, yet difficult to measure, characteristics. The model relies on data input from a variety of space missions including the NASA/ESA Hubble Space Telescope, NASA’s Transiting Exoplanet Survey Satellite and NICER missions, and ESA’s XMM-Newton. The team published their study today in The Astrophysical Journal.

Like human toddlers, toddler stars are known for their high bursts of energy and activity. For stars, one way this pent-up energy is released is in the form of a stellar wind.

Stellar winds, like stars themselves, are mostly made up of a superhot gas known as plasma, created when particles in a gas have split into positively charged ions and negatively charged electrons. The most energetic plasma, with the help of a star’s magnetic field, can shoot off away from the outermost and hottest part of a star’s atmosphere, the corona, in an eruption, or stream more steadily toward nearby planets as stellar wind. “Stellar wind is continuously flowing out from a star toward its nearby planets, influencing those planets’ environments,” Jin said.

Younger stars tend to generate hotter, more vigorous stellar winds and more powerful plasma eruptions than older stars do. Such outbursts can affect the atmosphere and chemistry of planets nearby, and possibly even catalyze the development of organic material – the building blocks for life – on those planets.

Stellar wind can have a significant impact on planets at any stage of life. But the strong, highly dense stellar winds of young stars can compress the protective magnetic shields of surrounding planets, making them even more susceptible to the effects of the charged particles.

Our Sun is a perfect example. Compared to now, in its toddlerhood, our Sun likely rotated three times faster, had a stronger magnetic field, and shot out more intense high-energy radiation and particles. These days, for lucky spectators, the impact of these particles is sometimes visible near the planet’s poles as aurora, or the Northern and Southern Lights. Airapetian says 4 billion years ago, considering the impact of our Sun’s wind at that time, these tremendous lights were likely often visible from many more places around the globe.

That high level of activity in our Sun’s nascence may have pushed back Earth’s protective magnetosphere, and provided the planet – not close enough to be torched like Venus, nor distant enough to be neglected like Mars – with the right atmospheric chemistry for the formation of biological molecules.

Similar processes could be unfolding in stellar systems across our galaxy and universe.

“It’s my dream to find a rocky exoplanet in the stage that our planet was in more than 4 billion years ago, being shaped by its young, active star and nearly ready to host life,” Airapetian said. “Understanding what our Sun was like just as life was beginning to develop on Earth will help us to refine our search for stars with exoplanets that may eventually host life.”

Though solar analogues can help solve one of the challenges of peeking into the Sun’s past, time isn’t the only complicating factor in studying our young Sun. There’s also distance.

We have instruments capable of accurately measuring the stellar wind from our own Sun, called the solar wind. However, it’s not yet possible to directly observe the stellar wind of other stars in our galaxy, like Kappa 1 Ceti, because they are too far away.

When scientists wish to study an event or phenomenon that they cannot directly observe, scientific modeling can help fill in the gaps. Models are representations or predictions of an object of study, built on existing scientific data. While scientists have previously modeled the stellar wind from this star, Airapetian said, they used more simplified assumptions.

“Every model needs input to get output,” Airapetian said. “To get useful, accurate output, the input needs to be solid data, ideally from multiple sources across time. We have all that data from Kappa 1 Ceti, but we really synthesized it in this predictive model to move past previous purely observational studies of the star.”

Airapetian likens his team’s model to a doctor’s report. To get a full picture of how a patient is doing, a doctor is likely to talk to the patient, gather markers like heart rate and temperature, and if needed, conduct several more specialized tests, like a blood test or ultrasound. They are likely to formulate an accurate assessment of patient well-being with a combination of these metrics, not just one.

Similarly, by using many pieces of information about Kappa 1 Ceti gathered from different space missions, scientists are better able to predict its corona and the stellar wind. Because stellar wind can affect a nearby planet’s magnetic shield, it plays an important role in habitability. The team is also working on another project, looking more closely at the particles that may have emerged from early solar flares, as well as prebiotic chemistry on Earth.

Our Sun’s Past, Written in the Stars

The researchers hope to use their model to map the environments of other Sun-like stars at various life stages.

Specifically, they have eyes on the infant star EK Dra – 111 light-years away and only 100 million years old – which is likely rotating three times faster and shooting off more flares and plasma than Kappa 1 Ceti. Documenting how these similar stars of various ages differ from one another will help characterize the typical trajectory of a star’s life.

Their work, Airapetian said, is all about “looking at our own Sun, its past and its possible future, through the lens of other stars.”

To learn more about our Sun’s stormy youth, watch this video and see how energy from our young Sun — 4 billion years ago — aided in creating molecules in Earth’s atmosphere, allowing it to warm up enough to incubate life.

The basis for the new model of Kappa 1 Ceti by Airapetian, Jin, and colleagues is the Alfvén Wave Solar Model, which is within the Space Weather Modeling Framework developed by the University of Michigan. The model works by inputting known information about a star, including its magnetic field and ultraviolet emission line data, to predict stellar wind activity. When the model has been tested on our Sun, it has been validated and checked against observed data to verify that its predictions are accurate.

“It’s capable of modeling our star’s winds and corona with high fidelity,” Jin said. “And it’s a model we can use on other stars, too, to predict their stellar wind and thereby investigate habitability. That’s what we did here.”

Previous studies have drawn on data gathered by the Transiting Exoplanet Survey Satellite (TESS) and Hubble Space Telescope (HST) to identify Kappa 1 Ceti as a young solar proxy, and to gather the necessary inputs for the model, such as magnetic field and ultraviolet emission line data.