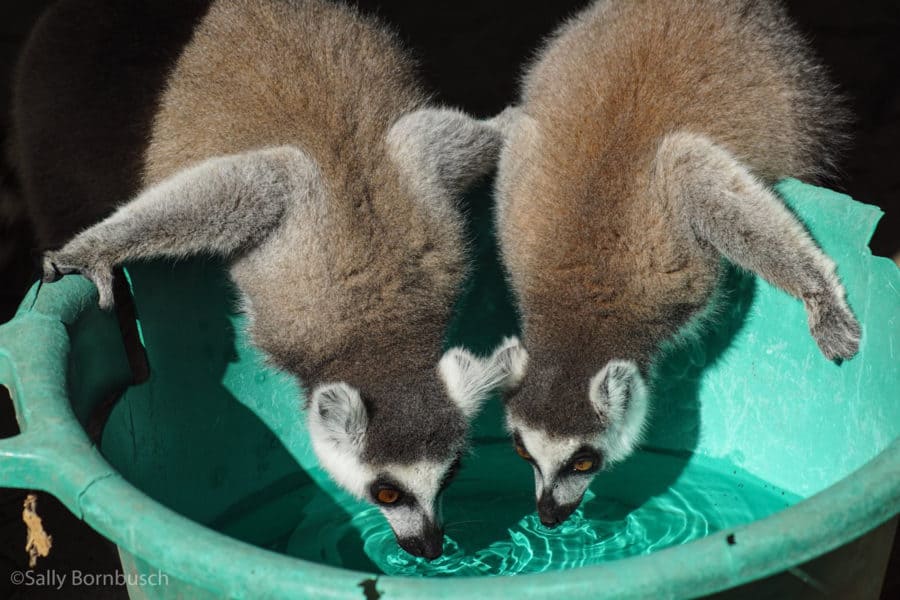 Bacterial genes for antibiotic resistance have been found in the guts of captive and wild lemurs in Madagascar and the U.S. The closer the animals’ contact with humans, the more resistant bacteria they harbored. (Sally Bornbusch)

Antibiotic resistance, which the CDC calls one of the world’s most urgent public health crises, is now being found in the guts of lemurs, our distant primate cousins.

The research team, graduate student Sally Bornbusch and Christine Drea, Professor of Evolutionary Anthropology at Duke University, sampled the dung of ring-tailed lemurs and sequenced the genes of all microbes found there, looking for genetic markers of antibiotic resistance.

Some of this is likely due to good veterinary care: lemurs living in research facilities are treated for infections when needed, and so have greater direct exposure to antibiotics than their wild cousins.

Keeping a lemur as a pet is illegal in Madagascar, so those who keep lemurs are unlikely to take these animals to a veterinarian and risk facing legal consequences. These pet lemurs are therefore acquiring the antibiotic resistant microbes simply by sharing their environment with humans and domestic animals.

Ring-tailed lemurs are omnivores and generalists who will eat dirt, excrement, and whatever they can get hold of. In a domestic household, they are often in constant contact with humans, perched on their owner’s shoulders, or in the arms of tourists willing to pay for a photo (a practice that is harmful to both humans and animals).

Bornbusch said that this physical and social environment is apparently contributing to pet lemurs’ antibiotic resistance.

“Microbes are like an overlaying blanket on everything. They’re not only in our guts, but also on our skin, our furniture, and in our food and water,” Bornbusch said. “They’re everywhere, all the time, and they are easily transmitted between environments.”

Among wild lemurs, antibiotic resistance varied along a gradient of human activity. Animals from areas impacted by cattle grazing, farming, or tourism harbored more antibiotic resistant microbes than those from more pristine environments, but still far less than lemurs living in close proximity to humans.

“Antibiotic treatment is clearly not the only mechanism leading to a higher abundance of resistance genes in these animals,” Bornbusch said.

In fact, even among lemurs housed at research facilities, those with no previous antibiotic treatment harbored similar numbers of antibiotic resistance genes compared to lemurs at the same facility that had been treated many times for infections.

In a natural scenario, this process rarely poses problems. But things started to go awry when humans harnessed the power of naturally occurring antibiotics and released man-made antibiotics to the public.

“Humans came along, developed antibiotics, spread them all around us, and propagated these resistance genes into natural environments and into the microbiomes of wildlife,”  Bornbusch said. Though grim, these results can have a positive impact on conservation and wildlife management practices.

“Even if these results are slightly scary, they help us use microbiome science to hone veterinary practices and conservation activities,” Bornbusch said. She also said that more research is needed to better understand the impact of these resistance genes on wildlife.

“Right now, we know that these resistance genes are out there, but we don’t know whether they are truly harmful to lemurs,” said Bornbusch. “These results give us a stepping-stone for research on the impact of these resistant microbes on wildlife and their environment.”