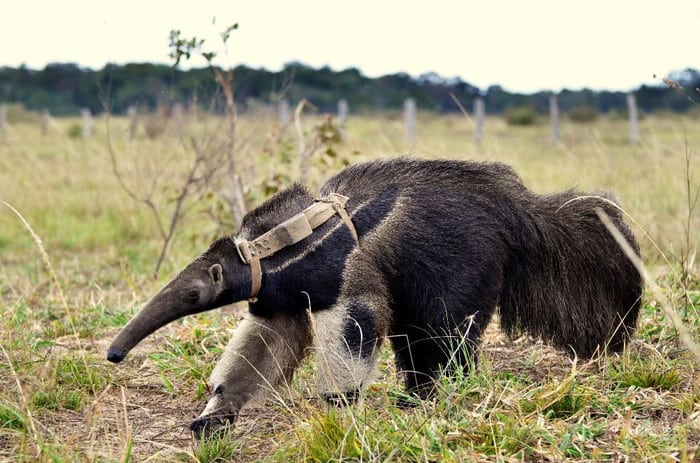 Giant anteaters living in less forested habitats make use of larger home ranges, according to a study by Aline Giroux at the Federal University of Mato Grosso do Sul and colleagues, publishing August 18 in the open-access journal PLOS ONE. This behavior may allow them to incorporate forest patches into their territory, the authors say.

Giant anteaters (Myrmecophaga tridactyla) are found across Central and South America in savannah habitats made up of a mosaic of forests, grasslands, and wetlands. Their bodies are relatively poor at thermoregulation, so they rely on forest patches — which are thermal shelters — to help regulate body temperature. To understand how these gentle giants make use of their space, the researchers caught, measured, and GPS-tagged 19 wild giant anteaters in Santa Barbara Ecological Station in São Paulo state and Baía das Pedras Ranch in Mato Grosso do Sul state in Brazil.

The researchers analysed the effects of sex, body size, and forest cover on movement and home range size, and found that males tended to range across a larger area and use the space more intensively than females of a similar body size, possibly to increase their chances of finding a mate. In habitats with a lower proportion of tree cover, both male and female anteaters had larger home ranges, which may allow them to access forest fragments as a refuge from extreme temperatures.

As climate change brings increasingly frequent and severe extreme weather events, the milder microclimate of forest patches is likely to become more important for these vulnerable mammals, putting the species at increasing risk from deforestation. The authors highlight the role of forests as an important thermal resource influencing how much space giant anteaters need. They also suggest that conservation management efforts should focus on protecting forest fragments within anteaters’ home ranges to help them behaviorally thermoregulate.

The authors add: “The authors highlight the role of forests as an important thermal resource driving how much space giant anteaters need.”