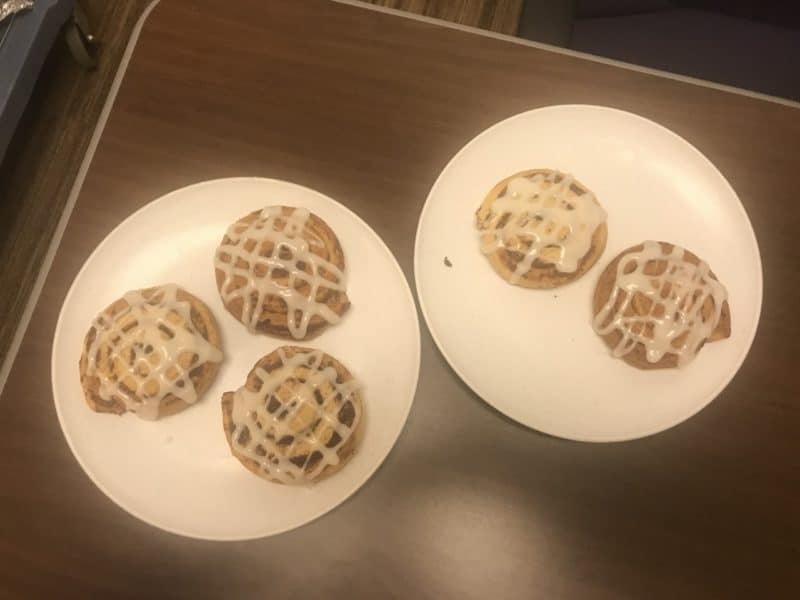 The team took a scientific approach to baking, using a scale to measure the exact amount of icing to place on each cinnamon roll

Walking past a corner bakery, you may find yourself drawn in by the fresh smell of sweets wafting from the front door. You’re not alone: The knowledge that humans make decisions based on their nose has led major brands like Cinnabon and Panera Bread to pump the scents of baked goods into their restaurants, leading to big spikes in sales.

But according to a new study, the food you ate just before your walk past the bakery may impact your likelihood of stopping in for a sweet treat – and not just because you’re full.

Scientists at Northwestern University found that people became less sensitive to food odors based on the meal they had eaten just before. So, if you were snacking on baked goods from a coworker before your walk, for example, you may be less likely to stop into that sweet-smelling bakery.

The study, “Olfactory perceptual decision-making is biased by motivational state,” will be published August 26 in the journal PLOS Biology.

Smell regulates what we eat, and vice versa

The study found that participants who had just eaten a meal of either cinnamon buns or pizza were less likely to perceive “meal-matched” odors, but not non-matched odors. The findings were then corroborated with brain scans that showed brain activity in parts of the brain that process odors was altered in a similar way.

Feedback between food intake and the olfactory system may have an evolutionary benefit, said senior and corresponding study author Thorsten Kahnt, an assistant professor of neurology and psychiatry and behavioral sciences at Northwestern University Feinberg School of Medicine.

Kahnt said while we don’t see the hunter-gatherer adaptation come out in day-to-day decision-making, the connection between our nose, what we seek out and what we can detect with our nose may still be very important. If the nose isn’t working right, for example, the feedback loop may be disrupted, leading to problems with disordered eating and obesity. There may even be links to disrupted sleep, another tie to the olfactory system the Kahnt lab is researching.

Using brain imaging, behavioral testing and non-invasive brain stimulation, the Kahnt lab studies how the sense of smell guides learning and appetite behavior, particularly as it pertains to psychiatric conditions like obesity, addiction and dementia. In a past study, the team found the brain’s response to smell is altered in sleep-deprived participants, and next wanted to know whether and how food intake changes our ability to perceive food smells.

According to Laura Shanahan, a postdoctoral fellow in the Kahnt lab and the first and co-corresponding author of the study, there’s very little work on how odor perception changes due to different factors. “There’s some research on odor pleasantness”, Shanahan said, “but our work focuses in on how sensitive you are to these odors in different states.”

Pizza and pine; cinnamon and cedar

To conduct the study, the team developed a novel task in which participants were presented with a smell that was a mixture between a food and a non-food odor (either “pizza and pine” or “cinnamon bun and cedar” – odors that “pair well” and are distinct from each other). The ratio of food and non-food odor varied in each mixture, from pure food to pure non-food. After a mixture was presented, participants were asked whether the food or the non-food odor was dominant.

Participants completed the task twice inside an MRI scanner: First, when they were hungry, then, after they’d eaten a meal that matched one of the two odors.

“In parallel with the first part of the experiment running in the MRI scanner, I was preparing the meal in another room,” Shanahan said. “We wanted everything fresh and ready and warm because we wanted the participant to eat as much as they could until they were very full.”

The team then computed how much food odor was required in the mixture in each session for the participant to perceive the food odor as dominant. The team found when participants were hungry, they needed a lower percentage of food odor in a mixture to perceive it as dominant – for example, a hungry participant may require a 50% cinnamon bun to cedar mixture when hungry, but 80% when full of cinnamon buns.

Through brain imaging, the team provided further evidence for the hypothesis. Brain scans from the MRI demonstrated a parallel change occurring in the part of the brain that processes odors after a meal. The brain’s response to a meal-matched odor was less “food-like” than responses to a non-matched meal odor.

Findings from this study will allow the Kahnt lab to take on more complex projects. Kahnt said with a better understanding of the feedback loop between smell and food intake, he’s hoping to take the project full circle back to sleep deprivation to see if lack of sleep may impair the loop in some way. He added that with brain imaging, there are more questions about how the adaptation may impact sensory and decision-making circuits in the brain.

“After the meal, the olfactory cortex didn’t represent meal-matched food odors as much as food anymore, so the adaptation seems to be happening relatively early on in processing,” Kahnt said. “We’re following up on how that information is changed and how the altered information is used by the rest of the brain to make decisions about food intake.”