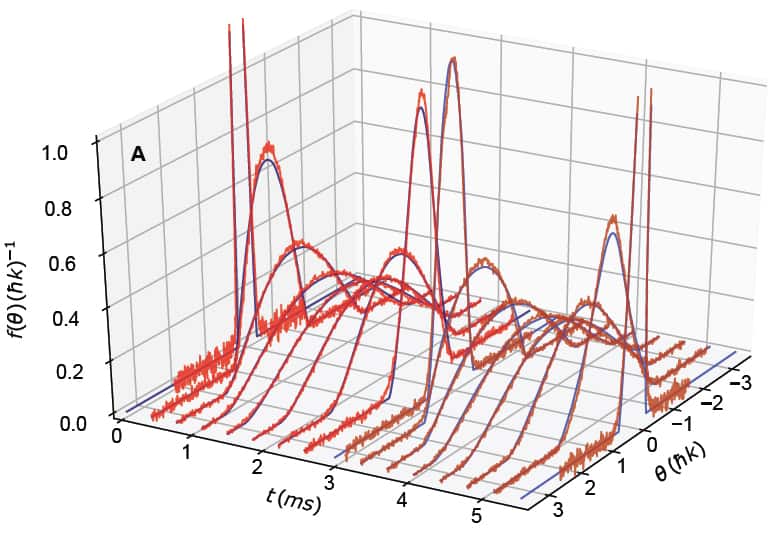 New experiments using trapped one-dimensional gases — atoms cooled to the coldest temperatures in the universe and confined so that they can only move in a line — fit with the predictions of the recently developed theory of “generalized hydrodynamics.” Quantum mechanics is necessary to describe the novel properties of these gases. Achieving a better understanding of how such systems with many particles evolve in time is a frontier of quantum physics. The result could greatly simplify the study of quantum systems that have been excited out of equilibrium. Besides its fundamental importance, it could eventually inform the development of quantum-based technologies, which include quantum computers and simulators, quantum communication, and quantum sensors. A paper describing the experiments by a team led by Penn State physicists appears Sept. 3 in the journal Science.

Even within classical physics, where the additional complexities of quantum mechanics can be ignored, it is impossible to simulate the motion of all the atoms in a moving fluid. To approximate these systems of particles, physicists use hydrodynamics descriptions.

“The basic idea behind hydrodynamics is to forget about the atoms and consider the fluid as a continuum,” said Marcos Rigol, professor of physics at Penn State and one of the leaders of the research team. “To simulate the fluid, one ends up writing coupled equations that result from imposing a few constraints, such as the conservation of mass and energy. These are the same types of equations solved, for example, to simulate how air flows when you open windows to improve ventilation in a room.”

Matter becomes more complicated if quantum mechanics is involved, as is the case when one wants to simulate quantum many-body systems that are out of equilibrium.

“Quantum many-body systems — which are composed of many interacting particles, such as atoms — are at the heart of atomic, nuclear, and particle physics,” said David Weiss, distinguished professor of physics at Penn State and one of the leaders of the research team. “It used to be that except in extreme limits you couldn’t do a calculation to describe out-of-equilibrium, quantum many-body systems. That recently changed.”

The change was motivated by the development of a theoretical framework known as generalized hydrodynamics.

“The problem with those quantum many-body systems in one dimension is that they have so many constraints on their motion that regular hydrodynamics descriptions cannot be used,” said Rigol. “Generalized hydrodynamics was developed to keep track of all those constraints.”

Until now, generalized hydrodynamics had only previously been experimentally tested under conditions where the strength of interactions among particles was weak.

“We set out to test the theory further, by looking at the dynamics of one dimensional gases with a wide range of interaction strengths,” said Weiss. “The experiments are extremely well controlled, so the results can be precisely compared to the predictions of this theory.

The research team uses one dimensional gases of interacting atoms that are initially confined in a very shallow trap in equilibrium. They then very suddenly increase the depth of the trap by 100 times, which forces the particles to collapse into the center of the trap, causing their collective properties to change. Throughout the collapse, the team precisely measures their properties, which they can then compare to the predictions of generalized hydrodynamics.

“Our measurements matched the prediction of theory across dozens of trap oscillations,” said Weiss. “There currently aren’t other ways to study out-of-equilibrium quantum systems for long periods of time with reasonable accuracy, especially with a lot of particles. Generalized hydrodynamics allow us to do this for some systems like the one we tested, but how generally applicable it is still needs to be determined.”

In addition to Weiss and Rigol, the research team includes Neel Malvania, Yicheng Zhang, and Yuan Le at Penn State; and Jerome Dubail at Université de Lorraine in France. The research was funded by the U.S. National Science Foundation and the U.S. Army Research Office.