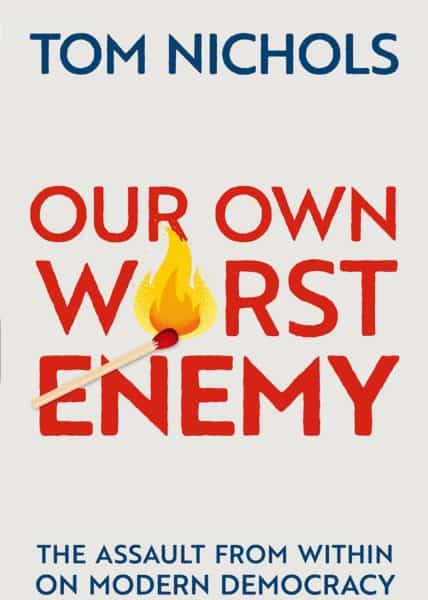 One of the biggest threats to American democracy right now isn’t nuclear war or terrorism, but the growing narcissism and nihilism of the public, says Tom Nichols.

Nichols, an instructor at Harvard Extension School and the U.S. Naval War College, recently released “Our Own Worst Enemy.” The book details how a lack of civic virtue combined with Americans’ expectation that the government take care of their needs now pose an existential threat to our system of government.

Nichols borrows a movie scenario to illustrate: In “Three Days of the Condor,” two CIA agents tensely discuss the covert bust of a nefarious plan to invade the Middle East for its oil. When a senior official, Higgins, says it was actually a good plan, his callousness stuns a low-level analyst. But Higgins says that in desperate times, people don’t care how resources like oil and food are secured for them: “They’ll just want us to get it for them.”

The result, Nichols says: “You will have a technocracy that just doesn’t ask us our views anymore because they can’t get an answer out of us. And I always say, this will not be a takeover. Other people will govern us by default because we don’t care.”

Harvard Extension School sat down with Nichols to talk about the book and the current state of democracy.

EXTENSION SCHOOL: Give me a brief description of your book.

The answer I came to is that there’s no way to track the decline of democracy with anything but large cultural changes, which have been in motion for 50 years. But I really thought the strongest relationship was the growth of an affluent, narcissistic society and the decline of civic and democratic virtue.

We are expecting too much from democracy without really having to participate in it. We’ve become very entitled. We’ve become very self-centered. And we think that every inconvenience is a failure of democracy. We think that even the major things in our lives are a failure of democracy — if you lose your job, if a factory closes, if your health goes bad, somehow, everything has failed you.

The idea that we are resilient adults who have agency and control our own destinies has become alien to multiple generations of Americans whose relationship with democracy is almost childlike. And when democracy doesn’t do everything we want it to do, we declare the whole thing a failure.

That wasn’t good enough for me, so I wrote about why I think that’s happening and why we need to recover some sense of civic virtue.

EXTENSION SCHOOL: Do you see this as a follow-up to your last book, “The Death of Expertise”?

EXTENSION SCHOOL: In a video of you touring your hometown, you said, “Democracy has to do a better job of taking care of the people who are suffering.” How does that happen?

We have become so wrapped up in our own narcissistic beefs that we will vote against our own interests and against the well-being of ourselves and our neighbors purely as some kind of tribal exercise. This has been going on for 50 years. And this is not limited to one party. We have become surly villagers — me, my family, my little plot of land, and everybody else can go to hell.

Well, that’s not America. America prospered, especially in the 20th century, on the exact opposite of that. We created civic associations. I’m an Elk. We contribute to scholarship funds and flag drives. Yet people now won’t do that and then they say, “Why is society so mean and heartless and awful? And why is democracy so callous and ruthless?” Well, we never look at home for those answers.

EXTENSION SCHOOL: You’re teaching a class this spring, “Popular Culture and U.S. Foreign Policy During the Cold War.” Do you see any parallels between what happened then and what’s happening now?

NICHOLS: The existence of an alternative to liberal democracy sobered everybody up at various times during the Cold War. You didn’t get up every morning and think that Soviet paratroopers were going to wade ashore in Boston Harbor. But most people knew and understood that there was a giant, nuclear superpower that was our peer competitor that wished us harm, and that their model of government was the opposite of our model of government.

People don’t have that anymore. They think the world is basically just a big chaotic marketplace. They look at China and they see glittering cities and trading partners, and it’s basically like us. The Soviet experience was a stark difference. It was easy to draw black-and-white differences between our system and the Soviet system.

Without that sense that liberal democracy is unique and precious and worth defending, we’ve become lazy about it. Nobody has any real sense of danger from any other system in the world. Some of this, too, is 20 years of focusing on terrorists who are a threat to our personal safety in random ways but not a threat to our entire way of life or our government. Terrorists are not going to pull down the American flag or nuke Los Angeles.

EXTENSION SCHOOL: Is this shift in public attitude an issue of national security?NICHOLS: It’s an existential threat to our security. Our democracy is in danger of collapsing, and our enemies are here for it. And again, we had an administration that was completely in cahoots with our worst enemy, Russia, and nobody seemed to care. The Democrats cared, but not enough. Think of the hearings that the Republicans had over Benghazi. We haven’t even had anything close to that on the Trump administration or Jan. 6. And now we’re arguing about, does the infrastructure bill care enough about the constituency that I care about?

It is inconceivable to me that we are talking about anything except the fact that we are fighting a rearguard action to save the constitutional system of the United States of America. And yet here we are with business as usual.

This interview has been edited for clarity and length.