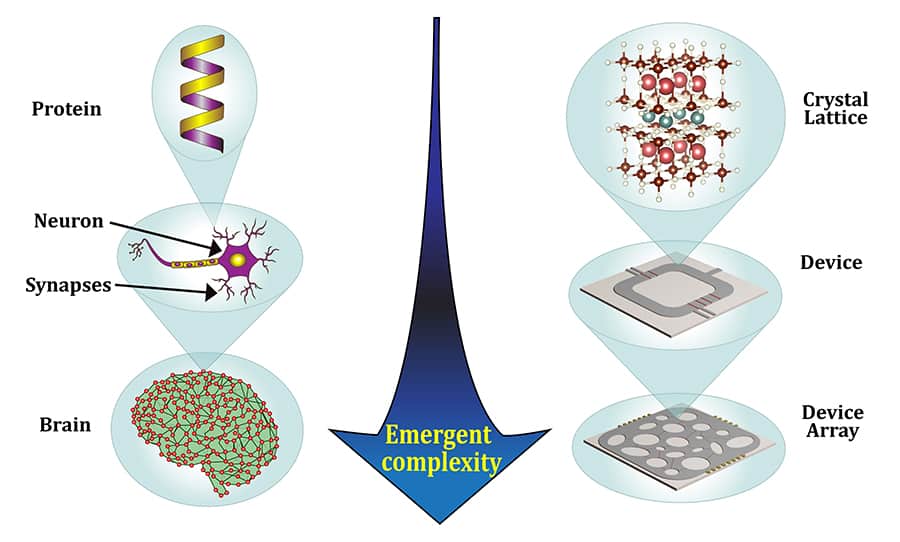 Like biologically based systems (left), complex emergent behaviors—which arise when separate components are merged together in a coordinated system—also result from neuromorphic networks made up of quantum-materials-based devices (right).

Isaac Newton’s groundbreaking scientific productivity while isolated from the spread of bubonic plague is legendary. University of California San Diego physicists can now claim a stake in the annals of pandemic-driven science.

A team of UC San Diego researchers and colleagues at Purdue University have now simulated the foundation of new types of artificial intelligence computing devices that mimic brain functions, an achievement that resulted from the COVID-19 pandemic lockdown. By combining new supercomputing materials with specialized oxides, the researchers successfully demonstrated the backbone of networks of circuits and devices that mirror the connectivity of neurons and synapses in biologically based neural networks.

The simulations are described in the Proceedings of the National Academy of Sciences (PNAS).

As bandwidth demands on today’s computers and other devices reach their technological limit, scientists are working towards a future in which new materials can be orchestrated to mimic the speed and precision of animal-like nervous systems. Neuromorphic computing based on quantum materials, which display quantum-mechanics-based properties, allow scientists the ability to move beyond the limits of traditional semiconductor materials. This advanced versatility opens the door to new-age devices that are far more flexible with lower energy demands than today’s devices. Some of these efforts are being led by Department of Physics Assistant Professor Alex Frañó and other researchers in UC San Diego’s Quantum Materials for Energy Efficient Neuromorphic Computing (Q-MEEN-C), a Department of Energy-supported Energy Frontier Research Center.

“In the past 50 years we’ve seen incredible technological achievements that resulted in computers that were progressively smaller and faster—but even these devices have limits for data storage and energy consumption,” said Frañó, who served as one of the PNAS paper’s authors, along with former UC San Diego chancellor, UC president and physicist Robert Dynes. “Neuromorphic computing is inspired by the emergent processes of the millions of neurons, axons and dendrites that are connected all over our body in an extremely complex nervous system.”

As experimental physicists, Frañó and Dynes are typically busy in their laboratories using state-of-the-art instruments to explore new materials. But with the onset of the pandemic, Frañó and his colleagues were forced into isolation with concerns about how they would keep their research moving forward. They eventually came to the realization that they could advance their science from the perspective of simulations of quantum materials.

“This is a pandemic paper,” said Frañó. “My co-authors and I decided to study this issue from a more theoretical perspective so we sat down and started having weekly (Zoom-based) meetings. Eventually the idea developed and took off.”

The researchers’ innovation was based on joining two types of quantum substances—superconducting materials based on copper oxide and metal insulator transition materials that are based on nickel oxide. They created basic “loop devices” that could be precisely controlled at the nano-scale with helium and hydrogen, reflecting the way neurons and synapses are connected. Adding more of these devices that link and exchange information with each other, the simulations showed that eventually they would allow the creation of an array of networked devices that display emergent properties like an animal’s brain.

“It’s surprising that when you start to put in more loops, you start to see behavior that you did not expect,” said Frañó. “From this paper we can imagine doing this with six, 20 or a hundred of these devices—then it gets exponentially rich from there. Ultimately the goal is to create a very large and complex network of these devices that will have the ability to learn and adapt.”

With eased pandemic restrictions, Frañó and his colleagues are back in the laboratory, testing the theoretical simulations described in the PNAS paper with real-world instruments.

The research was supported through Q-MEEN-C, which is funded by the U.S. Department of Energy, Office of Science, Basic Energy Sciences (DE-SC0019273).