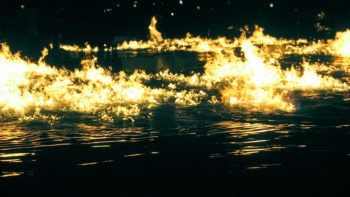 The failure of underwater pipeline systems in the offshore oil and gas industry is cause for concern. Texas A&M University researchers are looking for ways to prevent leaks that often can result in fires and destruction of the environment.

On July 2, a fluorescent vortex illuminated the water’s surface. At an offshore oil and gas rig, a corroded pipe likely leaked, causing gas to bubble to the surface and ignite. The initial leak is cause for concern, and the failure of underwater pipeline systems in offshore locations has been a topic of discussion among engineers for decades.

“As an engineer, we are focused on the corrosion and material failure of pipelines,” said Saadat Mirza, professor of practice in the Subsea Engineering program through the Department of Multidisciplinary Engineering at Texas A&M University. “There are ways to safely build and maintain these systems that researchers like myself are actively pursuing.”

Mirza and doctoral student Naga Venkata Saidileep Korlapati are working with Faisal Khan, professor in the Artie McFerrin Department of Chemical Engineering and director of the Mary Kay O’Connor Process Safety Center (MKOPSC), and Noor Quddus, assistant research engineer in the MKOCPS, to develop Bayesian networks capable of predicting pipeline failure. Additionally, they would like to apply machine-learning techniques to create instruments that can effectively detect potential failures.

Subsea engineers battle harsh, corroding marine environments, as well as corrosive fluids that flow inside the pipeline, leaving pipelines extremely susceptible to damage. There are also many variables to consider when dissecting pipeline systems, such as differing installation processes, diameter and thickness of a pipeline, aging in hardware and materials failure.

For instance, rigid pipelines are often made of carbon steel and are stiff and hard to install. In contrast, flexible pipelines are relatively easier and cheaper to install, but difficult to maintain. However, despite being the industry standard in many countries, flexible pipelines fail frequently due to their limited design that is comparative to that of a rubber and steel hose-like complex structure.

In addition, many offshore systems were built decades ago without strict guidelines set in place for how to safely build structures that can withstand the test of time. Allowing for differentiation creates issues; there are hundreds of reasons a pipeline can fail, dependent on the characteristics of that specific system.

“Unfortunately, many pipelines are not checked for corrosion because they span millions of miles,” said Mirza. “Some are over 50 years old, and they were designed with different design codes without proper maintenance. If there’s a leak, we can only know if it is reported to the government. Small leaks often go undiscovered or unreported. We want to use the available data to create tools that predict failure but also make it easier to determine and report.”

The researchers are developing a Bayesian framework that can foresee pipeline failure based on analyzing past incidents and variables such as structure, installation methods and materials.

“By looking at the available databases, we see the past pipeline failures and can likely determine why they occurred,” said Korlapati. “By researching and condensing the data, we hope to predict pipeline behavior more accurately moving forward.”

The next step in the process is instrumentation. The researchers plan to create technology that can be placed on pipelines to provide data in real time. If successful, the research could potentially help avoid detrimental pipeline accidents, which in turn helps the environment and the subsea engineering industry.

“If we can develop the right tool placed on the correct spot on the pipeline, many problems can be avoided,” said Korlapati. “We are taking the things we can control and using them to ensure reliability.”

So, while a fire on the ocean is certainly scary, Texas A&M faculty and students are working to decrease these occurrences and improve the offshore systems that cause them.