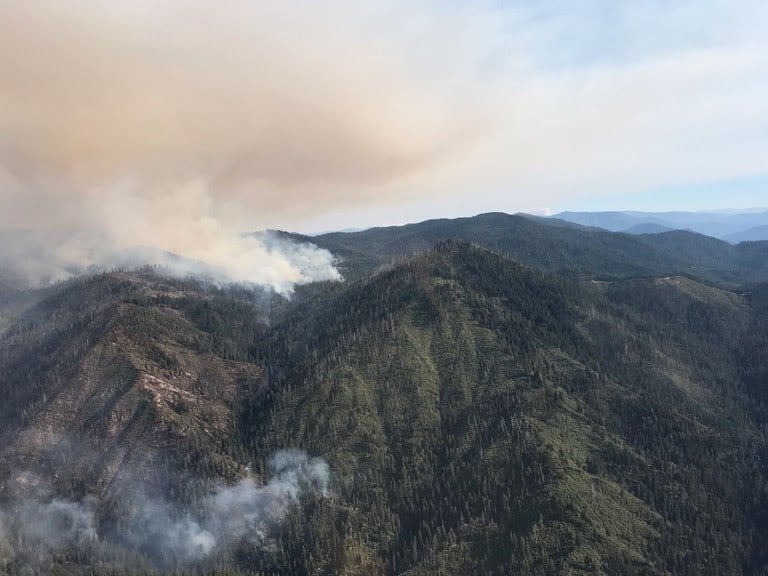 The McCash Fire burns into areas that recently burned (brown areas) and areas that had burned in previous wildfires in the Klamath Mountains. IMAGE: United States Forest Service

Previous fires may hold the key to predicting and reducing the severity of future wildfires in the western United States as fire activity continues to increase, according to researchers from Penn State and the U.S. Forest Service.

“We have a good understanding of how fire used to interact with dry, forested landscapes before we implemented the policy of fire suppression, and how fire seems to be deviating from these patterns today,” said Alan Taylor, professor of geography and ecology and interim director of the Earth and Environmental Systems Institute at Penn State. “Thinking about the fire problem broadly, one of the proposed solutions is to increase the use of prescribed fire and to use wildfires burning when conditions are favorable to reduce the potential for severe canopy replacing fire over time. This has been happening in an ad hoc way over the last 40 years in the Klamath Mountains, so it’s an ideal place to look at these ideas in action and determine what might happen if we implement these practices on a large scale.”

The researchers analyzed 106 fires that burned in the Klamath Mountains in northwestern California and southwestern Oregon between 2002 and 2018. They focused on two types of fires — non-reburns, or the first fires in an area in nearly 100 years, and reburns, or fires in areas that have burned at least once since 1984. They classified areas within each fire perimeter as having burned at low, moderate or high severity.

The research team created maps of daily fire progression for each event and estimated weather conditions at the time of burning. They also took into account the terrain and the amount of fuels — shrubs, leaves and branches on the ground and in the forest canopy — that could have fed the fires.

The scientists then used computer models to predict fire severity and identify the main drivers of the fires. They reported their findings in the journal Ecosphere.

The researchers found that weather and fuels had the largest impact on fire severity in non-reburns. The intensity of reburns, on the other hand, largely mirrored the intensity of the previous fire.

“Many fire-prone forests in the western U.S. haven’t burned in a long time and are in this fire-excluded state with high fuel loading. In these situations, weather has a strong influence and makes fire’s effects on the vegetation difficult to predict,” said Lucas Harris, a postdoctoral scholar in Penn State’s Department of Geography. “As areas experience a wildfire, they transition to this reburn situation. In this scenario, you mostly need to know when the last fire burned and what the severity pattern was like to predict what’s going to happen in the next event.”

The researchers also noted an uptick in severity in the reburn model. This drift upward suggests that in a region like the Klamath Mountains, which has a Mediterranean climate and a six-month-long dry season, fire severity may worsen over time if fires continue to burn mostly in extreme weather.

As the region transitions to a more active fire regime, limiting the severity of the first fires in these dry forests through practices like prescribed burning will be key to avoiding high-severity fires in the future, according to the researchers.

“Our research suggests that if you want to have good outcomes over the long-term, you want the first fire activity in these forests to be in moderate weather conditions — not so hot, not so dry, not so windy — because this will maintain lower-severity fire conditions in future reburns,” Taylor said. “It’s really pointing us to the conditions in which we would encourage prescribed fires or wildfires to burn. These practices will help us achieve and maintain less-severe fire conditions over time.”