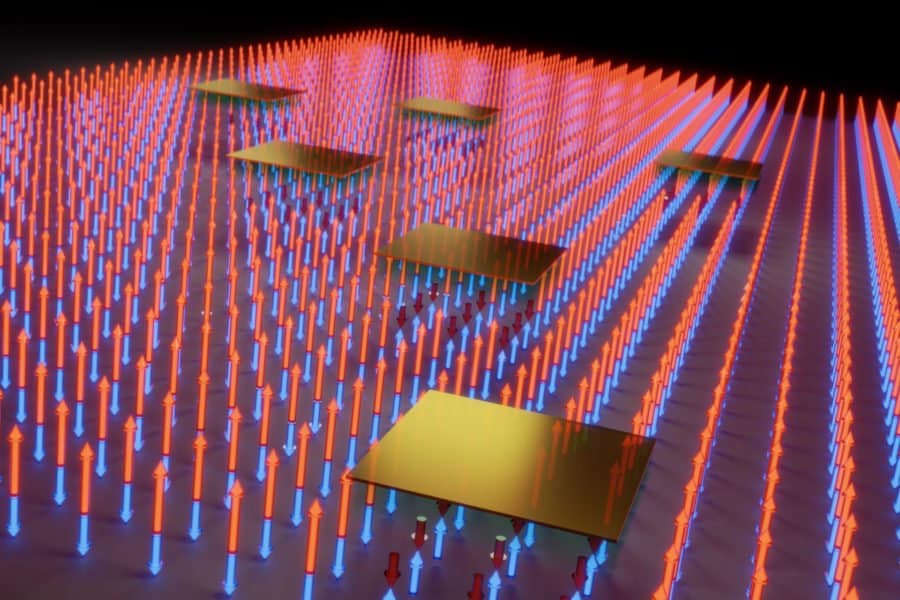 Most of the magnets we encounter daily are made of “ferromagnetic” materials. The north-south magnetic axes of most atoms in these materials are lined up in the same direction, so their collective force is strong enough to produce significant attraction. These materials form the basis for most of the data storage devices in today’s high-tech world.

Less common are magnets based on ferrimagnetic materials, with an “i.” In these, some of the atoms are aligned in one direction, but others are aligned in precisely the opposite way. As a result, the overall magnetic field they produce depends on the balance between the two types — if there are more atoms pointed one way than the other, that difference produces a net magnetic field in that direction.

In principle, because of their magnetic properties are strongly influenced by external forces, ferrimagnetic materials should be able to produce data storage or logic circuits that are much faster and can pack more data into a given space than today’s conventional ferromagnets. But until now there has been no simple, fast, and reliable way of switching the orientation of these magnets, in order to flip from a 0 to a 1 in a data storage device.

Researchers at MIT and elsewhere have developed such a method, a way of rapidly switching the magnetic polarity of a ferrimagnet 180 degrees, using just a small applied voltage. The discovery could usher in a new era of ferrimagnetic logic and data storage devices, the researchers say.

The new system uses a film of material called gadolinium cobalt, part of a class of materials known as rare earth transition metal ferrimagnets. In it, the two elements form interlocking lattices of atoms, and the gadolinium atoms preferentially have their magnetic axes aligned in one direction, while the cobalt atoms point the opposite way. The balance between the two in the composition of the alloy determines the material’s overall magnetization.

But the researchers found that by using a voltage to split water molecules along the film’s surface into oxygen and hydrogen, the oxygen can be vented away while the hydrogen atoms — or more precisely their nuclei, which are single protons — can penetrate deeply into the material, and this alters the balance of the magnetic orientations. The change is sufficient to switch the net magnetic field orientation by 180 degrees — exactly the kind of complete reversal that is needed for devices such as magnetic memories.

“We found that by loading hydrogen into this structure we can reduce the gadolinium’s magnetic moment by a lot,” Huang explains. Magnetic moment is a measure of the strength of the field produced by the atom’s spin axis alignment.

Because the change is accomplished just by a change of voltage, rather than an applied electrical current that would cause heating and thus waste energy through heat dissipation, this process is highly energy efficient, says Beach, who is the co-director of MIT’s Materials Research Laboratory.

The process of pumping hydrogen nuclei into the material turns out to be remarkably benign, he says. “You would think that if you take some material and pump some other atoms or ions into that material, you would expand it and crack it. But it turns out for these films, and by virtue of the fact that the proton is such a small entity, it can infiltrate the bulk of this material without causing the kind of structural fatigue that leads to failure.”

That stability has been proved through grueling tests. The material was subjected to 10,000 polarity reversals with no signs of degradation, Huang says.

The material has additional properties that may find useful applications, Beach says. The magnetic alignment between the individual atoms in the material functions a bit like springs, he explains. If one atom starts to move out of alignment with the others, this spring-like force pulls it back. And when objects are connected by springs, they tend to generate waves that can travel along the material. “For this magnetic material, these are called spin waves. You get oscillations of magnetization in the material, and they can have very high frequencies.”

In fact, they can oscillate upward of the terahertz range, he says, “which makes them uniquely capable of generating or sensing very high-frequency electromagnetic radiation. Not a lot of materials can do that.”

Relatively simple applications of this phenomenon, in the form of sensors, could be possible within a few years, Beach says, but more complex ones such as data and logic circuits will take longer, partly because the whole field of ferrimagnet-based technology is relatively new.

The basic methodology, apart from these specific kinds of magnetic applications, could have other uses as well, he says. “This is a way to control properties inside the bulk of the material by using an electric field,” he explains. “That by itself is quite remarkable.” Other work has been done on controlling surface properties using applied voltages, but the fact that this hydrogen-pumping approach allows such deep alteration allows “control of a broad range of properties,” he says.

The team included researchers at the University of Minnesota, the ALBA Synchrotron Light Source in Barcelona, Spain; the Chemnitz University of Technology; Leibnitz IFW in Germany; the Korea Institute of Science and Technology; and Yonsei University, in Seoul. The work was supported by the National Science Foundation; the Defense Advanced Research Projects Agency; the Center for Spintronic Materials for Advanced Information Technologies; the Korea Institute of Science and Technology; the German Science Foundation; the Ministry of Economy and Competitiveness of Spain; and the Kavanaugh Fellows Program in the Department of Materials Science and Engineering at MIT.