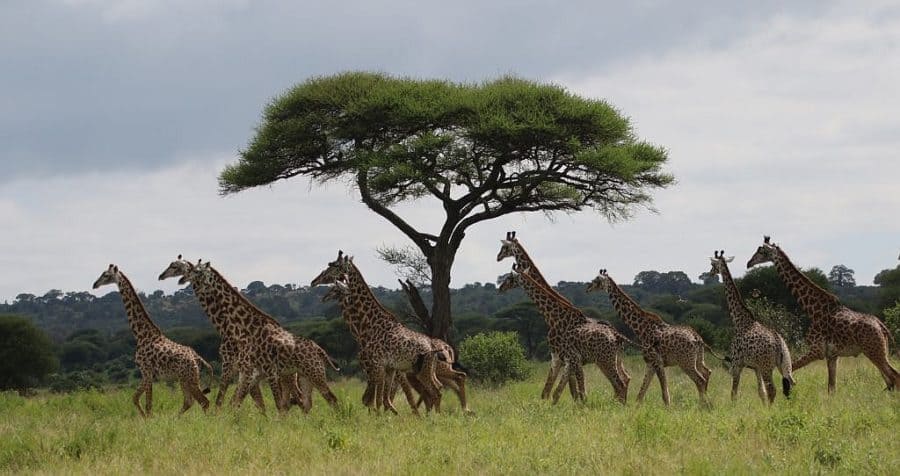 A team of researchers has constructed the social network of more than 1,000 Masai giraffes in Tanzania and found that, while female giraffes have closer “friends” than males, male giraffes have more “acquaintances.” Understanding the complex multilevel society could have important conservation implications for these endangered giraffes. IMAGE: DEREK LEE

Although female giraffes have closer “friends” than male giraffes, male giraffes have more “acquaintances” than females, according to a new study by an international team that includes a Penn State biologist. The study demonstrates that giraffes form a complex multilevel society that is driven by differences in the social connections among individuals, which could have conservation implications for the endangered giraffes.

“The degree to which an animal is connected to others in its social network influences reproductive success and population ecology, spread of information, and even how diseases move through a population,” said Derek Lee, associate research professor at Penn State and an author of the paper. “Information about sociality therefore can provide important guidance for conservation.”

The research team examined social connectedness and social movements of endangered Masai giraffes in the Tarangire Ecosystem of northern Tanzania using data collected over 5 years. The work, led by Juan Lavista Ferres of the Microsoft AI for Good Research Lab, involved constructing the social network of more than 1,000 free-ranging giraffes. The team presents their results in a paper appearing Sept. 27 in the journal Animal Behaviour.

“We found that male giraffes overall had higher social connectedness than females, which means males interact with greater numbers of other individuals than females,” said Lee. “Older males had the shortest social path length to all the other giraffes in the network. This might reflect the mating strategy of males, who roam widely across the landscape searching for females to mate with and make connections in the process. Young males had the most social ties and moved most often among groups, reflecting social exploration as they prepare to disperse away from their mothers.”

According to the study, adult female giraffes tend to have fewer but stronger relationships with each other than males and younger females, a trend that has also been observed in giraffe populations elsewhere in Africa. The researchers previously found that relationships among female giraffes allow them to live longer.

The results reveal an additional layer of complexity to giraffe societies beyond what was seen in earlier research. Previous research showed that adult females in this population have formed about a dozen distinct groups, or communities, of 60 to 90 individuals that tend to associate more with each other than with members of the other groups, even when the groups use the same spaces. The current study builds on this knowledge and found that the full population, including calves and adult males, has a more complex structure: The female communities are embedded within three socially distinct larger groups called ‘super-communities’ of between 800 to 900 individuals, and one ‘oddball’ super-community of 155 individuals in a small, isolated area.

“Among giraffes, adult females have enduring social relationships and form distinct and stable social communities with a relatively large number of other females, while, in their perpetual search for mating opportunities, adult males connect the adult female communities, forming super-communities,” said Monica Bond, a postdoctoral research associate at the University of Zurich and an author of the paper. “This type of complex society has evolutionary and conservation advantages, because the dynamics of the social system should allow gene flow between groups, which is an important part of maintaining a healthy and robust population.”

The current research adds to a growing body of literature demonstrating that giraffes live in a socially structured society, despite the fact that herds have what researchers call “fission-fusion” dynamics, with the size and composition of the population constantly changing as animals move through the environment. Fission-fusion grouping dynamics are common among mammals, such as elephants, bats, some primates, and cetaceans, but, according to the researchers, this study is the first to demonstrate that giraffes reside in a complex society with dynamic herds embedded into stable communities within stable super-communities, all of which are driven by the variation in social connections among individuals.

“The large scale of the study, in terms of the size of the landscape and the sheer number of animals, enabled us to uncover an upper apex level of social structure that was previously unknown,” said Lavista. “Using Microsoft’s AI tools allowed us to visualize and analyze a large volume data to gain meaningful insights about giraffes over the 5 years of study.”

The researchers believe the complex nature of giraffe populations could impact conservation efforts for these endangered giraffes, including translocation efforts that move individuals to new areas. They caution that translocating a small number of individuals to new areas should be limited, because such invasive actions destabilize the intricate web of social relationships among giraffes.

In addition to Lee, Lavista, and Bond, the research team includes Md Nasir and Avleen Bijral at the Microsoft AI for Good Research Lab; Yu-Chia Chen at the University of Washington, Seattle; and Fred Bercovitch at Kyoto University in Japan.

The research was supported by the Sacramento Zoo, the Columbus Zoo and Aquarium, the Tulsa Zoo, Tierpark Berlin and Zoo Berlin, Zoo Miami, the Cincinnati Zoo and Botanical Garden, and Save the Giraffes