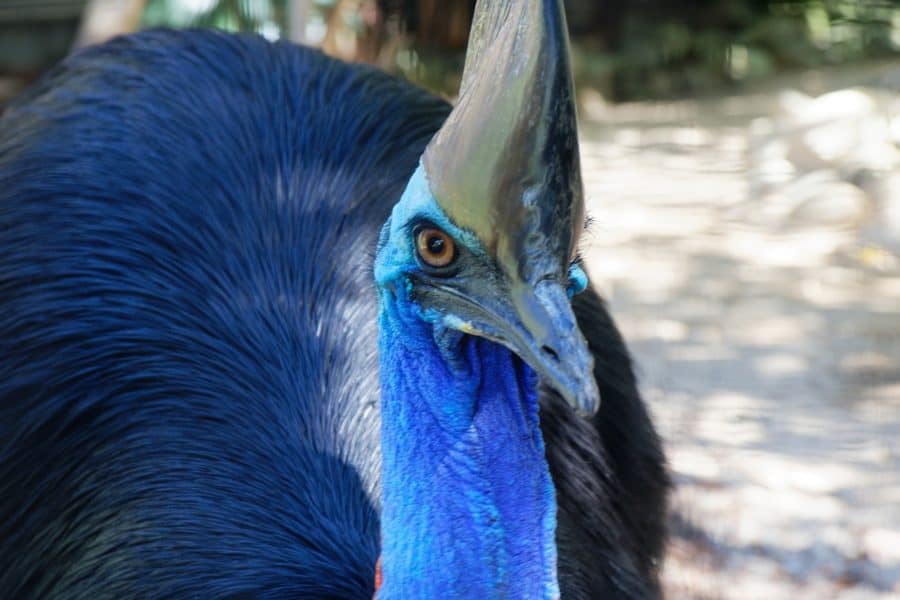 As early as 18,000 years ago, humans in New Guinea may have collected cassowary eggs near maturity and then raised the birds to adulthood, according to an international team of scientists, who used eggshells to determine the developmental stage of the ancient embryos/chicks when the eggs cracked.

“This behavior that we are seeing is coming thousands of years before domestication of the chicken,” said Kristina Douglass, assistant professor of anthropology and African studies, Penn State. “And this is not some small fowl, it is a huge, ornery, flightless bird that can eviscerate you. Most likely the dwarf variety that weighs 20 kilos (44 pounds).”

The researchers report today (Sept. 27) in the Proceedings of the National Academy of Sciences that “the data presented here may represent the earliest indication of human management of the breeding of an avian taxon anywhere in the world, preceding the early domestication of chicken and geese by several millennia.”

Cassowaries are not chickens; in fact, they bear more resemblance to velociraptors than most domesticated birds. “However, cassowary chicks imprint readily to humans and are easy to maintain and raise up to adult size,” the researchers report. Imprinting occurs when a newly hatched bird decides that the first thing it sees is its mother. If that first glance happens to catch sight of a human, the bird will follow the human anywhere.

According to the researchers, cassowary chicks are still traded as a commodity in New Guinea.

Eggshells are part of the assemblage of many archeological sites, but according to Douglass, archaeologists do not often study them. The researchers developed a new method to determine how old a chick embryo was when an egg was harvested. They reported this work in a recent issue of the Journal of Archaeological Science.

“I’ve worked on eggshells from archaeological sites for many years,” said Douglass. “I discovered research on turkey eggshells that showed changes in the eggshells over the course of development that were an indication of age. I decided this would be a useful approach.”

The age assignment of the embryos/chicks depends on the 3-dimensional features of the inside of the shell. To develop the method needed to determine the eggs’ developmental age when the shells broke, the researchers used ostrich eggs from a study done to improve ostrich reproduction.  Researchers at the Oudtshoorn Research Farm, part of the Western Cape Government of South Africa, harvested three eggs every day of incubation for 42 days for their study and supplied Douglass and her team with samples from 126 ostrich eggs.

They took four samples from each of these eggs for a total of 504 shell samples, each having a specific age. They created high-resolution, 3D images of the shell samples. By inspecting the inside of these eggs, the researcher created a statistical assessment of what the eggs looked like during stages of incubation. The researchers then tested their model with modern ostrich and emu eggs of known age.

The insides of the eggshells change through development because the developing chicks get calcium from the eggshell. Pits begin to appear in the middle of development.

“It is time dependent, but a little more complicated,” said Douglass. “We used a combination of 3D imaging, modeling and morphological descriptions.”

The researchers then turned to legacy shell collections from two sites in New Guinea — Yuku and Kiowa. They applied their approach to more than 1,000 fragments of these 18,000- to 6,000-year-old eggs.

“What we found was that a large majority of the eggshells were harvested during late stages,” said Douglass. “The eggshells look very late; the pattern is not random. They were either into eating baluts or they are hatching chicks.”

A balut is a nearly developed embryo chick usually boiled and eaten as street food in parts of Asia.

The original archaeologists found no indication of penning for the cassowaries. The few cassowary bones found at sites are only those of the meaty portions — leg and thigh — suggesting these were hunted birds, processed in the wild and only the meatiest parts got hauled home.

“We also looked at burning on the eggshells,” said Douglass. “There are enough samples of late stage eggshells that do not show burning that we can say they were hatching and not eating them.”

To successfully hatch and raise cassowary chicks, the people would need to know where the nests were, know when the eggs were laid and remove them from the nest just before hatching. Back in the late Pleistocene, according to Douglass, humans were purposefully collecting these eggs and this study suggests people were not just harvesting eggs to eat the contents.

The Smithsonian National Museum of Natural History, the National Science Foundation and Penn State’s College of the Liberal Arts supported this work.