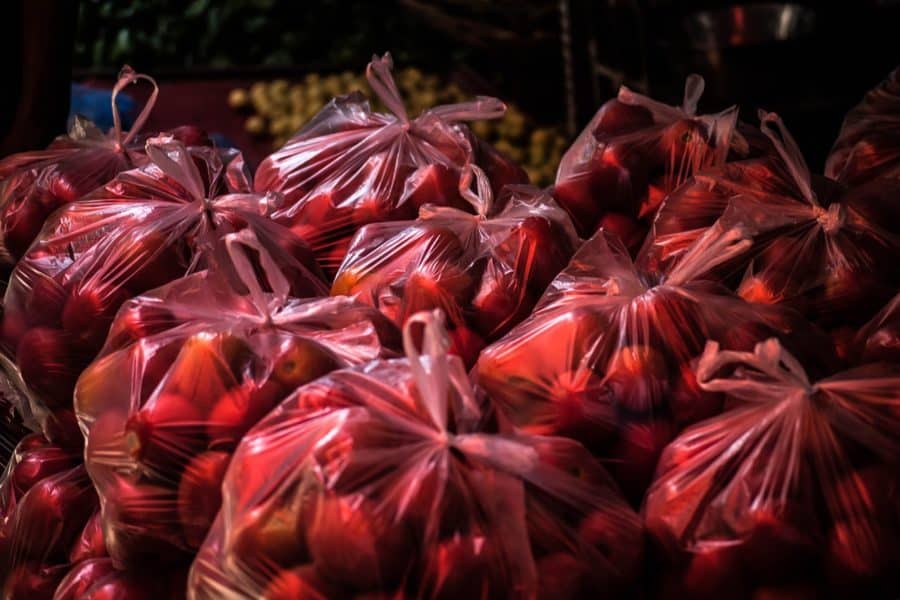 Although plastics are durable and strong, a little sunlight can split them apart into microscopic pieces and spur reactions, producing new molecules that can end up in the environment. But how the polymers and additives in these materials influence this process is a mystery. Now, researchers reporting in ACS’ Environmental Science & Technology show that additives in commercial shopping bags boost sunlight’s ability to convert these solid materials into thousands of dissolved compounds within days.

Once plastic pollution gets into the environment, its fate is still largely unknown, especially in aquatic ecosystems. Some of the plastic items, such as polyethylene shopping bags, float in water, which exposes them directly to the sun’s rays. Previous researchers have shown that the pure polymers commonly used to make these items produce water-soluble molecules and gases when placed in ultraviolet light, a component of sunlight. However, plastics in consumer goods aren’t pure; a variety of carbon-based organic additives and mineral additives are mixed in to give them color or make them more stable. So, Collin Ward and colleagues wanted to see exactly how the composition of single-use shopping bags influenced the dissolved compounds generated by sunlight over short periods.

With X-ray diffraction, the researchers examined four polyethylene plastic bags from big-box retailers and a pure polyethylene polymer film for mineral additives. No additives were identified in the pure polymer, but calcium carbonate and titanium dioxide were found in three of the bags, and only calcium carbonate was found in the fourth bag. Next, the researchers put pieces of the plastic bags and the polymer into separate containers with water, and then in the dark or under simulated daylight for up to a week. Some water-soluble compounds were released from the different pieces in the dark. But in sunlight, more compounds were released, ranging from 5,000 to 15,000 dissolved compounds, which equates to 1.1-fold to 50-fold increases over the number of compounds released in the dark. Of the approximately 9,000 molecules generated by the pure polymer when exposed to sunlight, only about a quarter overlapped with those from the bags. Based on these results, the researchers say that sunlight’s reactions with solid plastics can transform them into a plethora of water-soluble compounds whose levels and identities vary, depending on the additives used.